Skip to content
Home » Blog » Father’s Day: What I Learned from Baseball

My love of baseball was one of the things that I definitely picked up from my Dad as I was growing up. He played from his youth, all the way through high school and to college on a baseball scholarship, his possible career ending in a bad motorcycle to automobile accident (the cars almost always win in those battles). He coached a number of my baseball teams as I was younger and I ended my playing days at the high school level. 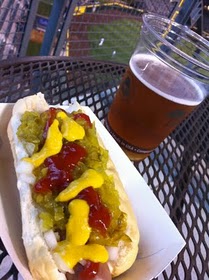 So it was particularly appropriate that on the night before Father’s Day, I found myself in Seattle with no plans and only about four blocks away from the Safeco Field, which is one of the best of the new baseball parks in America. I walked on over there right around the time for the first pitch, bought a ticket in the upper deck on the first base side, bought a bratwurst with kraut and a large microbrew, and took my seat.

As I sat there watching the Mariners play the Phillies, I made some notes in my notepad on my rather large “to-do” list. I quickly had a complete feeling of peace wash over me.

It was just what I needed.

Sitting there, I flipped over from my “to-do” list and jotted down some notes about some life lessons I have learned from my favorite game:

* Multi-tasking in the enemy and pen and paper is your friend. I am one of the worst multi-taskers around. I have read the studies that say that though we think we are being productive when we multi-task, we are deceiving ourselves. I know those studies are right and I need to stop trying to do so much at the same time and concentrate on one thing at a time. As I sat in the stands, without a cell phone, without a laptop, without a camera, I quickly realized I need to function this way far more often. I watched the game, drank my beer, and occasionally jotted down notes, old-school style, and my thinking was so much less cluttered. Plus, I just felt better. 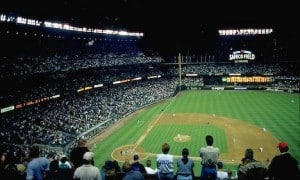 view from right about where I was

* Failure isn’t that bad a result sometimes. Even the very best hitters in the world make an out, which is basically failure, about 7 times out of 10. Even the greatest baseball hitters will occasionally go into slumps where they don’t get a single hit for days upon days.  Still, they keep practicing their craft everyday, showing up for work knowing they might not be getting the results they want, but that they can’t always control results, but they can control their effort. Those of us that expect to knock every project out of the park or are afraid to put ourselves out there on the line unless we are almost 100% confident of the final results could learn something from their courage and tacit acknowledgement that results are far from guaranteed.

* Luck plays a large part of life. I have previously written about “The Good Fortune of the Geography of Birth” and the simple luck of where we were each born into, which is probably the largest bit of luck that 95% of those reading this will ever experience, but luck plays such a role in our lives. In baseball, you can hit or pitch a ball perfectly, but simply have a bit of bad luck that someone catches or drops the ball, totally out of your control. Or that the ball bounces a little crazy when it hits something on the field and either darts through for a hit or slows up so someone gets you out. We are in control of much of our lives, but most people I know focus much too obsessively on the things that are out of our control or just are simple, plain bad luck. 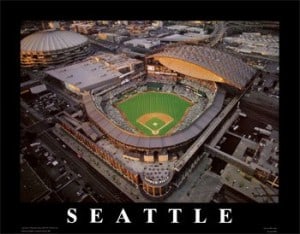 * Green is good. Just walking out of the stadium’s hallways and out into the bowl of the park and seeing the tightly mown grass was enough to cause a large smile to cross my face. Safeco Field is in the industrial part of Seattle near the docks, so going up the stairs to my upper deck seats also meant I could see the waters of Puget Sound off to my right before I walked in. Water and green — two of the things in nature that make me happiest.

* The joy of children is infectious. From immediately behind me at some point early on in the game, I heard the excited cry of a boy that was probably about seven years old, “that was a double play!!” Just a routine play in a regular season baseball game, but brought out the excitement and joy that only a child can bring to something. Later on, he was rooting for both teams alternately, depending on who was doing something interesting, and someone jokingly asked him, “which team are you rooting for anyway?” He just shrugged his shoulders as if to say, “just here having a good time, dude.”

* Obnoxious loud people can be really annoying. There were a few idiotic guys in their early 20s a few rows in front of us that keep inappropriately yelling obscenities, standing up and blocking people’s views and otherwise just being jerks. To the credit of the crowd and the Mariners, the ushers eventually escorted them out, after a number of people in the crowd complained. Side note: adding alcohol to the mix only increases all the negative components, especially the volume.

I have written about many of my loves at various points on this website.  My love of my passport, my love of music, my love of wine. All of those and more are things that help slow the world down, in the way that only things that bring you peace can do. The heart of baseball has not changed since then, even through equipment like BBCOR certified bats, and high performance batting gloves exist.

But give me a bratwurst with good sauerkraut, a tasty beer, and a seat at a baseball game and all is right with the world.

12 things to do in San Francisco

20 thoughts on “Father’s Day: What I Learned from Baseball”