Skip to content
Home » Blog » 10 Things I Learned in Iceland 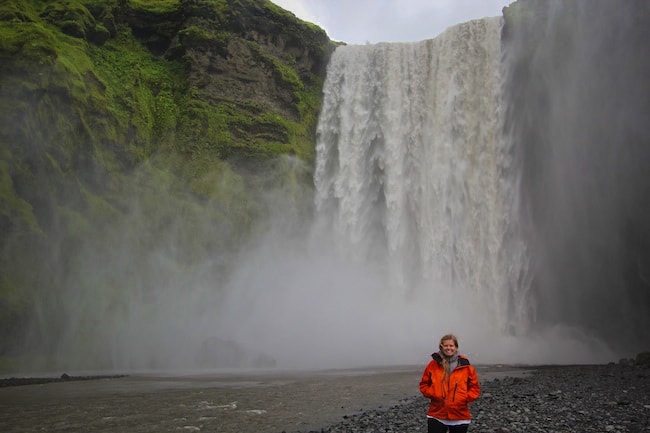 As a full-time traveler, sometimes it becomes second-nature to refer to a place as beautiful, stunning or simply the best place you’ve ever been.

I know I’m extremely guilty of this. I love everywhere.

But after a while beaches blend together, capital cities blur into one, and it becomes hard to distinguish one place from another in our memories. What makes a country special? 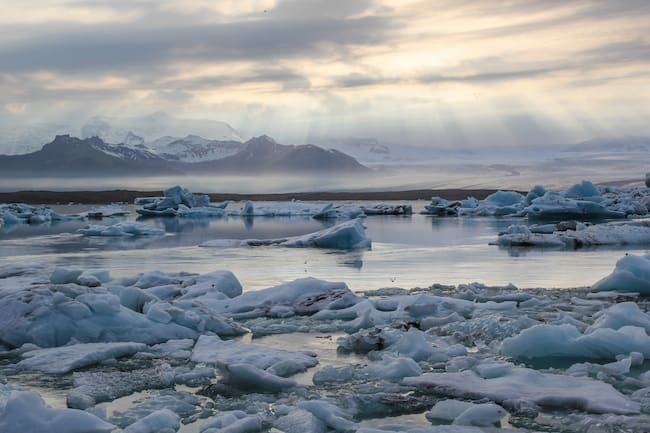 Of all the places I’ve been fortunate enough to lay eyes on, Iceland has to be one of the most memorable. Why?

From its jurassic landscape to mossy lava fields to sharp mountains interspersed with active volcanoes and rumbling glaciers, it only takes about half a day in this northern land to realize you’re somewhere pretty damn special.

After 7 jam-packed days driving around Iceland with Tiny Iceland this summer, apart from falling head-over-heels in love with this arctic land, I also learned a variety of important lessons.

Here are 10 things I learned in Iceland 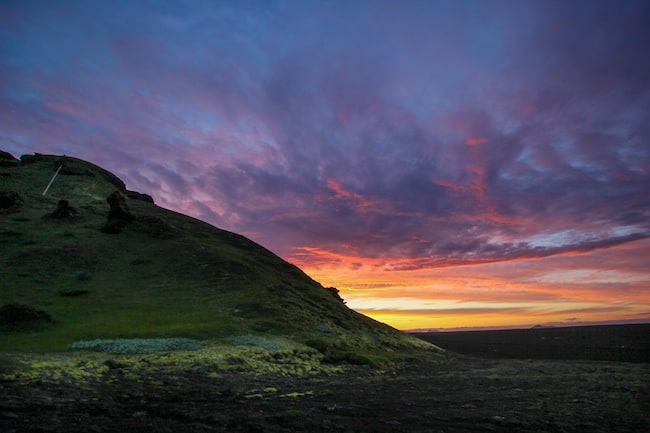 No two ways about it, Iceland is beautiful, and not in your average, “oh isn’t that pretty” kind of way.

I’m talking jaw hit the floor, tears in your eyes, camera jammed in your face every minute kind of way. Iceland is beautiful in the fact that it’s so unique. There is no where that looks quite like it. 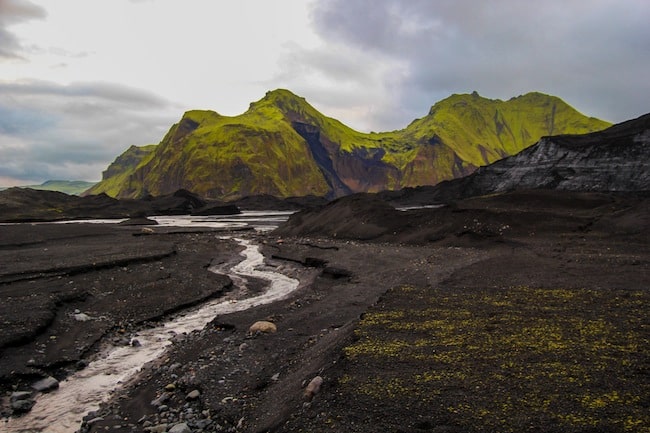 The best part is that the landscape changes so drastically. One minute you’re driving over beautiful green mountains in the south, next your on a black sand beach, then you’re driving by a glacier then you’re in a stinky geothermal area.

And don’t even get me started on the waterfalls. Everywhere you turn in Iceland you’ll see a waterfall twinkling between mountains or roaring over bizarre rock formations.

Iceland has the kind of landscape that will leave you wondering if you’re still on earth. 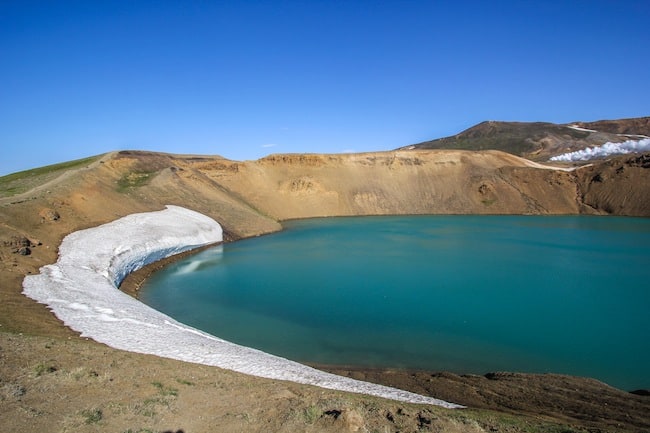 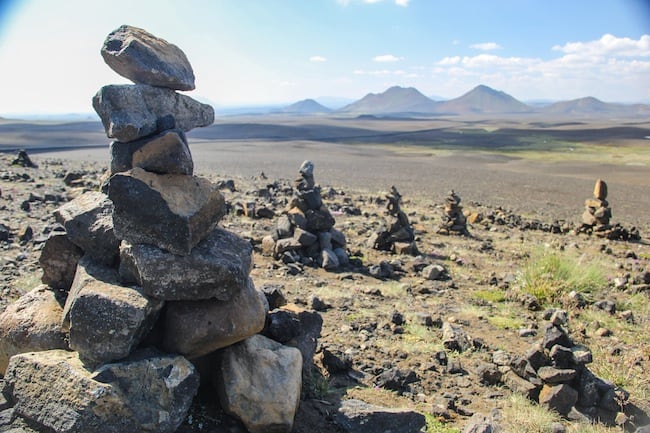 2. The weather is really, really unpredictable

If I learned one thing in Iceland in July, it’s that you can’t predict the weather. Don’t even try.

No matter where you’re going, make sure you have clothes for all weather. In the span of 7 days I went from wearing a parka and wool hat to wearing rainproof everything to shorts and a bathing suit. 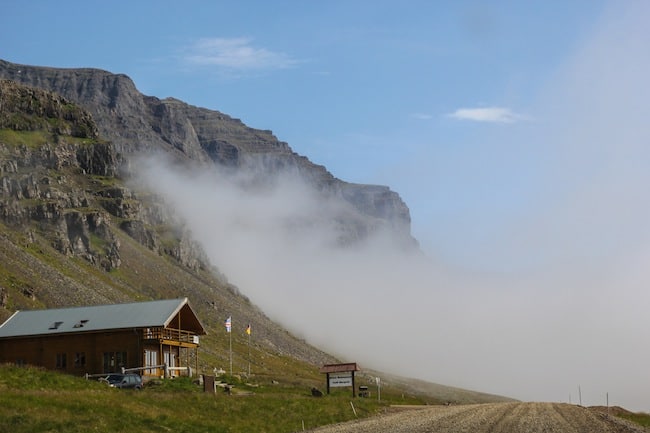 Driving from one spot to another, sometimes we’d go from blue skies and sunshine, to visibly entering fog so thick you could only see 10 feet in front of you. Sometimes it would pour rain all day on one side of the mountains and then be clear on the other side. It’s bizarre but fascinating. 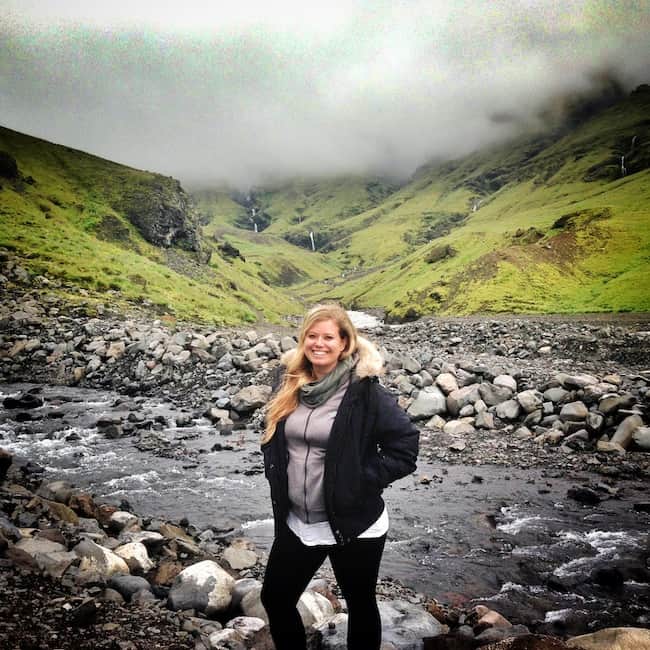 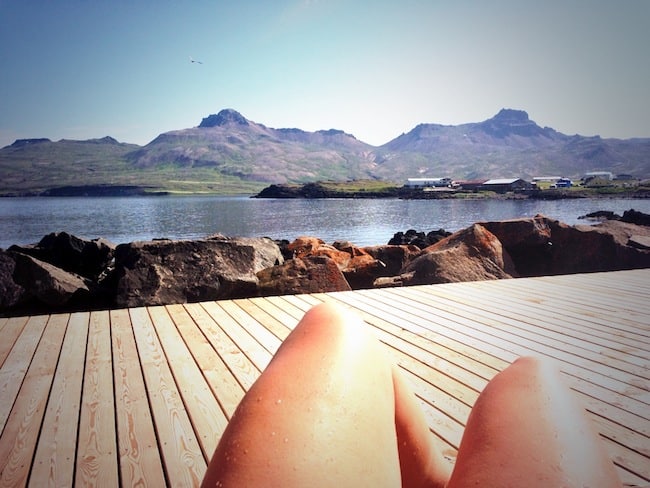 That whole thing about how Icelanders believe in elves and fairy folk, yeah that’s not too far from the truth.

Huldufólk or the Hidden People, hold a special place in Icelandic folklore and legend, and generally take the blame for unexplained problems and weird occurrences during building projects around the country.

In a 1995 study, 70% of Icelanders believed in elves while 6% didn’t, and 23% were unsure while 1% refused to answer. That’s right 6% of Icelanders don’t believe in the hidden people. Holy crap, how awesome is that? 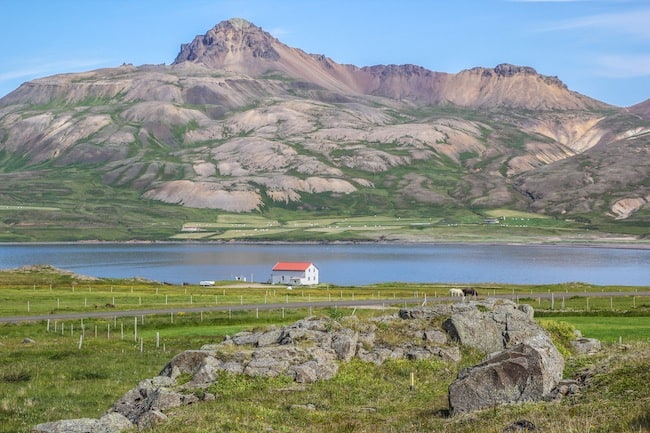 In the far reaches of eastern Iceland, way off the Ring Road and over unsealed mountain roads, you’ll find Borgarfjörður Eystri, a small elf town thought to be home to the elf queen.

In this remote part of Iceland, where you’ll drive for hours without seeing a single soul and with no 3G either, you can begin to understand why people still believe in mysterious creatures. 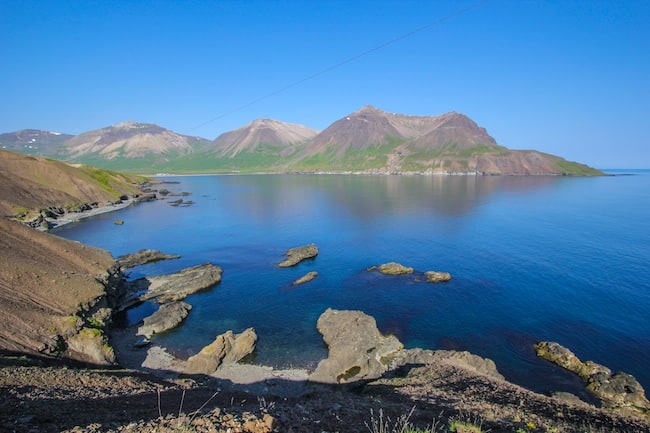 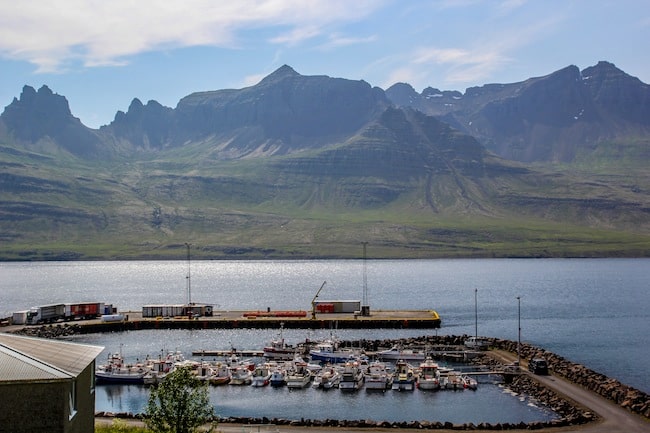 4. Stock up on your booze in the airport

No two ways about it, Iceland isn’t a cheap country to visit, and booze is no exception. While there are definitely ways to explore Iceland and not spend heaps of money, one of my best tips is to buy your alcohol in Duty Free in Keflavík airport before heading out.

At the risk of sounding like an alcoholic, I could tell you just to save your money and not drink at all in Iceland, but where’s the fun in that? And let’s be honest, would you listen?

How do I phrase this delicately? Icelanders know how to throw down. I bet you $100 any Icelander can AND will drink you under the table. There is a fascinating booze culture just waiting to be explored in Iceland, make sure you’re prepared.

Because of outrageous alcohol taxes in Iceland, there is over a 100% markup in price on booze from Duty Free to bars and liquor stores in Iceland. Keflavík makes it easy too. Before heading to collect your luggage, the airport is structured in a way that you have no choice BUT to pass through the world’s biggest Duty Free alcohol store, with shopping carts and everything

So don’t forget to stock up on your Viking beer before leaving because you will need it later. Especially if you’re doing a road trip with friends, you know, because Iceland also has no open container laws for cars (now I do sound like an alcoholic). 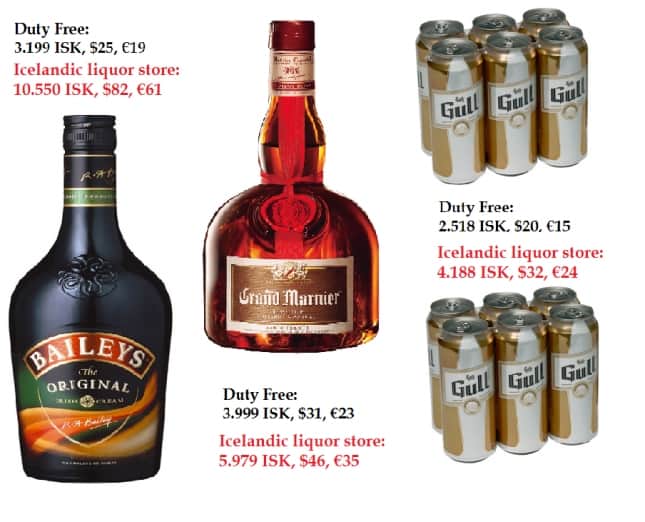 Because of Iceland’s geothermal landscape, there are tons of great spas, hot springs and warm pools to soak in all around the country. Some are off in the mountains in the middle of nowhere, while others have been more commercialized.

They are all fabulous. 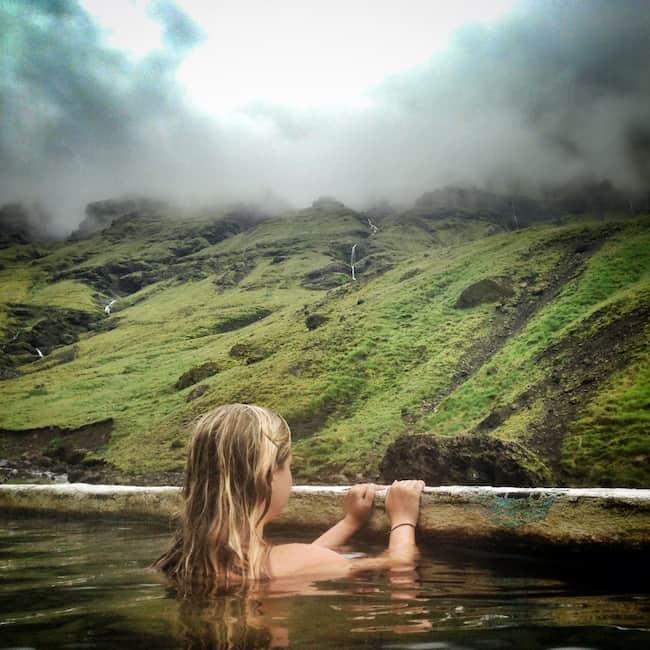 One of my favorite hot springs is at Seljavallalaug, the oldest swimming pool in Iceland. Tucked up in the mountains next to a river in the south, it’s a bit of a walk to get to but it’s so worth it. The water is a bit dirty, still pretty ashy from the volcanic eruption in 2010, but it’s a great place to hang out for the afternoon.

If you’re a bit more civilized, head to Laugarvatn Fontana, geothermal baths near the Golden Circle. We spent a late afternoon hopping from hot pool to hot pool in the damp fog, relaxing in the warm water after a long flight over to Iceland. 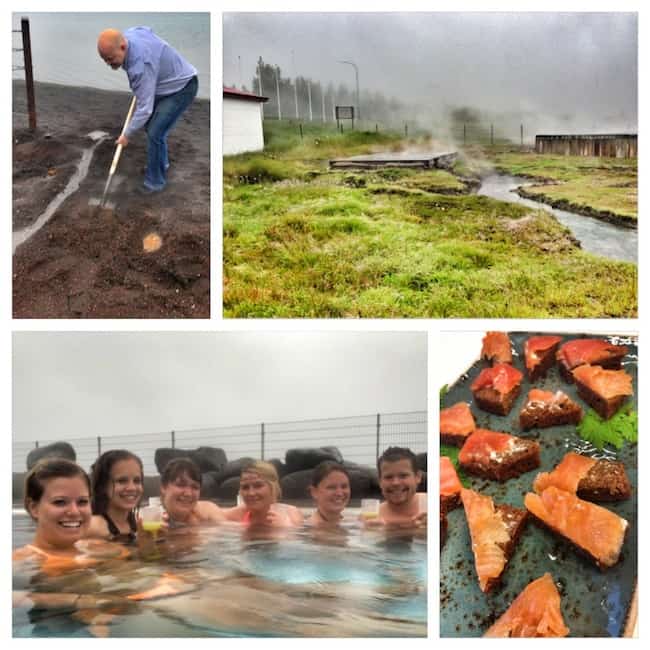 While hunting elves in Borgarfjörður Eystri, we also took the chance to jump into the ocean while hanging out at a local spa at the Blábjörg guesthouse. You can sit in various hot tubs out in the sunshine overlooking the harbor and beach, but I don’t suggest jumping in the ocean. That hurt like hell.

So don’t forget your swimsuit and a towel, you never know when you’re going to need it! 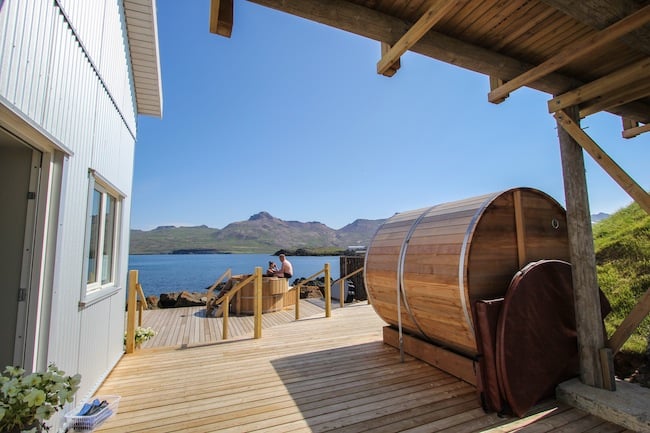 To say that tourism has exploded in Iceland in the past few years is a massive understatement.

This means that there is not always the infrastructure or safety net in place that you would often find in more popular tourist destinations.

Because Iceland is such an unpopulated place with wild weather and occasionally dangerous landscapes, it’s really important to be smart when traveling there. You wouldn’t believe the amount of stupid shit people do while there. 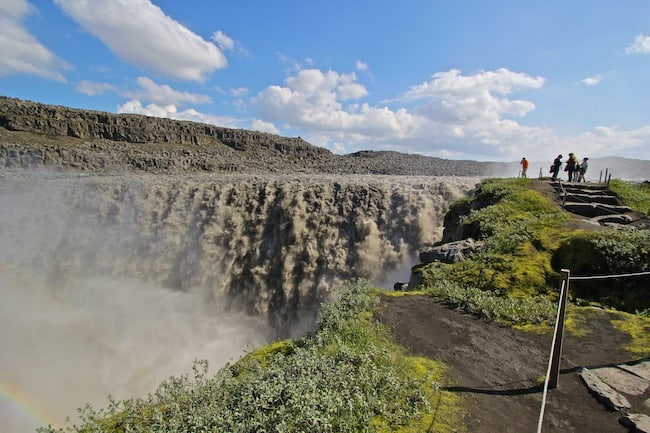 I think perhaps the most dangerous thing is pulling over on the side of the Ring Road to take photos. Yeah I get it, it’s not a busy road; you can definitely drive for a while and not see other cars, but that doesn’t mean you can just park your car on it and get out. There are always pull-off areas and farm entrances, just wait until it’s safe. Driving the south coast of Iceland is beautiful… don’t ruin it for everyone else.

A lot of the huge waterfalls and major (and minor) natural wonders are not properly monitored; i.e., there aren’t ropes or guardrails to keep idiots from falling off them. It’s left up to you to be safe. So don’t get to close and fall off! 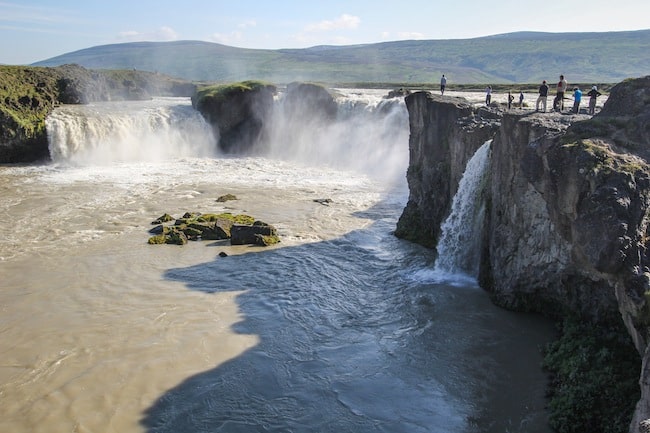 7.  I can’t pronounce ANYTHING

Icelandic is hard. Like really hard. Have you seen some Icelandic words before?

But the fun part is just trying. Luckily Icelanders are patient and friendly, so you never feel bad about completely butchering their beautiful language. Equally lucky, almost everyone in Iceland speaks perfect English so you’re never stranded for long.

By the time I left Iceland, I was lucky if I remembered how to pronounce the names of the places we visited. 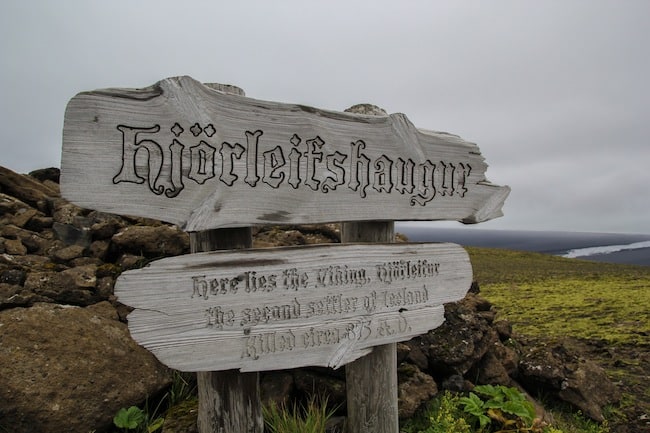 Driving around Iceland you will see lots of fields with the famous Icelandic horses; pony-sized with beautiful manes and a distinct face, it’s so easy for you (girls) to go “awwwww what cute ponies,” but beware if you do.

Nothing pisses off Icelanders and Icelandic horses like being called ponies – they’re horses, ferocious and strong descended from Vikings. It’s insulting to compare them with ponies.

In fact, Iceland takes its horses so seriously that other horses aren’t allowed to enter the country and once an Icelandic horse leaves, it can never return.

I guess you can call it a pony then. 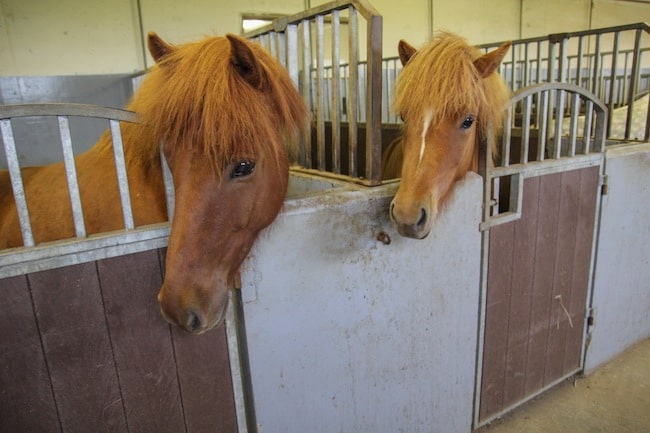 No two ways about it, Reykjavik is hipster city. In a good way.

There are tons of awesome cafes, bars, and places to chow down in town, all independent and all quirky. And there are plenty of great hotels in the Reykjavik city center as well.

From sipping white russians at the Lebowski Bar to eating fusion Mexican at Vegamot to laughing at the quirky posters at the Laundromat Cafe while your clothes dry downstairs, there is no shortage of hip spots and delicious food around town. 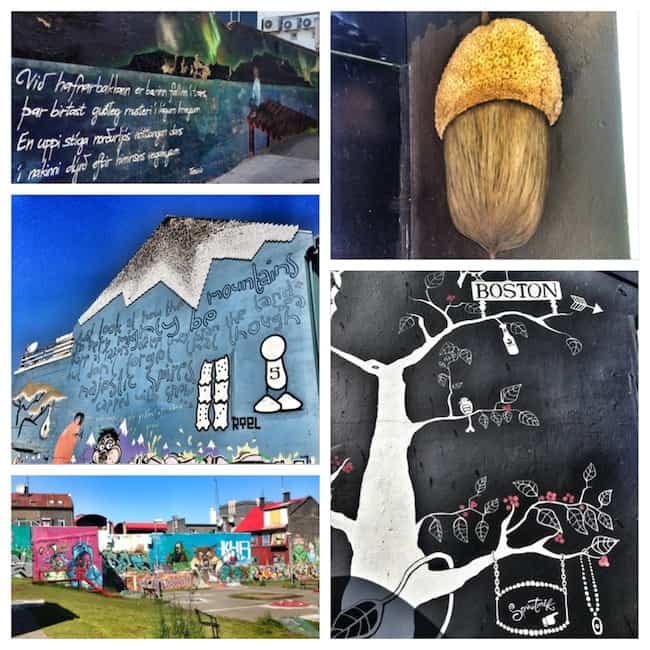 Just don’t be surprised when you see horse, puffin, sheep’s head, whale and rotten shark, you don’t have to order those.

There is vibrant street art scattered around the downtown area and during the midnight sun in summertime, the streets are packed with locals out and about enjoying the good weather, in their thriftshop finest. 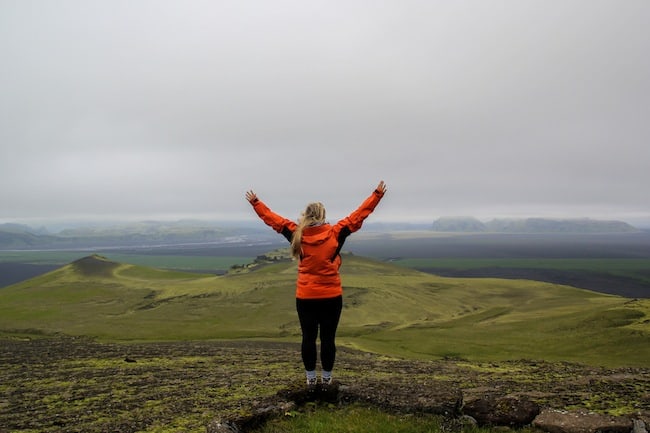 10. Icelanders are actually the happiest people in the world

I had heard rumors of how friendly Icelanders were long before stepping off the plane, and let me just say, it is not false.

One way in which a place often stands out for me is how friendly and helpful the locals are, and Iceland is no exception, if it doesn’t top the list.

I think it has something to do with the fact that Iceland is consistently ranked one of the happiest countries in the world. Yup, that’s right, there’s such a thing as happiness studies, and this brutal wild country that’s swaddled in darkness for half the year tops them all, go figure.

But you see everywhere in Iceland, and it’s another little fact that makes it such a wonderful place to visit. 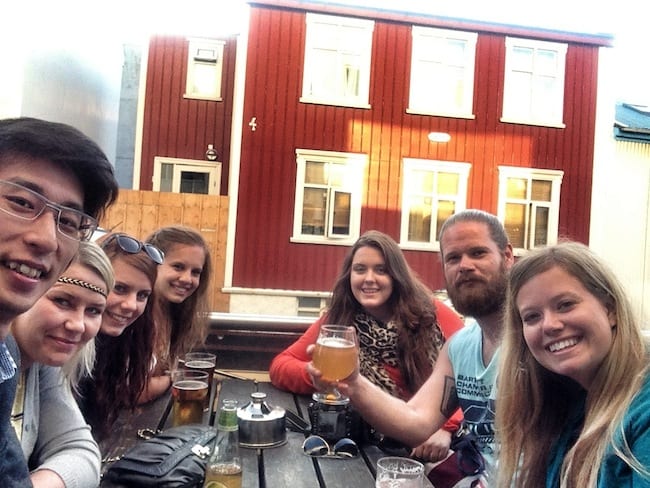 Liz Carlson is a fan of strong coffee, impractical dresses and brutal sarcasm, not necessarily in that order. You can find usually find her wandering around the world, most likely in a cafe or bookstore, frantically trying to finish a story and planning her next trip. She blogs over at Young Adventuress, where she rambles on about things like traveling alone as a woman and how to not be a douche on the road.

5 Things to do on a long layover in Iceland

5 things to do in Iceland

56 thoughts on “10 Things I Learned in Iceland”