I’d have to go back and actually count up the number of posts, but I think there is a fair chance that the place I have written about the most in the last few years has been the Costa Brava region of Spain. This has become a bit of a second home for me and there are so many reasons why.

First, the location is great. As you know, I prefer to take ground transportation as much as possible and from here (the region is just north of Barcelona), I can easily take trains through France and up into the Germany area or the UK. I can also go through the south of France and head over to Italy and Slovenia and Croatia, which is where I am likely headed in a few weeks.

Second, the food and wine are simply fantastic. Supposedly this region has the most Michelin stars of any region in the world. It is a claim I am willing to go around and test the validity of…

But I think the primary reason I am so happy and comfortable here is the good friendship I have developed with Jaume Marin, who I initially dealt with in his role in charge of all things relating to bloggers for the Costa Brava Tourism Board, but from there we’ve just simply become good friends who like to hang out (often over a great gin and tonic) whenever we get a chance to see each other.

Two stories might highlight exactly why I love Jaume so much.

Last year I was flying to Madrid from Brazil on a typical overnight flight. I had booked an apartment in a new town on the coast south of Barcelona for when I arrived, but for some idiotic reason I didn’t book the flight to go through to Barcelona and so I had to gather my luggage at the Madrid airport, take the fast train to Barcelona, then another train south.

I got off the plane, went through immigration and customs, got on the train from the airport to the main Madrid train station and got there with about two hours to spare before my scheduled departure for Barcelona, so I sat down at one of the cafes and had some lunch. I’d slept some on the overnight flight, but I was still a bit tired and groggy from the travel.

I paid my tab, got up and just left my suitcase right there.

I took my smaller backpack, thank God, that has all my computer gear, hard drives, cameras and lens, but I just flat left my rolling bag right there at the table.

When did I realize this? About 30 minutes after I got on the train and we were rolling down the rails. Frantically, well as frantically as I could move as tired as I was, I searched the car compartment I was in, thinking I might have just put it somewhere when I boarded that wasn’t right near me. Then realizing it simply wasn’t there, I started thinking back on where it could be. I’d talked to some train attendants before I boarded the train and thought I might have left it there for a bit. I had the officials on the train I was on call back to the station to see if it was still there or someone had turned it into lost and found and no one had. Then I realized where I had left it, asked if they could call them, and was told the cafes are separate from the train station and they couldn’t help me. 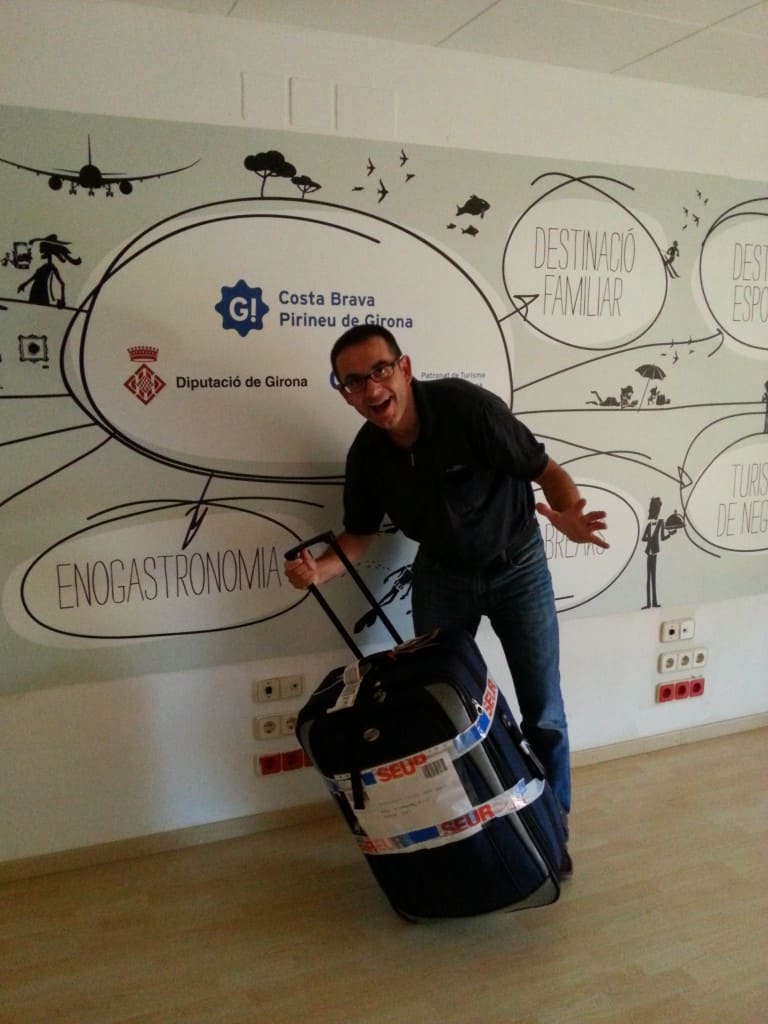 My bag, recovered by the amazing Jaume

At that point, I obviously figured the bag was gone. I wasn’t overly worried about it, since basically there were just clothes in it, but there were also some gifts I was bringing back from that trip to Peru for some people (though they didn’t cost and arm and a leg) and a few little trinkets that I’d like to not have lost.

I especially didn’t like that I’d lost them given how stupidly I had done so — and this foul-up was coming just months after my monumental idiocy in Costa Rica. Last year was not a great year.

When I got to my apartment, I emailed Jaume and told him what happened. I did some internet research and it was incredibly difficult to find any contact information for anyone at the train station that might know something, but I found a few email addresses and telephone numbers and asked if he didn’t mind making some inquiries, since my Spanish is basically non-existent.

A few days later he emailed back and said he had gotten a hold of someone there who somehow found the bag. He had to talk to about a dozen different people and got shuttled through a number of different offices to come up with this information (note to the Madrid Atocha Train Station — a contact email or telephone number on your website for Lost and Found might be a nice thing to add). Even more amazing than him going through all of that to find the bag… he then contacted a Spanish blogger friend who lived in Madrid and was coming to Costa Brava a few weeks later and talked her into going to the station, picking up my bag, and bringing it to him in Girona.

Above and beyond the call of normal friendship. Way above.

As to the second story, Jaume also knows I have become a soccer/world football fan over the years and that I am a particular admirer of the Barcelona team, since I love their style of play. 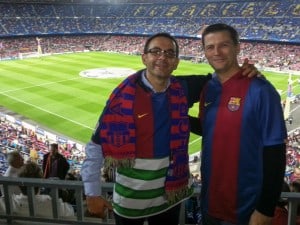 One afternoon I was sitting on my computer working away in Girona and I got an email from Jaume: “Are you doing anything tonight?”

I told him I was free and asked what he wanted to do, assuming perhaps we might be getting a gin & tonic before he headed home to his lovely family. Instead he told me he had a spare ticket to the Barcelona game that night and wanted to know if I could come.

At that point, I’d never been to a real football/soccer game. The only game I’d been to was an exhibition game between the US and Belgium during my Ultimate Train Challenge. So it not only was my favorite team. It was my first real game in person.

And it was a Champions League game. This might not mean anything to the non-soccer/football fans out there, but bottom line, the Champions League is a big European tournament matching the best teams in the whole continent against each other every year.

Massively big game. My favorite team. Seeing it with a completely insane football/soccer fan who has become quite dear to me and… the game was tied with about a minute left in regulation time and Barcelona scored the winning goal, on our side of the field, to set the crowd into a frenzy as the final whistle blew just a few seconds later.

And to be clear, none of the things Jaume and I have done together as friends (I didn’t tell the story about the other email I got last summer: “Have you seen Harry Connick Jr. in concert?”) at this point have anything to do about blogging. I didn’t tell Jaume I was going to write this post and I’m completely certain he is going to be embarrassed that I’ve gone on and on about him. He’s not a wonderful friend because he thinks, assumes, or even expects me to write about any of it. He is just a wonderful friend.

As far back as 2012, I was already high on this part of the world  and I think if you have been following me for some time, you know that isn’t the case for everywhere I write about. Some places just hit me wrong, like Valencia, right down the coast in Spain from here. But Costa Brava is a huge comfort zone for me, for many reasons but most of all because of a great friend I’ve made here.

One of the other things that I love about Girona is the relationship I have developed with one of the apartment rental companies here in town, Girorooms, with whom I have stayed a few times, both on sponsored stays and stays I have paid for out of pocket.

I wrote about them on a previous stay I had with them last year and I stayed again with them a few months ago, because I needed a good place to sit still for a bit and get some work done. They are incredibly friendly and easy to deal with (they’ve solved some internet problems I have had there on a couple different occasions really quickly and professionally, aside from just regularly great customer service).

Instead of the typical photos of my apartment (see the link immediately above if you’d like to see some photos from my last stay with them), I’m going to emphasize how awesome the location of a number of their apartments are.

X marks the spot for where I stayed. 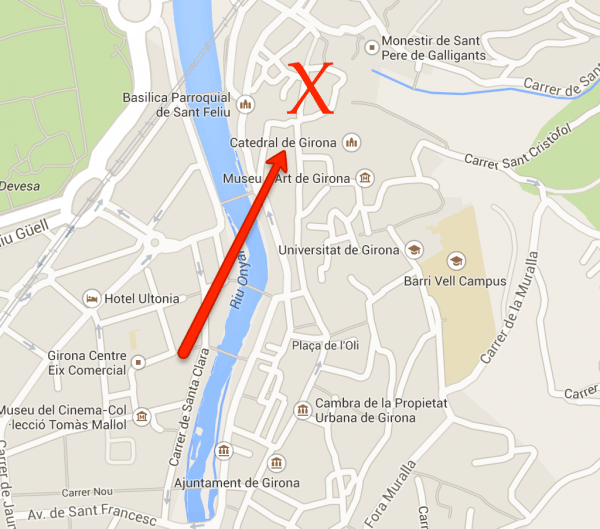 If you haven’t been to Girona, first, you should plan on coming. Second, the area right near the river that flows through town there is the old, historical part of town. Barely an car traffic. Great cafes and places to eat. Beautiful old buildings.

And the last two apartments I have stayed with with Girorooms were right dab in the middle of it all. I can’t wait to stay with them again.