Skip to content
Home » Destinations » N. America » Costa Rica » Why I will never be returning to Costa Rica

Note to my readers. From the time I started this blog in 2008, I have resisted writing chronologically. I have written whenever I felt like it about whatever I felt like, whether it was from travels happening that day or three years prior.

I’m going to do my best to change that from now on and start writing in a mostly, though not always, orderly manner. In moving to a chronological format, I am seeking to try to insert some more discipline in my writing schedule and force myself to produce more content in a timely fashion — this also goes for the videos I will be doing more frequently also.

This post goes back to the end of my trip to Costa Rica in April, after the end of my biking tour with Exodus Travels that ended when I idiotically crashed my bike.

As you will remember, I crashed on the first day of my bike trip in Costa Rica. While I moronically was trying to take video footage while riding my bike on my cell phone, I went over some train tracks, lost control of my bike (though I still can’t remember any of this to this day), and went headfirst over the handlebars of the bike, face first into the asphalt pavement.

The photos after the accident of me are not exactly flattering.

The accident was completely my fault. The country of Costa Rica had no blame on its proverbial shoulders. The roads were fine. No Costa Rican driver cut me off or otherwise cause the accident. Costa Rica, you are innocent entirely in this matter.

But I still have no desire to go back ever again. 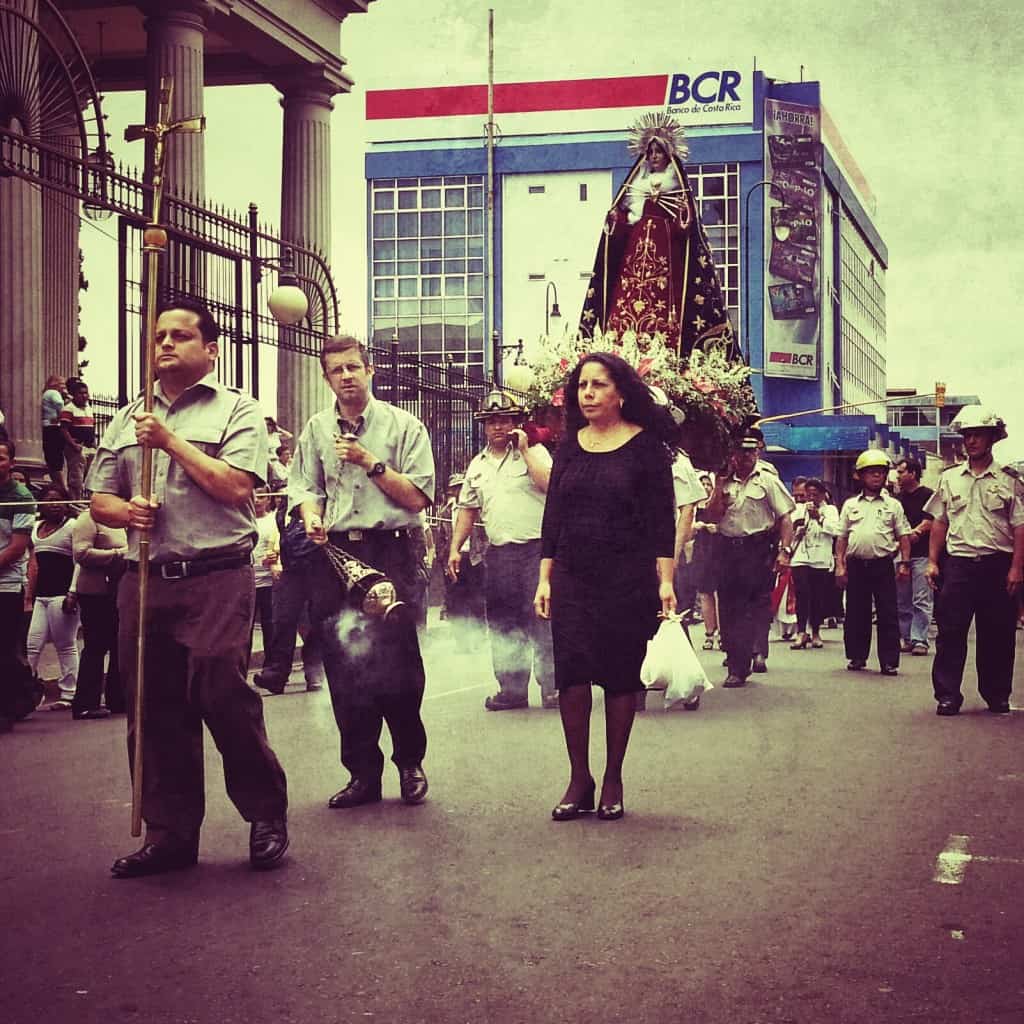 Street parade for the Easter holiday in San Jose

Before I went down to Costa Rica to take that bike tour, I wrote in my announcement post about the trip that I hadn’t really enjoyed Costa Rica much the one time I had been there before:

Costa Rica isn’t my favorite country in the world. I was biased against it before I arrived the only other time I have been there. In the rest of Central America, the locals tend to refer to Costa Rica as Gringolandia, not only because it is the most popular expat country in that part of the world, but also because it has far more North American tourists than the rest of that part of the world (for admittedly good reasons — the tourist infrastructure is more established there than the rest of Central America and it has a long history of political stability, in comparison with its neighbors).

What I didn’t say in that post was that the first time I went down to Costa Rica I got robbed for the first time on my trip. To be technical, I didn’t get “robbed” because that means “taking of money or goods in the possession of another, from his or her person or immediate presence, by force or intimidation.”

It’s the lawyer still in me to be exact with legal terms.

I got “thieved,” but that is such a bad word. Long and short, someone swiped a credit card I had on me and bought a bunch of surf equipment before I noticed the next day. Luckily, my bank was incredible (huge shout out to the Bank of Fayetteville) and dealt with it quickly, canceling the charges and shipping a card down to me in just a couple days. It is one of the many reasons I highly suggest you actually know a real person in your bank before you travel internationally.

Costa Rica, you had nothing to blame in my theft experience in you in 2009.

But I still have no desire to go back ever again. 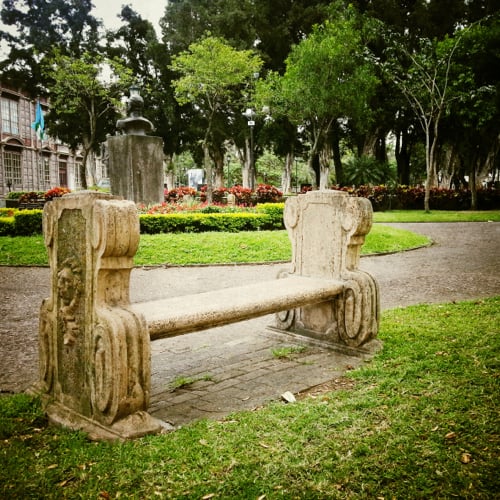 quiet park near my hostel in San Jose

It was not my last experience with theft in Costa Rica unfortunately.

After my accident, I tried to stay with the tour group to complete the tour, take photos and video, and finish the job that I had signed up for. But I simply couldn’t.

The antibiotics had destroyed my stomach and I was having to make the follow van stop every few hours so I could take a bathroom break on the side of the road. Sleeping was difficult, because anytime I rolled over onto my right elbow or wrist, I’d wake up and yelp out in pain. It was just too difficult to be moving every day, trying to follow along the riders, so after four days of trying, I had them drop me off back in San Jose, so I could just go back to the hostel I was staying in before, have a stable place to stay for a couple weeks, and just recover.

My recovery went well. A lot faster than I thought I would, I got my stomach back. My energy level was still really low and I had a fair bit of pain in my right arm, which I basically couldn’t use for any purpose at all, but just having a stable place and being able to talk to friends and loved ones online was making my recovery come along nicely.

Why Tired is Your Enemy

Then I was just dumb and careless.

One of my blogging friends knew someone that was going to be in San Jose for the day that she wanted me to meet. We set up a time to go get an afternoon coffee nearby to where I was staying. I went into my dorm room to leave my computer and cell phone while I ran around the corner to meet her. I had been alone in the room up to then, but I noticed a new dorm roommate sleeping in one of the beds as I went in and tossed my computer and phone under the covers of my bed, before I rushed out.

When I came back, the guy was gone and so was my computer and phone.

There was a ten to fifteen minute period where I just didn’t comprehend what happened. I went through my backpack about five times, not that a 15 inch MacBook Pro is easy to misplace in a small backpack. I knew I had left it on the bed, carelessly, but I just didn’t register that it was stolen.

I’m not going to say which hostel this was, because frankly it was 100% my fault and not theirs, and the hostel owner was a true champion for me. He took me to the police station to report the theft, which took almost five hours, translated everything for me to them, found the passport information for the guy in my room and gave it to the police, and later helped me sort out how to buy a replacement computer in town.

The whole thing was totally my fault. I was just exhausted mentally and physically and didn’t think to lock up my stuff for the half hour I was going to be gone.

It turned out this guy was one of the (very rare, but it happens) dangers of staying in a dorm room. He had checked in to this place just an hour or two before stealing my stuff. He was obviously there for that purpose. He grabbed my computer and phone, stuffed it into a small bag he had, left his bigger backpack with some clothes in it — to make it look like he’d be back, and just walked out.

They never caught him or found my computer. Luckily, there wasn’t much on either of them that I needed — but I did lose some funny video of me talking to the computer a few days after my wreck, making jokes about how I looked for a future video diary (“Yea, I look bad, but you should see the other guy” and “I didn’t know Mike Tyson was in Costa Rica” — perhaps my sense of humor wasn’t in full display in my condition). I also never looked at the footage of my wreck on my cell phone, but it was gone also.

Insurance covered most of my losses and both the theft and my injuries ended up not being a horrible deal at all. Just inconvenient.

Costa Rica, again you had nothing to blame for my theft.

But I still have no desire to go back to your country.

Why Won’t I Go Back?

There isn’t anything wrong with Costa Rica. In fact, it is the Latin American country that I recommend to friends and followers that ask me about taking their first trip to the region because it is so tourist-friendly.

I just have had horrible luck there. I’ve had stuff stolen twice. I got into a pretty bad accident. I had a massive fight, again my fault which appears to be a trend, with a close friend while I was there that I still haven’t recovered from. I really haven’t enjoyed any of my time there at all. There are zero good memories for me in that country.

The world is a huge place and there is tons to see. I’m not saying you shouldn’t go to Costa Rica, in fact, please do. Have a great time and enjoy yourself mightily. We all have different experiences in different places and just because I have sworn off a place should mean absolutely nothing when you consider what you want to do.

But I won’t be back in that country for any reason.

Sometimes a place is just cursed for someone — and Costa Rica is a cursed location for me.

My next trip and the Feel More Alive campaign