Ken is going to end up being the luckiest Lucky 13 interviewee yet — the internet is so horrible here in Lebanon that I haven’t been able to download any embarrassing photographs to add to his replies.  Given how much I love his photography, perhaps that is just karma working in his favor. If you haven’t checked out his photos (including the one that made the cover of National Geographic recently), you are missing out on one of the best out there.

Many of us pretend to be travel photographers — Ken is the real deal.

I get the chance to meet Ken in person in a couple weeks in Jordan and am looking forward to it immensely. He doesn’t know it yet, but I am going to see if he can manage to educate my non-techie self on how to do some basic HDR photography techniques. Don’t tell him — I want to make sure to surprise him with more work talk, when he instead expects me to already have figured out where to buy beer and get him a few for the previous help he’s already given me.

1. Top spot in the world that you want to take photos at, that you haven’t been to yet?

The Sombrero Galaxy. Okay, it’s not “in the world” but, I mean hey, I love Mexico, Mexican food, Mexican beer, Mexican people, and Mexican beaches. So, I’m thinking that there has to be a whole lotta that good stuff in a Galaxy shaped like a sombrero, right? Viva Mexico! 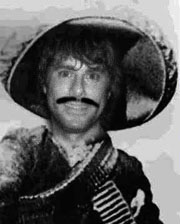 I like it when interviewee provides own funny photo

If I have to choose a particular spot, then I’d have to go with Venice. I made a promise to a dying friend who I loved very much, that I would go and photograph her favourite place on the planet. I really want to do an amazing job when I do go, I’m a bit nervous about the whole thing to tell the truth.

English, French, Spanish, Ukrainian, Italian. Plus I can point at the guy’s beer next to me, then to me, then flash an index finger to symbolize one. Pretty awesome, right? I excel at the last one, especially after consuming a half dozen Kilkenny cream ales.

3. Word or phrase that makes you cringe every time you hear it or read it?

“I’m a photography purist.” You may as well just tell me that you’re dim witted, lazy, pretentious douchebag.

The Montreal Canadiens. The most storied hockey club in the history of the sport. I bleed bleu, blanc, rouge. Go Habs Go! A close second is the Washington Generals basketball team, but learn from my mistakes, do not, I repeat, DO NOT bet on them.

5. The longest you were grounded (or most you were punished in some form) by your parents was when you did _________.

I was 12 going on 13 the first time I saw a dead human being. It happened in the summer of 1959-a long time ago, but only if you measure in terms of years. I was living in a small town in Oregon called Castle Rock. There were only twelve hundred and eighty-one people. But to me, it was the whole world. Oh, wait… That’s not my life, that’s the opening line to Stand by Me.

What was the question again? 😉

Hurt Locker. Best Picture??? What were they thinking? Did the academy members actually watch this movie, or were they just paid off in advance? I would have stopped watching, but I was transfixed by the movie’s breathtaking awfulness.

7. Charity that we should all be more informed about?

The Big Life Foundation is a non-profit organization dedicated to the conservation of Africa’s wildlife and ecosystems, with particular emphasis on countering the recent alarming escalation of poaching of African wildlife, due to increased demand for exotic and endangered animal parts in Asian cultures. I’ll be doing a piece on them and their founder in an upcoming article on my blog. Look for it soon.

8. Musical group you would most want to see live?

Johnny Cash (during the period where he was collaborating with Rick Reuben), playing an acoustic solo set, in a small bar in the middle of nowhere. After all, he’s been everywhere, man.

9. Who’s tweets make you smile the most when we see them in your feed?

I have a love/hate relationship with Twitter. I see it more as an overall experience, and not so much as a way of communicating directly between two people. I’m a big hater of 140 character texting, but to me Twitter is much more than a text message. Unless of course, you feel the urge to tweet that you’re at Starbucks getting a halfcafsycaramelmochafudgewhippedcreamwithbaconbitslatte.

I’m finding new people on Twitter all the time, so the answer to this question is constantly changing. I’ve “met” some incredibly cool people on Twitter and that is what I love about it. The hate part is the time I spend. While Twitter has been a good thing for me, I’d rather be out shooting. One person who Tweets incredibly cool stuff is a fellow Montrealer and traveller, Jodi Ettenberg or @legalnomads. I often learn something new from Jodi’s tweets. Her Twitter stream is a mix of heart, soul and intelligent thought, she’s really worth following!

When I travel, I see lots of people hand holding cameras with long telephoto and zoom lenses. Big mistake, telephoto lenses are quite useless for travel photos (in my opinion), save your money! I usually don’t carry anything longer than an 100 mm for travel photos. Long telephoto lenses are perhaps good for sports, wildlife & photojournalism. I’d even argue that the best sports, wildlife, and photojournalism photographs are not taken with telephoto lenses. I think that there is a misconception about looking like a “pro” when you have a long lens on your camera. Expensive equipment doesn’t necessarily help you take better photos. Better trained photographers with the correct equipment and knowledge of post production, take better photos. Spend the money on some seminars, classes, or better yet, hire me!

11. You favorite movie of all time.

My favourite film is not really a major motion picture, but this masterpiece of a short film has one of the most amazing soundtracks in the history of cinema. The casting is perfect in this dialogue driven magnum opus, and the character development is unparalleled in the annals of screenwriting. While the theme of the film is inspired by a celestial body, the story is more about pure love.

Please do yourselves a favour and take the time to watch the Best Film Of All Time.
Home, isn’t a bad flick either. (Watch it in HD for free online)

12. Would you like to know the exact date of your death now — why or why not?

No thanks, ignorance can be bliss. I’m walking proof.

13. Give us your favorite pizza toppings.

Diamonds, rubies, and saphires. Put on as many as you possibly can please, I’ll scrape off the ones I don’t want to eat 😉

62 thoughts on “Interview with Ken Kaminesky of KenKaminesky.com: Lucky 13 Questions”