Earl is my idol. On December 25th, 1999, he left the USA for a three-month, post-graduation trip to Southeast Asia. He’s basically been traveling ever since.

Amazing.  As you can imagine from someone that has been on the road, and writing, for that long, he has scores of wild and fascinating stories. If you want to get lost for hours upon hours, if not days upon days, with excellent writing and adventures from the world over (70 countries and counting), head over to Wandering Earl right now and check it out.

Well, not right now.  Follow him on Twitter, check out his website later, and for now, read his answers to the Lucky 13 — some of my favorite answers yet:

1. If you couldn’t make a living traveling or writing about travel, what would you be doing for employment?

Well, had I ended up following the career path I originally studied for, I’d probably be a sports agent right now as there was a time when my only goal was to follow in the footsteps of Jerry McGuire. But if I had to stop traveling today, I might try to earn a living playing the banjo, despite the fact that I’ve never even touched a banjo in my life. I’m just addicted to banjo music, so that seems like a natural option.

2. What is the best foreign curse you have heard?

I had to think for a while about this one and still came up empty. So I’ll just go with what crew members on board cruise ships (after all, I used to be one myself) call the passengers, which is ‘cones’. This term is used because passengers are something that every crew member on board tries their hardest to avoid, similar to the orange cones we come across while driving.

3. What is your favorite print magazine?

That would be the Sky Mall Magazine that you find on board airplanes. I have a grand time flipping through its pages on every flight. Reading about ridiculous marshmallow bazooka guns and toilets for your pet always seems to fire up my own creative juices. As a result, it’s no surprise that many of my better ideas for projects, posts or travel adventures have entered my mind while flying through the sky.

4. What is the thing you fear most about old age? 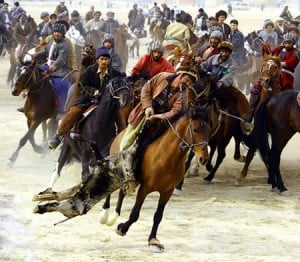 5. Sporting event you have not been to that you most want to see live and in person?

The annual Bazkashi competition that takes place in the Hindu Kush mountains of northern Pakistan. This game is played on horseback, as men attempt to grab the ball (which happens to be the headless carcass of a goat) from the ground, carry it down the field and place it on the other end of the goal line. During a visit to Pakistan a few years ago I traveled through the spectacular Shandur Pass, the location where this event takes place, but I was two months too late for the tournament. So if anyone’s interested, I’m ready for another visit!

6. Most annoying nationality of travelers you have run across?

You know me. I won’t pick on any one nationality 🙂 However, I will say that the Japanese do tend to frustrate me from time to time, simply because many Japanese travelers I’ve met have embarked on some of the wildest and most impressive travel adventures known to mankind. Many a night I find myself lying awake in bed trying to think of ways to match the travel creativity and boldness of many of these Japanese. And this is no easy feat.

(Then again, Earl has signed up for the Ultimate Train Challenge — perhaps in an effort to keep up with the Japanese he’s met.)

7. Location of the last place that you skinny dipped?

Off of a beach on the island of Cozumel, Mexico during my time working on board cruise ships. There might have been some drinks involved, as well as a lovely Hungarian girl. Actually, now I’m curious as to what Reka has been up to these days.

8. Worst dorm room experience you have ever had?

This would be a toss up. First, there was my night at the Salvation Army Hostel in Mumbai that involved my entire body being ravaged by bed bugs and then spending the rest of the night trying to sleep in a metal chair while avoiding the cockroaches crawling around my feet. And then there was my two night stay in a dorm room in Honolulu, which I shared with a 60-year old drunk guy who found it amusing to barge into the bathroom every time I went inside and try to dump his beer on my head.

9. If you could never go to one of the six populated continents ever again, which one would you ban from your life?

Probably Australia, only because I’ve already spent quite a significant amount of time traveling and living here over the past 13 years. And while I do love this country/continent, and would be quite sad to leave it behind forever, the fact is that I’ve seen all I’ve wanted to see, making Australia the only reasonable option. 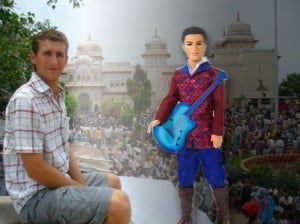 the original model for the Ken doll??

10. Tell us something interesting about one of your ancestors. (farther back than parents)

My grandfather, who worked for the toy company Mattel, played a role in the decision to introduce the Ken doll as a companion to Barbie dolls.

11. Three things you would never want to travel without, aside from the basics like passport and credit card.

My custom insoles for my flat feet (without them I wouldn’t be able to wander too far); a small box of incense (light up one stick and even the nastiest hotel room becomes somewhat bearable); the book Steppenwolf

by Herman Hesse (it’s been in my backpack ever since my first trip).

I have no idea how the cast of the Twilight saga got rich and famous, because they have zero talent.

13. Give us your one paragraph obituary, a long time down the road.

Wandering Earl has passed away, while wandering. Happily addicted to North Indian curries and with armpits clean shaven until the very end, Earl attempted to prove that a life of constant travel is not some crazy fantasy or escapist phase but a perfectly reasonable lifestyle option instead. So he

traveled to as many countries as possible, lived out of a backpack, figured out ways to earn non-traditional income and tried to fill his life with first-hand educational experiences.

Some people thought Earl was too serious, others thought he was always a goofball, probably because Earl could be found singing Lady Gaga songs at karaoke one night and then engaging in a three hour meditation session the next. Neither path brought enlightenment but Earl passed away quite satisfied with his time on planet Earth nonetheless, especially after achieving his long held goal of traveling around the world on a camel.