Everyone knows how much I hate Top 10 lists, but after some reflection and convincing from some of my fellow travel bloggers, I have decided to give in and try my first one.

I thought it was important to pick a topic that would appeal to everyone. I didn’t want to be too specific, because in reality, who really cares about those narrow topics?  So no Top 10 Beaches in Australia, or a Top 10 Things to Eat in Thailand or Top 10 Reasons You Should Carry Toilet Paper with You. This is my first one, so I need a big topic that hasn’t been done properly.  Ergo…

We all like to travel, right?  What better than blowing the lid off the best months to travel in… in top 10 form, of course.  It took some exhaustive research and quite some time to narrow the list down to the top 10, but I persevered and got it done.

And let’s be clear, I have personal expertise in this topic — I have travelled in each and everyone one of these months. So this isn’t one of those bogus Top 10 lists where the writer doesn’t know of what he speaks.

(10) January — Start the year right. You are already in credit card debt from all the damn presents you had to buy everyone for the holiday season.  Screw paying off that debt — add some more on top and take a trip somewhere for the only person that really matters — you!

(9) August — It is hot.  It’s Africa hot.  If you have kids, you are so damn sick of them at this point of their summer vacation that the only thing you want is to go somewhere without them, or with them, if you can dump them at some pool all day to play.  Do it. Go, now.  And when those whinny kids want you to help settle some fight down by the pool, just tell them, “not now honey, this drink is medicine for Daddy.”

(8) May –May is named after Maia, the goddess of growth of plants.  Couldn’t be more clear and direct link to travel. ‘Nuff said.

the #1 reason to travel?

(7) October — October has always seemed a neglected month to me.  I mean, what important holidays are in October?  Oktoberfest actually begins in September.  Halloween has been taken over by children on a sugar high and barely slips in on the last day of the month.  Go somewhere and celebrate this undiscovered gem of a month.

(6) September — Speaking of Oktoberfest, good enough reason to travel right there in my book.  I think this should be an international holiday. Someone should start a Facebook page. If Facebook and Twitter can overthrow tyrannical governments, let’s see if it can get something that is really important done. How about #OktoberfestRevolution?

(5) June — It’s freezing out there (now I am talking to my readers in the Southern Hemisphere, bear with me, I am popular all over the world), so get to to someplace warm, like Thailand or St. Barts.  Plus, it is named after the goddess Juno, which means it is the only month named after a woman.  Women of the world — unite in travel.

(4) April — According to Shakespeare, “Rough winds do shake the buds of May.” Well bard, in actuality, April was named from aperire, Latin for “to open buds,” so clearly you don’t know anything about much of anything. Personally, I think a little April travel, if only to show that you know more than that overrated hack is a hell of a reason to get up off the couch. Plus, April 15th is the tax deadline, the time to break out your best tax software and do what everybody loves doing—paying the government. Imitate all the rich people everywhere, dodge paying what you rightfully owe and spend that money in purely selfish pursuits.

(3) November — The month for Americans to give thanks — or in other words, the month where we get a four or five day holiday from work sanctioned by our government.  Given how adverse America is to time off work, use it.  If you insist on making it about family time, go ahead and bring them along to, I suppose.  Up to you.

(2) March — Just say that word to yourself a few times. Doesn’t it just scream to you to get up and…. march off somewhere?  Does to me. 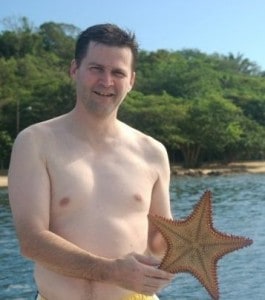 I rule the world based on my killer tan

(1) July — Named after one of the biggest egoists of all time, Julius Caesar.  Hell, this dude thought so much of himself that he crossed the Rubicon and had himself named a god.  And isn’t that what travel is all about in the end? Going somewhere and pretending we are the deity of our own little world?

Come to think of it, I think I just want a photo of my swimming across the Rubicon.

Now, I know what you are asking yourself: “Michael, you hit this out of the park.  It has changed the way I will look at travel henceforth, but what happened to February and December?  Why didn’t they make the cut?”

February is the shortest month, which should be enough reason, but it is also named after Februalia, a time period when sacrifices were made to atone for sins. I sin more on the road than at home, though now that I write that I realize that might be a close call. Regardless, good month to stay and home and contemplate our navels.

December is my birth month, and while I personally always like to be traveling on my birthday, I think it is important for everyone else to stay home and pick out really nice presents for me.  Its name also comes from decem, Latin for “ten,” and ya’ll know how I feel about Top Ten lists…..