The wines of the Middle East are a relatively untold story that I am happy to spread the word about. I was fortunate enough to have a few winery tours in Lebanon and when I got to Jordan for my week-long tour sponsored by the Jordan Tourism Board, I asked if there were any spots for wine I should hit while I was there. They said Zumot Wines and set it up for me, so I headed over there after my tour of the Royal Automobile Museum.

As usual, their advice was spot on.

Omar Zumot is a legend in the wine community in the Middle East and rightfully so. His father, who was a wine trader in the region for decades, once told him “this land can make great wine.”

His father was right. And everyone knows how much I like great wine.

In 1996, Omar planted his first grapes at Madaba, southwest of Amman. He has ended up planting 34 different grape varieties over time as an experiment to see which varietals work in the region, since there hasn’t been much wine history here in recent years. He is still harvesting from all those different varieties because, as he says, “we are still sorting out what will work. It might take ten more years, or twenty, or fifty.”

I was given the chance to join in on a previously scheduled wine tasting that Omar was doing for a French NGO raising money to expand the Arab Episcopal School. Before the tasting began, Omar sat with me and discussed his winery, the history of the region and his plans for the future. 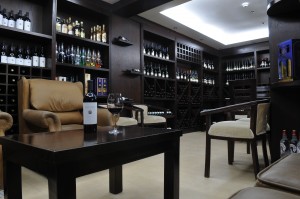 Simply put, he is an impressive guy.

Unfortunately, I didn’t bring my camera with me, so you will have to subsist on my written words, with no photographic support.

The one photo that I would have inserted here was a picture of the plates of food that were provided to accompany the wines we were tasting. Five varieties of excellent cheese, fresh French bread perfectly baked, salami, ham, and a couple varieties of Prosciutto. Heaven. So here are my tasting notes on some of the wines we tasted. Note, I said some, because we must have tasted almost a dozen.

Pinot Grigo (2009) — One of my favorite whites. Non-acidic and quite mellow. A bit young and immature, but far from overpowering.

Fiano (2009) – This is a southern Italian grape that I don’t believe I have tried before. This was the first wine Omar had made from this grape in seven years, as it is difficult to deal with. Best thing about this wine was Omar’s comment: “A subtle wine. If you want a wine to drink at 11 a.m., this is the one.”

Shiraz (2009) – as Omar poured this he said, “a bit young and tannic” and he was right. But here the tannins showed the fruit that is going to burst forth in a few years from this currently tight wine. Full of blackberry flavor. This is a wine that I will love in four to five years when it mellows a bit, some of the tannins drop out, and it opens up.

San Genovese (unknown year… I was drinking a bit now) — Deep and full flavors of chocolate, cassis and blackberry. If this was sold with an Italian label on it in the United States, it would go for $100 a bottle or so. It was visionary.

Cabernet Sauvignon (ummmm) — If you would tell someone this was a $60 Cab from Napa Valley, they would never know the difference. Personally, I didn’t think it was as good as the San Genovese, but then again, I don’t think I’ve had a dozen wines as good as that one.

Pinot Noir (somewhere lost in time) — This wine was the first ever gold metal winner for a Jordanian wine, this metal being won at a competition in Germany. It was extremely well balanced. As Omar handed it to me, he said smiling “try it with the goat cheese.” Not surprisingly, he was right again. Although there was very little acidic taste to the wine to start with, the goat cheese erased even that small amount and left an even more delicate wine on my tongue.

Look, I am no wine expert. My palate is not that developed and I am hindered in a fairly significant way in that my sense of smell is quite poor. That being said, I know what I like and I have tasted a fair bit of wine in my life so far. So take this for what it is worth.

You need to find some of Omar Zumot’s wines, if you can. These are well worth your tasting efforts.

They will be tasted again by me, as soon as I have the chance.