Africa is my first travel love. And after spending a year there, I’m still as smitten as ever. 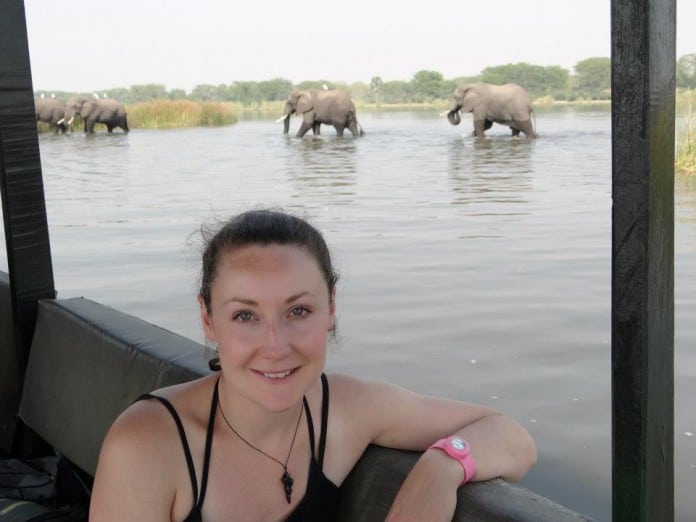 I took my first trip to the continent in 2009 and since then I’ve been around the world and back again But nowhere on the planet captivates me in the way that Africa does. From the crazy, sweaty heat of the big cities, to the great open plains of the national parks, mysterious Africa is sure to excite and intrigue even the most intrepid of explorers.

When I tell people that I travel solo in Africa (especially as a woman), they’re often a little surprised.

“But isn’t Africa… dangerous?” they ask.

News reports and adverts from aid agencies would have you believe that all there is to Africa is disease, hunger and war. Africa does have it’s fair share of problems and there are parts that are dangerous, but it isn’t all like this. In fact, far from it in most places.

Travelling and working in Africa is challenging and rewarding in equal measures which is why I set up my blog, Helen in Wonderlust, to share my stories, to inspire people to visit and to help dispell some of the misconceptions surrounding the continent. 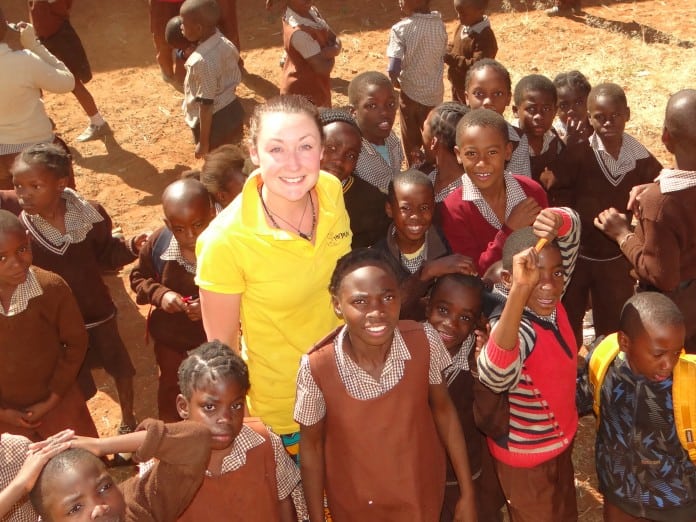 My first trip to the continent started in Zambia, a landlocked country in southern Africa, bordered by 8 other countries; Democratic Republic of Congo (DRC), Tanzania, Malawi, Mozambique, Zimbabwe, Botswana, Namibia and Angola.

Zambia quickly got under my skin and is still, to this day, my favourite country in the world. There are so many reasons why I love it so much, but here’s a small selection…

The first European to clap eyes on the waterfall, Scotsman David Livingstone was so enamoured by what he saw, he wrote:

“Scenes so lovely must have been gazed upon by angels in their flight.”

He named them, Victoria Falls after Queen Victoria, but they are known locally as Mosi-oa-Tunya, which means ‘The Smoke That Thunders’. 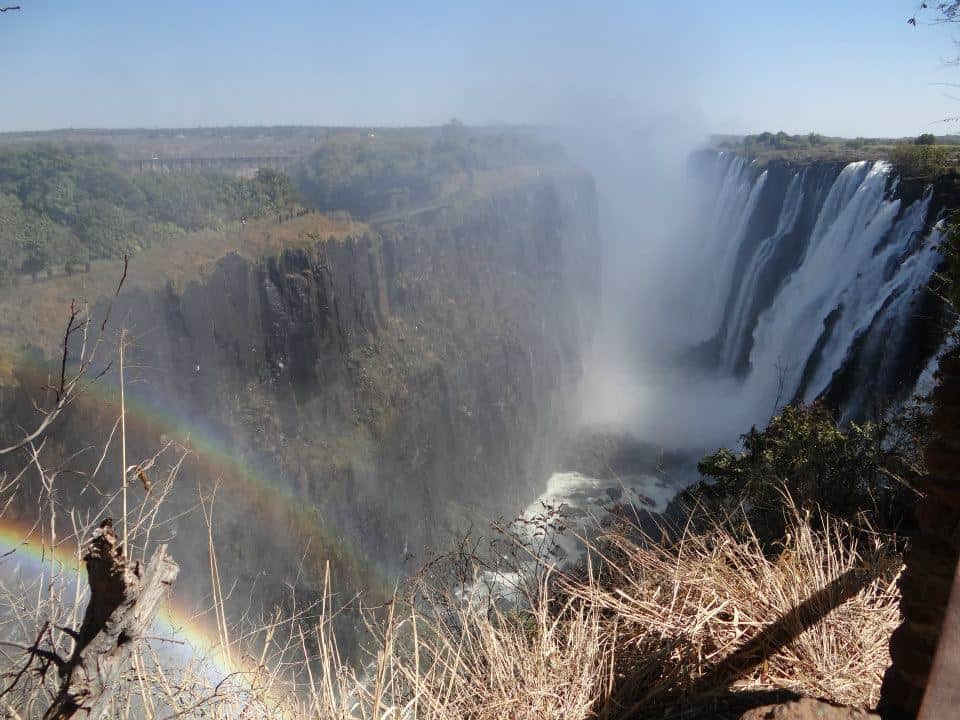 When the water level is high, mist can be seen rising into the air from miles around, accompanied by a tremendous roar as the water pours into the gorge below. 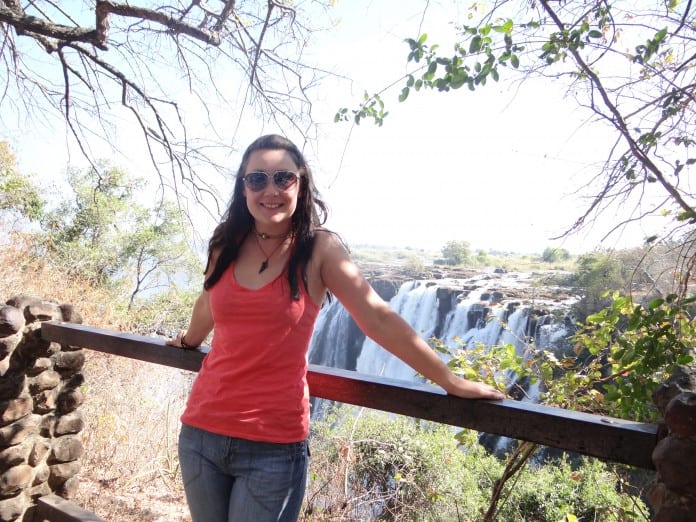 The park is open all year round, but you might be surprised how much difference a few months can make. In May the falls are in full flow, by October, they’ve dried up to a dribble (no smoke OR thunder). But they’re no less spectacular, water or not. Taking the trip in the dry season allows you to see the full magnitude of the gorge without getting soaked, as well as take a trip to the Devil’s Pool, something you can’t do when the water level is higher.

2. Afternoon Tea at The Royal Livingstone

If you’re looking for a little bit of luxury during your Zambia trip I know the perfect place to find it. 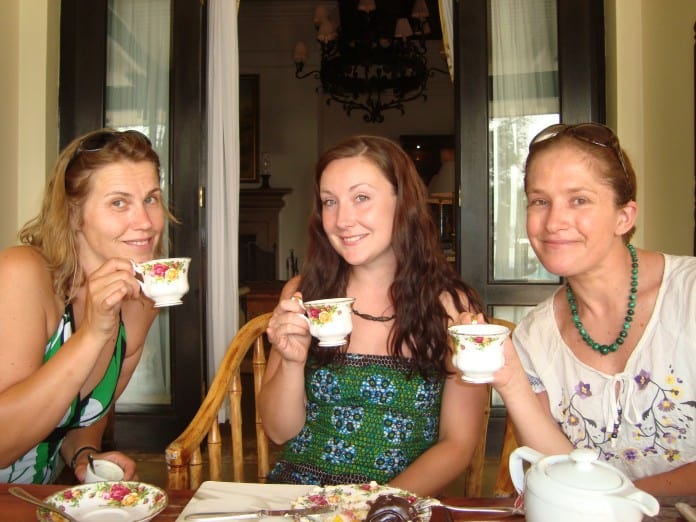 1okm outside of Livingstone town, on the banks of the Zambezi, stands The Royal Livingstone, a luxurious 5 star + hotel. Every day, they serve afternoon tea in beautiful china cups and accompanied by all the cake you can eat. 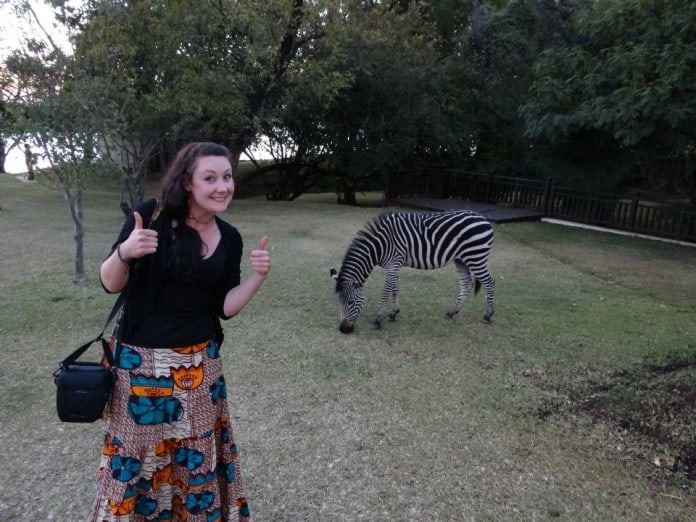 Occasionally zebra or giraffe wonder into the grounds and ververt monkeys frolic on the grass. If you’re not careful, they may even steal a bit of your cake! As the sun sets, guests are invited to head down to the deck to watch the day fade into night and sip cocktails as a flautist plays a hypnotic tune. Somewhere in the distance you hear the soft bellowing of a hippo. But if you’re really lucky, you may even see an elephant or two crossing the river. 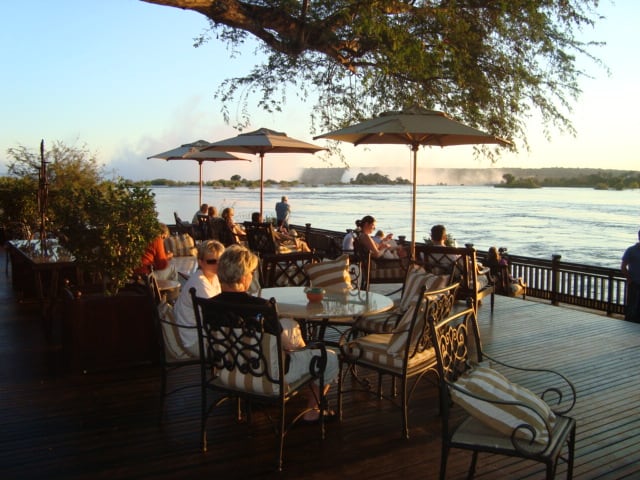 Head over around 3 to get your fill of cake, as the sun sets early in Zambia, between 5.30pm and 7pm.

White water rafting is a thrilling experience and there’s nowhere better than the Zambezi. Whilst you can raft all year round, the best time is the low water season (July – January) when the river at its most ferocious. 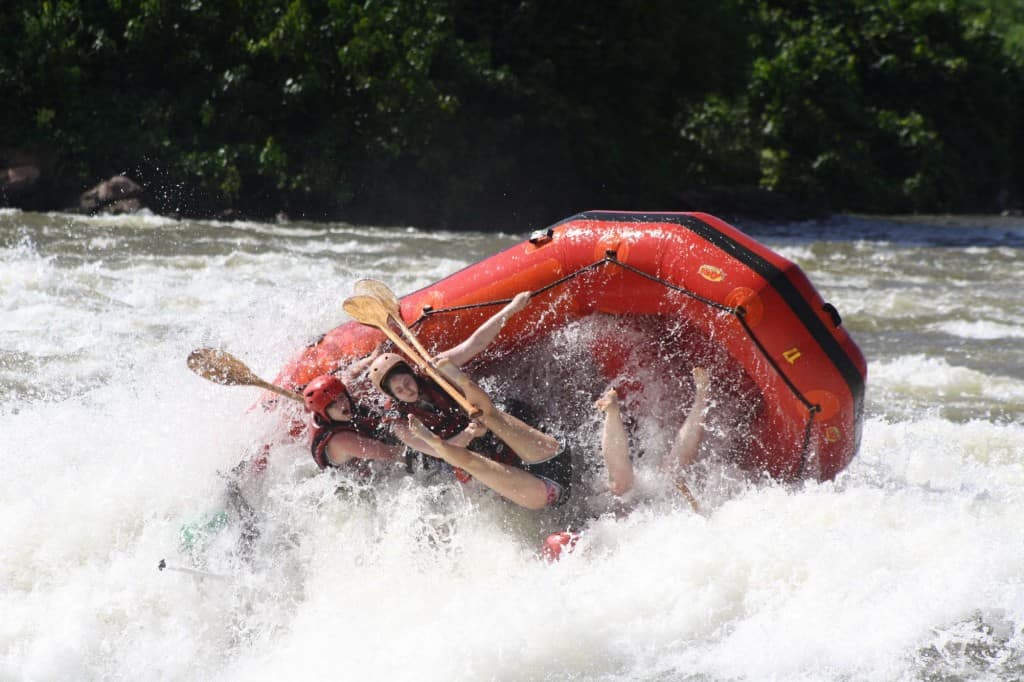 Starting in the Boiling Pot near the base of the victoria Falls, you’ll make your way down river, negotiating 25 rapids with names like Stairway to Heaven, Midnight Diner and Oblivion. The river also has a number of Grade 5 rapids, the highest possible for commercial rafting. Trips can be taken over one day or several days, allowing you to camp on the riverbank. Whatever happens, it will be an adventure (those are my legs on the far right)!

4. Seeing Victoria Falls from the Air

From the ground they are stunning, but from the air, Victoria Falls will take your breath away. 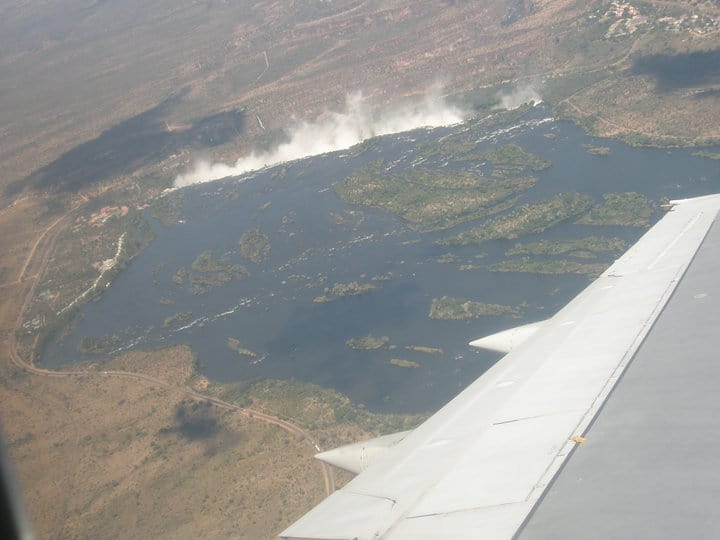 If you’re flying into Livingstone, you’ll no doubt get a good look at the Falls, and every pilot I’ve flown with has pointed them out. 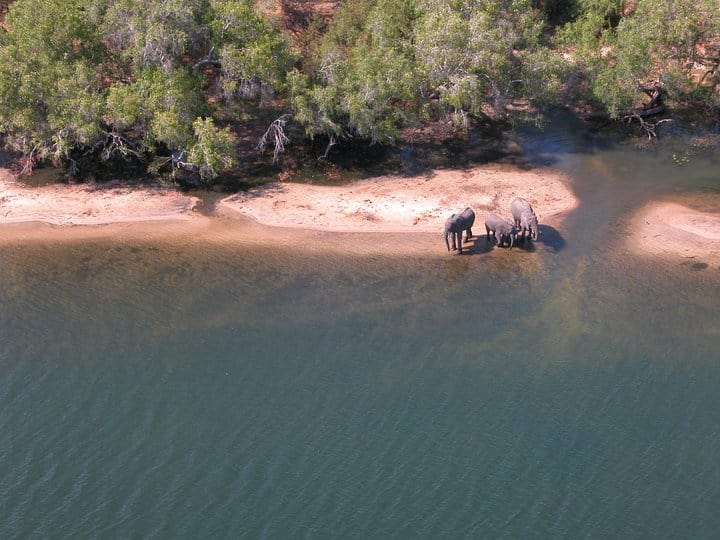 Helicopter rides can also be arranged, or if you like the wind in your hair and are feeling extra brave, microlighting is sure to give you one of the most exhilarating hours of your life. Check out this view. 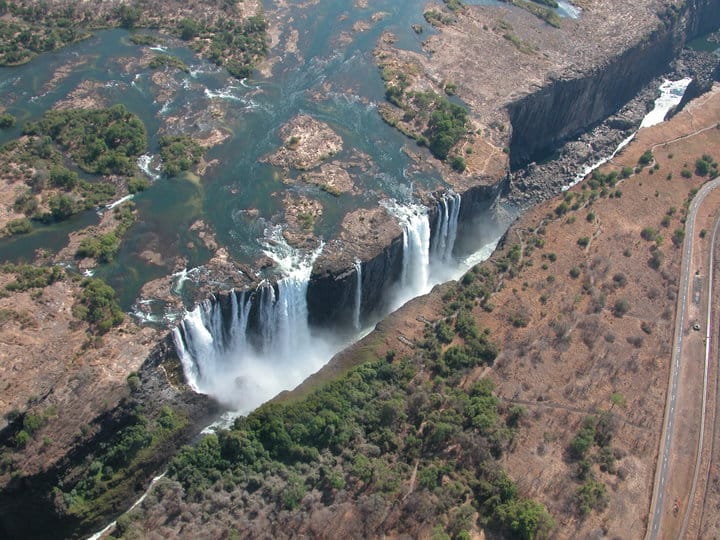 Taking a sunset cruise down the Zambezi is a great way to see the river and the animals that live in and near it. 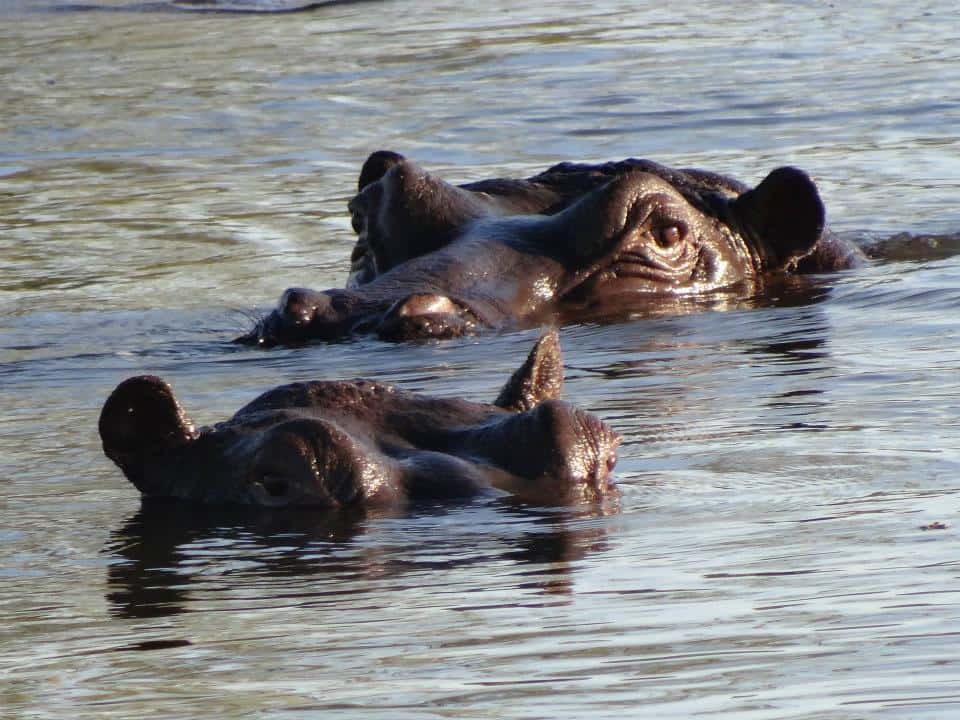 A number of operators offer boat trips with food and drink included. As you sail up river, you’re likely to see animals such as crocs, monitor lizards and plenty of birds, including Zambia’s national bird and one of my favourites, the fish eagle. Hippos watch you warily as you pass and you’re likely to see elephants or giraffes drinking at the water’s edge. 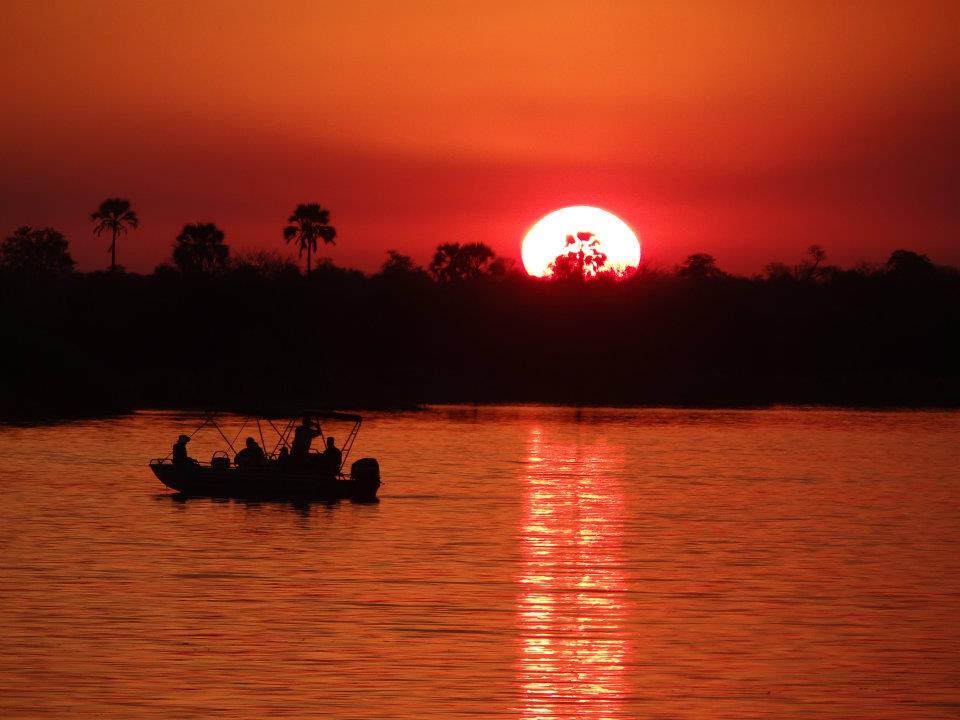 A boat on the river is also the perfect place to watch the sunset and feel totally at peace.

I’ve visited over 20 national parks and reserves in Africa, and they’re all wonderful in their own way. But South Luangwa in eastern Zambia is my favourite. It has all the wildlife that you could possibly want to see: lions, leopards, zebra, elephants, giraffe… the whole gang are there. And it’s much quieter than the Serengeti, Masai Mara or Kruger. 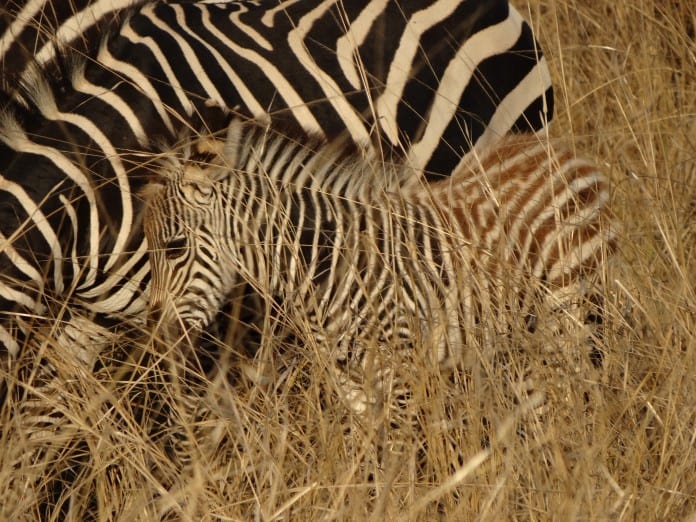 It’s also the place where I spent one of the best days of my life. The rest of my friends had gone off on an early morning game drive, whilst I decided to sit and watch the sunrise by the river, catching up on my writing. After being mugged by some monkeys, who stole my breakfast, I turned around to see a matriach elephant leading her family across the open plain. 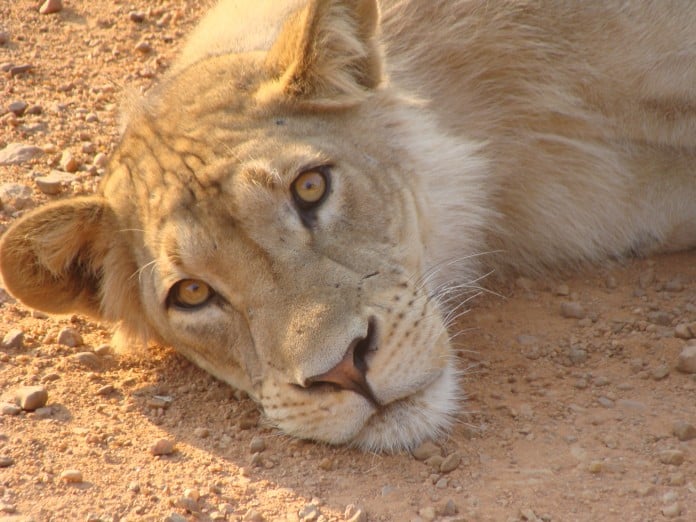 Later that day, while sunbathing by the pool, 3 elephants came trundling through the camp, causing everyone to scatter. A little bit scary, but mostly exciting. It was the closest I’ve ever been to an elephant whilst not in a safari truck. 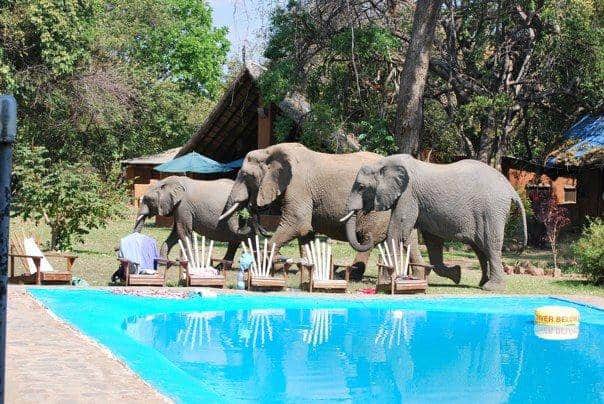 Taking the train is undoubtedly one of the best ways to travel and the 2-day Tazara train, which runs from Kapiri Mposhi in Zambia to Dar es Salaam in Tanzania and vice versa, is a wonderful way to see the country. 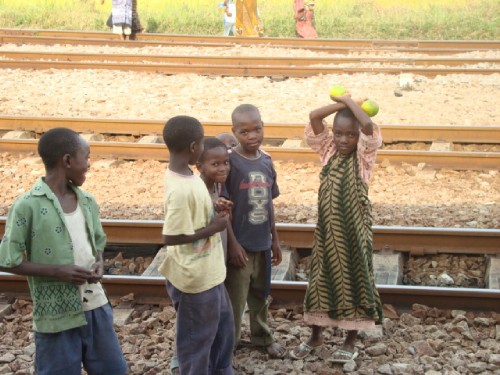 Whole villages come out to see the trains, waving as you pass. When we stopped, I enjoyed hopping off the train to buy bananas and water, play games with the kids and practice my Swahili chatting with the locals. They would giggle as I mispronounced the words, but they loved that I tried. It’s not the most luxurious way to travel, and my train arrived 24 hours late (African time – it grows on you), so don’t expect comfort, but do expect an unforgettable adventure.

Cliff Sitwala, a local Livingstone social entrepreneur, had a vision for the compound where he lived. His idea was simple. He would buy some bikes and offer cycling tours to tourists in the area, and with the profits, he would build a school. 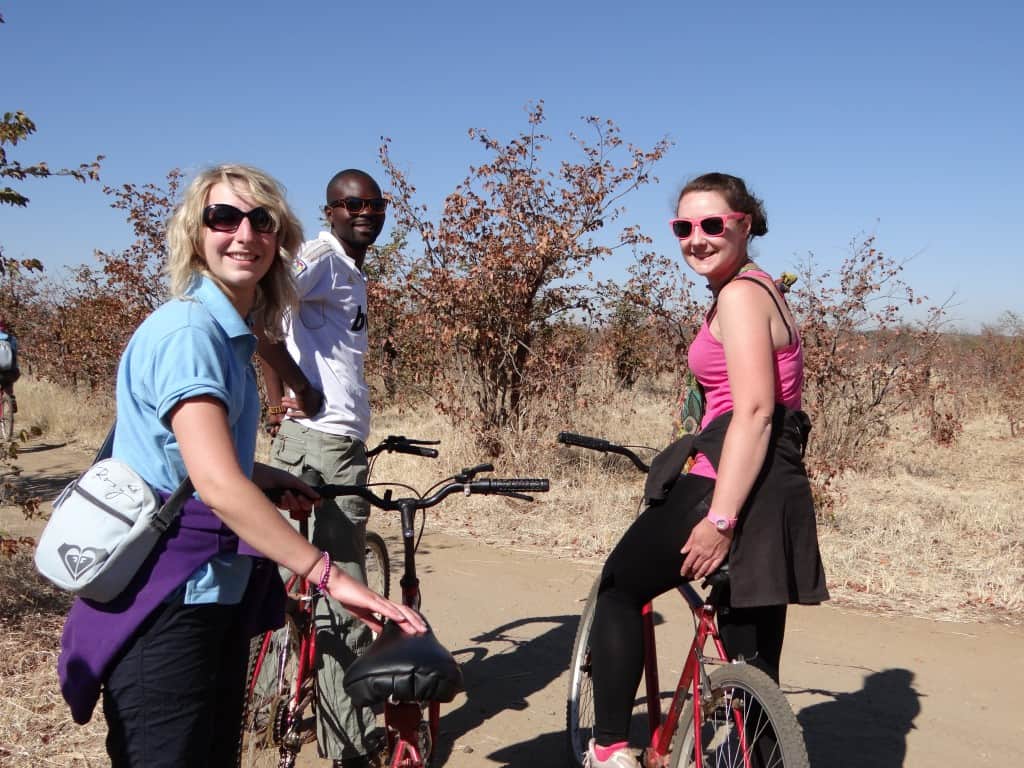 The tours take you through areas that you might not otherwise visit, including a number of villages, local markets, Mosi-oa-Tunya National Park and to the Local Cowboy Preschool itself. It’s a great way to see the real Zambia. 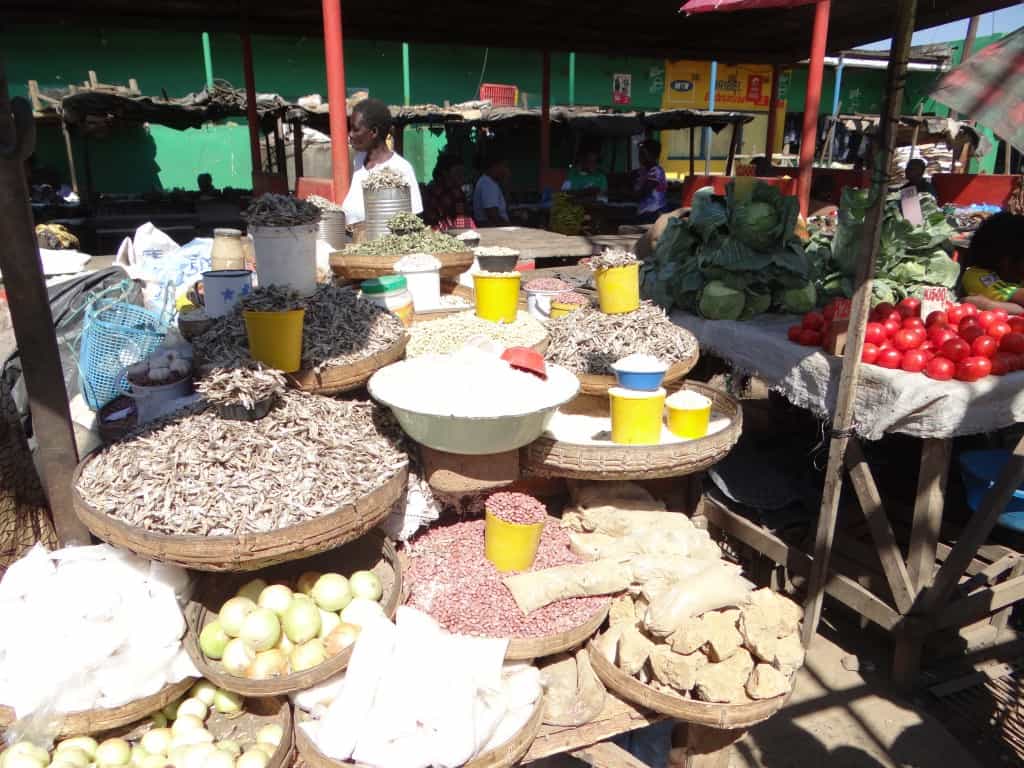 9. Staying on a Houseboat on Lake Kariba

Lake Kariba is the world’s largest artificial lake and a popular stop for overland groups who spend a night or two upon a houseboat. The lake is unbelievably tranquil, stretching as far as the eye can see, a perfect place to relax and unwind. 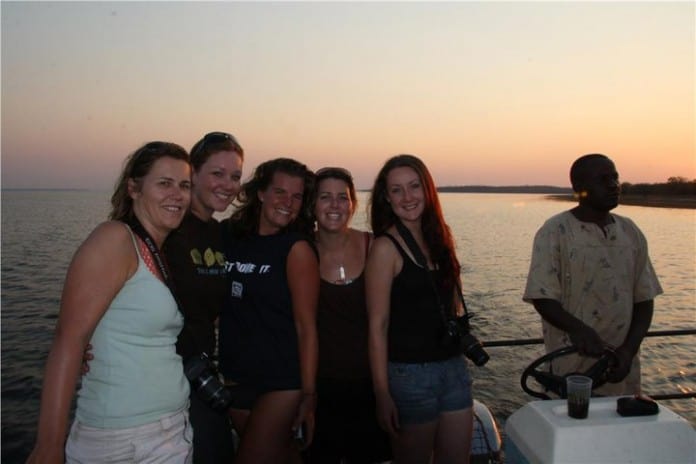 It’s a great spot for fishing too, with fish like Tiger Fish and Bream in abundance. At night, the lake twinkles with a thousand lights, from boats fishing for kapenta, which will be dried and sold at the markets.

Last, but crtainly not least – the people. Zambians are some of the friendliest people you could ever meet. As you drive through the both city and countryside, people wave and smile and are always willing to help you out or have a chat. 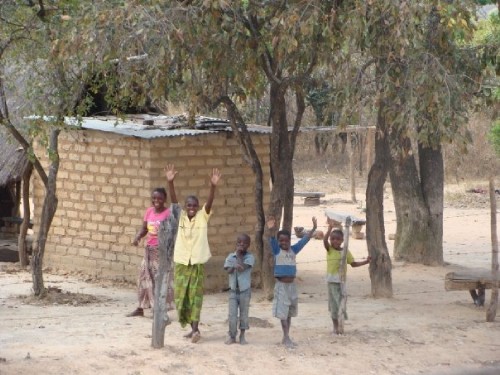 Zambia is a beautiful country with so much to offer, I can’t wait to return to my second home.

Have you been to Zambia? Would you go?

Helen Davies is a an adventurer, part-time traveller and full-time Africa lover. Not one to do things by halves, Helen can usually be found on or planning an epic trip. Having spent a year in Africa, she’s keen to encourage others to explore her favourite continent. She writes about her travels (in Africa and elsewhere), and about the people she meets along the way on her blog Helen in Wonderlust.

Victoria Falls and the Lunar Rainbow

Great river cruises of the world