I arrived at the Princess D’An Nam after a few weeks of solo travel on a sojourn through Southeast Asia. I was well within the throes of gastroenteritis, having picked it up at a roadside food stall somewhere between Nha Trang and Dalat on a motorcycle tour of the central highlands of Vietnam. Anyone who has suffered the dreaded gastro will know I needed to get into a relative state of comfort, and quickly!

It did take a bit of getting to, as the luxury hideaway boutique hotel really is hidden. I traveled from nearby Mui Ne, and my poor taxi driver got completely lost, stopping for directions when there was a rare figure on the side of the road in the desert-like landscape (my Vietnamese is not great, but the facial expression for ‘good luck with that’ is universal) eventually driving straight past it, requiring two kilometers worth of mime as a medium to explain ‘I think it was back there’. Apparently, hiding a five acre oasis of botanical gardens, 48 villas, four swimming pools, two restaurants, and lavish spa complex on Vietnam’s coastline in one of the country’s most arid provinces is possible. Go figure. 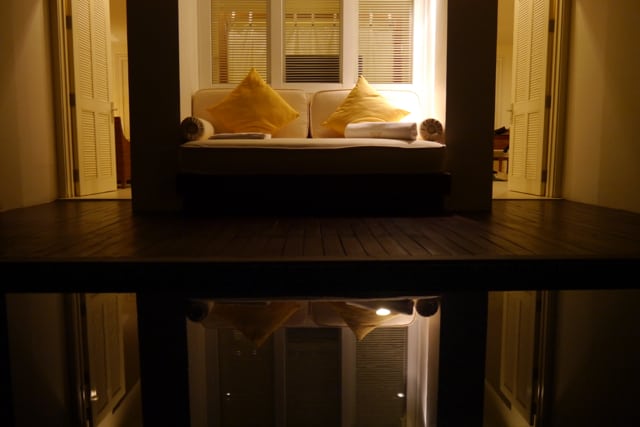 (For the record – resort guests would normally arrange direct transfers with the Princess from Saigon, and this is certainly recommended. However assistance with public buses is readily available, and my onwards travel from the Princess was much easier because of it!)

Sometimes, though, things have to be done the difficult way to truly experience the relief and tranquillity (I would almost call it ‘liberation’) I felt when I arrived. I was seated in the expansive entrance reception with a cool, scented face-cloth and a welcome drink. I was greeted by name by professional staff, my luggage was whisked away, and I received an apology for the taxi being lost, even though it was the hotel’s fault. After being shown a map and given a geographical explanation of the resort’s features, I was escorted to my room, a Princess Villa.

I felt unworthy to even be inside it, with my grubby sandals, scruffy transit clothes and battered camera bag. One hundred square meters of soft cream and wood décor, a four poster king-sized soft bed (did I mention it was soft? The only one I found in Vietnam!), a private plunge pool, and huge outdoor bathroom, complete with sunken bath. The fruit basket on arrival was a lovely touch and provided a great opportunity to sample the alien-looking local fruit. 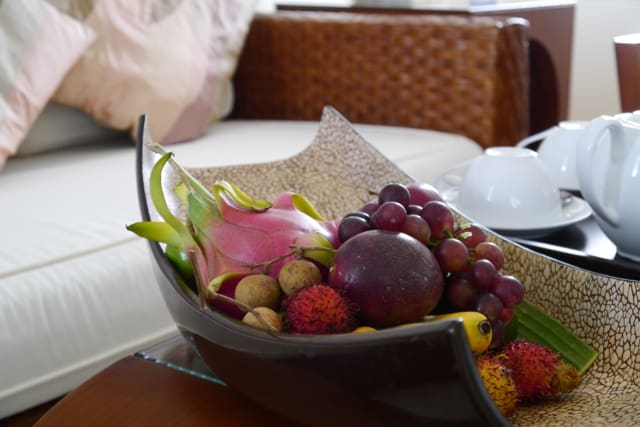 Thankfully, the room set the tone for the resort itself, which really is something else.

The resort is situated on the coast of an undeveloped province which was once of the poorest in Vietnam, thanks to its microclimate of minimal rainfall and desert-like landscape. More recently, however, the district has developed agriculturally; partly, says General Manager Jean-Philippe Beghin, due to the fruit of the Hylocereus cactus, more commonly known as dragon fruit. This delicious local fruit features on all of resort’s menus (including the spa menu!).

The location makes for a beach resort unlike any other in Southeast Asia – it is free from the more unsightly aspects of other beaches in the region, and you will not be harassed by street sellers or see pollution within the resort grounds. Its seclusion, and the limited industry within the province, also means there are no loud bars and clubs, typical tourist traps, or a backpacking community — although all of that can be found in an easily arranged day trip to Pan Thiet or Mui Ne.

The grounds of the resort are simply beautiful, a veritable botanical garden of close to five hundred species – the short walk from room to restaurant is particularly lovely due to various trees, flowers and plants at every level of the garden. A prominent landscape architect designed the area years before the first foundations were laid, which is clear in how established the gardens feel, despite the relative newness of the resort. 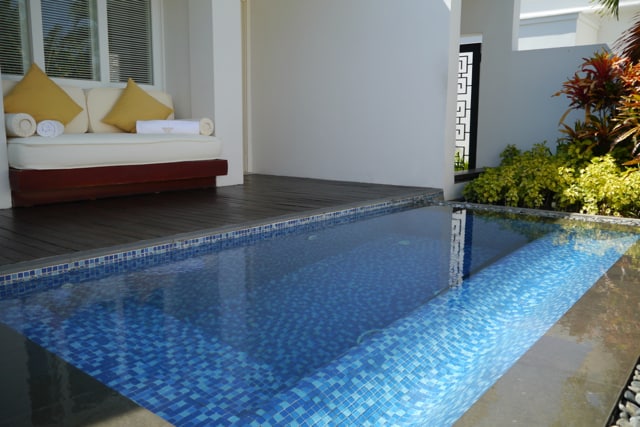 Although feeding a captive market, the a la carte and degustation restaurants are very reasonably priced considering many ingredients are, by necessity, brought in from Saigon daily, and the Western dishes offer many cuts of meat sourced internationally. Ingredients grown within the district was also procured daily from local farms or suppliers and the resort is proud of supporting local development in this way. The service in the restaurant is impeccable and the quality, portion-size and presentation of the dishes were great.

The Princess D’An Nam’s spa is a multi-storied complex built with the same concerted attention to detail and high-quality materials as the rest of the resort. There are separate massage rooms for the many varieties of traditional massage technique offered, and other rooms for specific treatments. The dressing room was also very spacious and opulent, complete with showers, a sauna and steam room as well as plenty of robes and towels available.

All treatments begin with a lovely cumquat footbath and scrub. The spa offers twelve different massage options. These range from the more traditional Thai, Vietnamese, Ayurvedic, Korean and deep tissue techniques to modern adaptations, including the Princess Signature (a rolling technique made to feel like the waves of the ocean) and a Mekong inspired massage.

I have had massages throughout Southeast Asia, however the Princess Spa wins hands down, across the board, given the evident training of the staff which showed a skilled implementation of the separate techniques and their English language skills. Naturally, the pricing schedule at a luxury boutique resort reflects this. However, I would say it is money well spent (and still cheaper than the equivalent treatment would be at home!).

Similarly, the facial menu is extensive, offering hour-long facial treatments which would suit all customers’ age and skin types. The spa also offers a very interesting specialty, the ‘Secret of Indochina Facial’. This treatment uses four jade rollers to massage the face in a method developed by Northern Vietnamese women and is said to have anti-aging properties. The rollers are kept iced throughout the treatment and the effect is incredibly relaxing and cooling.

The wraps and scrubs available were equally luxurious. I tried the coffee body polish, which left my skin incredibly smooth, followed by a dragonfruit wrap, homemade from locally sourced produce. 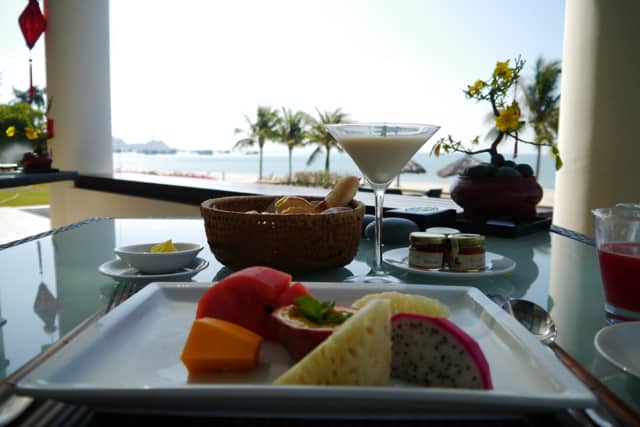 A salon service is also available, and although the manicure and pedicure was, like the massage, the most professional service I received in Southeast Asia, I was a little disappointed to see there were no beauty maintenance options, such as waxing, plucking or threading.

My focus with the Princess, given my state of health, was on recovery, relaxation and food. There are definitely worthwhile excursions by arrangement, like a trip to the French lighthouse, or visiting Phan Thiet and Mui Ne, and plenty of water activities provided by the hotel.

I did manage to fit in some yoga and tai chi with the talented Mr Hong, who, as well as managing staff, provides classes on request for the guests. If yoga, pilates or tai chi is your thing, the pristine grounds and beautiful beach scenery provided a perfect backdrop for some reflective practice.

All in all, the Princess offers a service which, with other luxury brands, would come at a much higher price to achieve the same level of exclusivity. The weather also factors into this as the low season will have much less rainfall and higher average temperatures than in other districts, and great savings can be had during this period.

As a realistically priced luxury boutique resort, I’d recommend this to anyone considering a particularly luxurious break – like for a honeymoon, anniversary or birthday. If you are traveling like I was, within the region as a part of a longer journey, a stay at the Princess D’An Nam was the perfect way to recharge my batteries before continuing on, but it could equally be a highlight of a longer trip before returning home via Saigon.

Echo Haronga is a criminal lawyer from New Zealand who is ticking off her travel bucket-list, one extended period of leave at a time. Trying to coin the (appropriated) idiom ‘travel begins at home,’ she has travelled extensively in New Zealand and has more recently set her sights on the world. Now somewhat experienced at getting lost in South East Asia, she is looking forward to exploring Mongolia and South America in the coming year.

*Note: This stay was sponsored by the hotel, but all opinions are the author’s own.

My top 6 spa experiences around the world