A short trip north of Rome is the small town of Orvieto. From the moment you see it perched up on its volcanic plug, you can tell it’s a special place. With its 360 degree views of the surrounding countryside and vineyards, it’s no wonder a number of popes have called Orvieto home over the years. We spent a bit of time here this past winter and would like to share some of our favourite places. 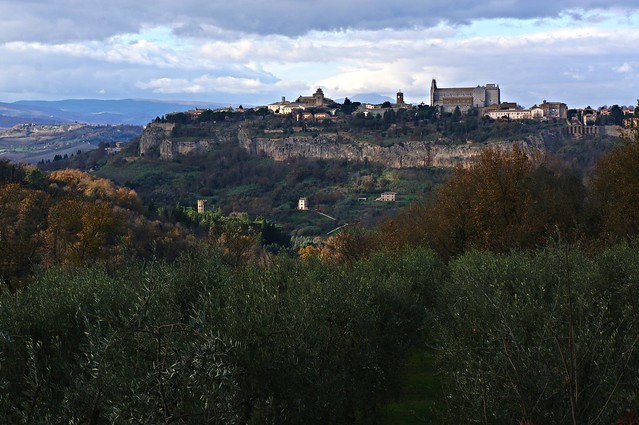 Orvieto with the Duomo dominating its skyline.

We found this little restaurant up via del Magoni and decided to check it out. As it turned out we were quite lucky to get in without a reservation. The front room was bright and filled with locals – always a good sign. We were escorted through the restaurant and out the back door to a courtyard and a separate, closed in dining area with one free table. The food was simple as is the case with most Italian restaurants. Letting the ingredients speak for themselves.

We enjoyed a starter of guanciale with vinegar. Guanciale, aka pork jowl, looks like a very fatty bacon but the fat has amazing flavor. In this case it was cooked but not crispy and then splattered with balsamic vinegar, super simple and so good. The second course arrived, a typical Umbrian stewed salt cod with vegetables and raisins for me and a tagliatelle al ragú for Tim. We skipped the third course and dessert and opted for a quick espresso before heading out for a long walk around town. We liked La Pergola so much, we returned a second time. 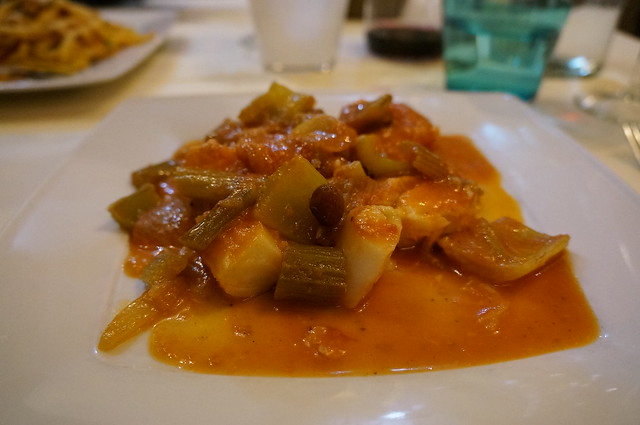 Right next door to La Pergola is a wonderful turned olive wood studio and shop. Run by the artist, Umberto Fantina himself, you can find pretty much anything you would want made out of olive wood. From pasta and pizza cutters to bowls and yoyos, all made with beautifully grained olive wood. It’s a great place to find nice souvenirs like small cutting boards and salad servers that are hand made and affordable.

The Duomo in Orvieto was built during the 14th century under the orders of Pope Urban IV, to house the Corporal of Bolsena, a miracle that is said to have happened in the 1200s. We spent a few hours here over three separate visits, appreciating all the amazing 14th and 15th century art. 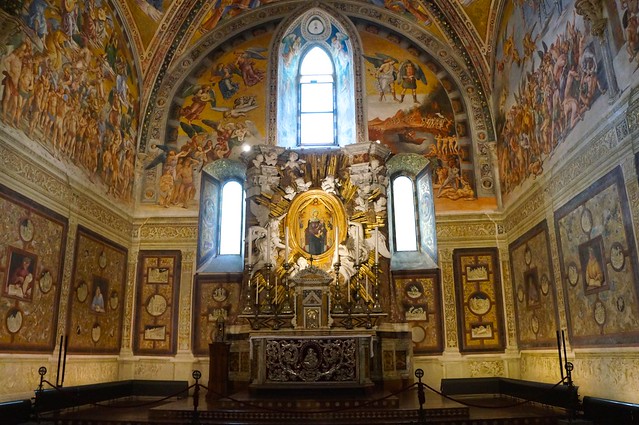 The most impressive part of the Duomo is the Chapel of the Madonna di San Brizio. In the summer, visits to the chapel are limited to 15 minutes, barely enough time to get your bearings. During the winter months, when crowds are slim, this rule isn’t in effect and you can take your time, finding the different sections on your map and reading about the artwork or get yourself an audio guide and follow along. The Duomo is a work of art in itself and dominates the skyline of this small Umbrian town, its facade glimmering in the sunlight. 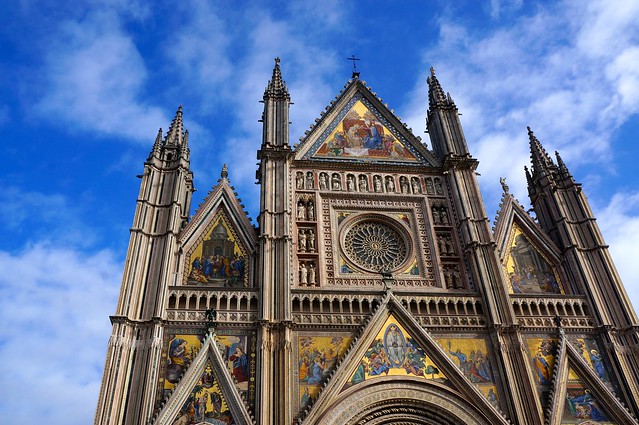 It’s interesting to learn how cultures differ from one another when it comes to burying their dead. When we were in Orvieto we had the opportunity to visit this Etruscan necropolis. As you enter, there is a small museum describing the site, its history and the excavations that took place here. A moss covered path leads to the necropolis, you can walk among the tombs and enter some of the empty tombs if you wish. 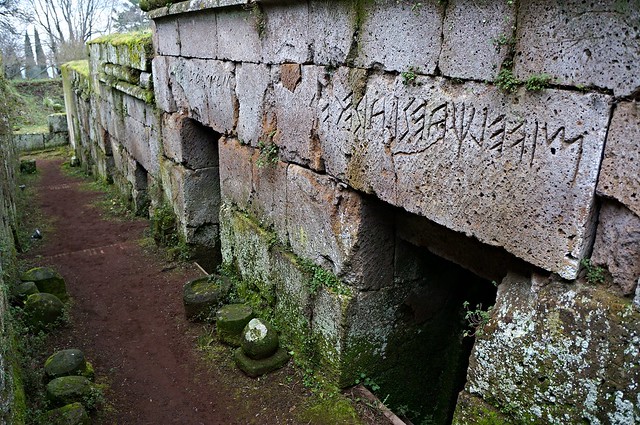 All tombs are similar in size and with nothing to differentiate one from another, we are led to believe that citizens of differing rank and status were buried side by side. Visit the Museo Civico in town to see some of the artifacts excavated at this site. 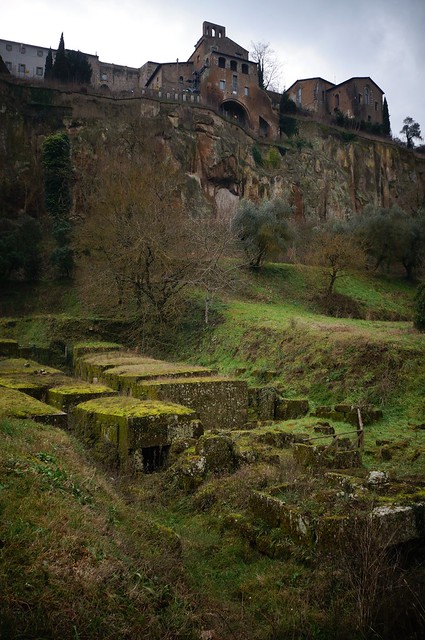 For a few euros you can do a self guided tour of the theatre, situated on Corso Cavour. The facade is elegant with its two-tiered portico, and inside you will find an elaborate decor and beautiful frescoes. The theatre dates back to the Middle Ages and showcases frescoes by Cesare Fracassini. At the front of the theatre is the historical painted curtain showing Belisarius freeing the town of Orvieto from the siege of the Goths, also by Fracassini. 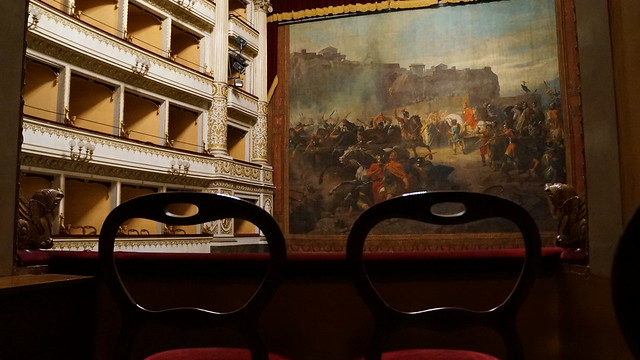 Another great way to see the theatre is to attend one of the events held here. They range from buffet receptions in the foyer to plays to gigs during the Umbria Jazz Winter Festival. 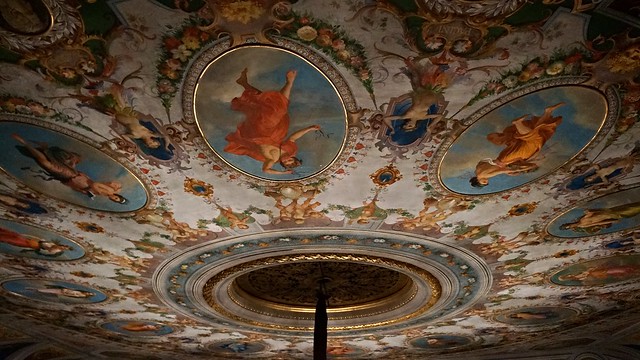 Part of the ceiling in the Theatre 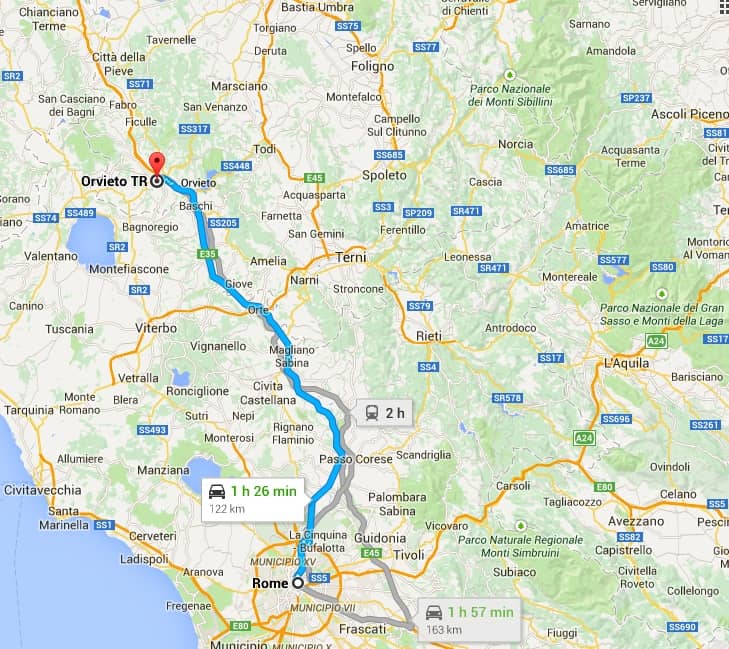 Have you experienced any great Italian hill towns?

Things to do in Orvieto Italy

16 thoughts on “Orvieto, not just another hill town”