People travel to Koh Samui in Thailand mainly to enjoy the white sandy beaches and crystal blue waters. But if you’re recovering from a sunburn or just want a break from getting sand in all the crevices of your body, here are three things you’ll be surprised to discover on this little island paradise:

Swim in a waterfall 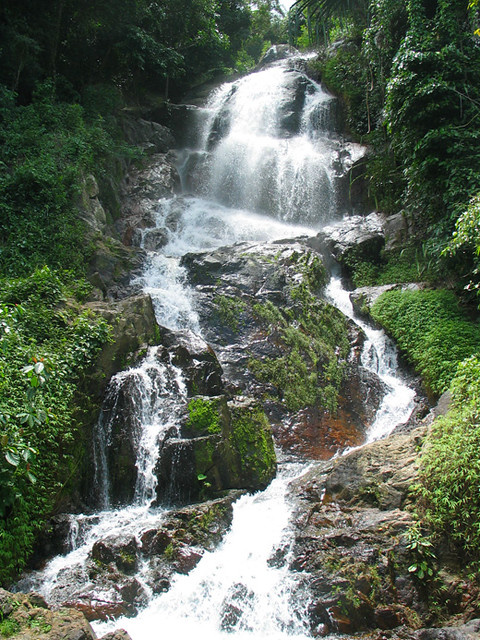 Head inland and you’ll find some lovely tropical forests and a different body of water to swim in. The Namuang waterfalls in the southern end of Samui off main ring road Route 4169 are pretty easy to access, even if you aren’t kitted out to do some serious hiking. The first waterfall is just a 5 minute walk from the carpark, and the second and taller waterfall takes about half an hour along a forested path.

The waterfalls, known for their purplish rocks, aren’t particularly high or grand – but they’re still quite picturesque and a nice respite in the tropical heat. Make sure you go at the right time, though – the waterfalls are barely a trickle during the dry season and are best seen during/after monsoon season, usually from September to March. Most people stick to Chang or Singha beer when in Thailand, but for a boozy drink with a difference, consider heading to the Koh Samui Rum Distillery for a tipple or two. This distillery has developed some rather unusual rum flavours – coconut in deference to the island’s main export; pineapple; lemon; and even orange. Pair with their homemade sugarcane syrup for a yummy drink!

This French-style distillery was set up back in 2003, but has only expanded quite recently and now serves up a mix of Thai and French food for dinner, so make an evening of it by having a meal and pairing it with their rum cocktails. The distillery is located in Ban Thale, the southern region of Samui.

Take in the view from up high Instead of enjoying your usual sunset by the beach, head up into the hills to one of the highest peaks on Koh Samui over 600m up and take in the view over tropical plantations while you have dinner at the Peak Eye View Restaurant. On a good clear day you can see the other nearby islands as well. The path up into the mountains is located off the ring road between Nathon and Lamai – look out for the signpost.

This video gives you an idea of what to expect at this restaurant:

Even on a beach-focused island like Koh Samui, it’s still possible to get off the beaten path!