I first visited Paxos on a day-trip from Corfu when I was just 16. I never imagined that, years later, I would return to the island on three separate occasions to spend a total amount of six weeks exploring its beautiful landscapes and the lives of the people who inhabit it.

Located just 11 kilometres from the southernmost tip of Corfu, Greece, and accessible via catamaran from Corfu Town, the tiny (it’s just eight kilometres long and three kilometres wide) Ionian island of Paxos has a population of just 2300 permanent residents, of which my ex-boyfriend’s parents were two.

Paxos may not be somewhere to come for its architecture (there are no historically recognised monuments here), or its nightlife, and it’s distinctly lacking in sandy beaches (there is one man-made one at Moggonissi; the rest are shingle), but for me its appeal far surpasses the need for any of those.

Here are a few of my favourite spots on the island.

When I hear people talk of their ‘happy place’ – somewhere they can feel relaxed, invigorated, and inspired all at the same time – I think of Tripitos. I love sitting up on the jagged rocks feeling the warm sun hugging my shoulders and the cool breeze whispering through my hair.

Tripitos is not somewhere you would stumble upon by accident, but its inaccessibility is part of its appeal. Boats rarely venture around this side of the island due to its rocky shores and strong currents, and it’s a rather difficult scramble over rocks and between brambles to reach it from the opposite direction on foot.

But don’t let that deter you; when you catch sight of this view you’ll be glad you made it here. 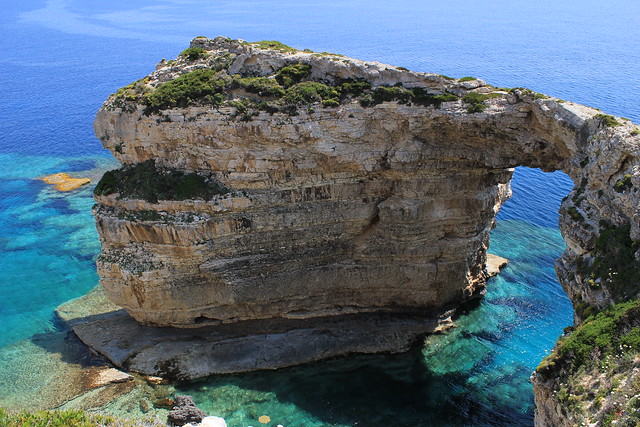 Accessed via a donkey path that is walled on either side, the Limestone Pavements are a short walk from Makratika, above the capital town of Gaios. As you follow an old shooter’s track on to the cliff tops, you are surrounded by the aromas of mint and oregano, from the abundance of plants growing along there.

When you reach the Limestone Pavements you’ll be rewarded with some spectacular views down on to a secluded cove known as Avlaki Creek, and of areas of terraced farmland where goat herders take their flocks to graze. 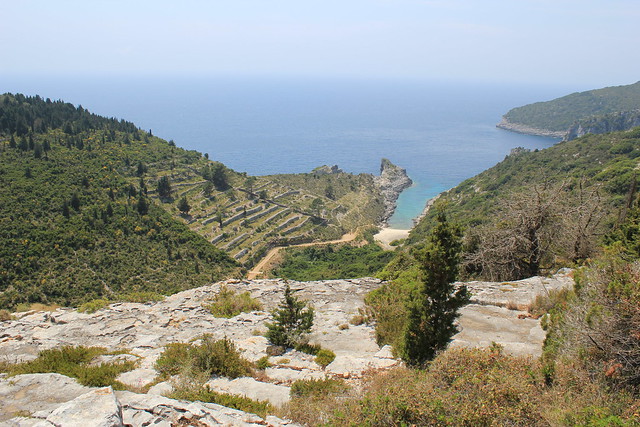 On the northeastern tip of the island, close to the town of Lakka, this ‘beach’ is so small it can hardly be called a beach and so secluded (it can only be accessed on foot, by taking a narrow, winding downhill path through some trees) that you will almost always have it completely to yourself. 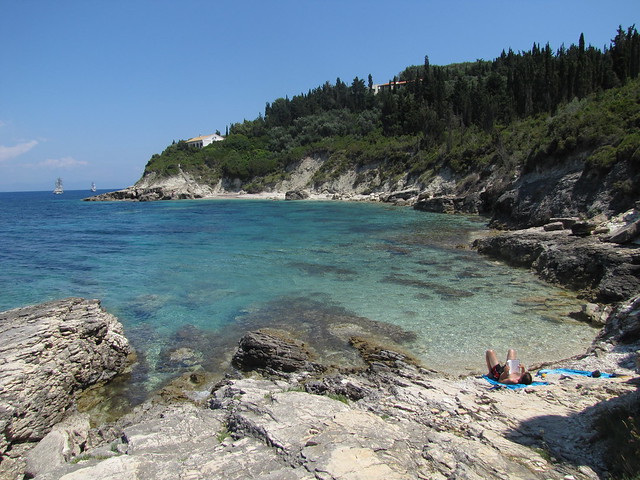 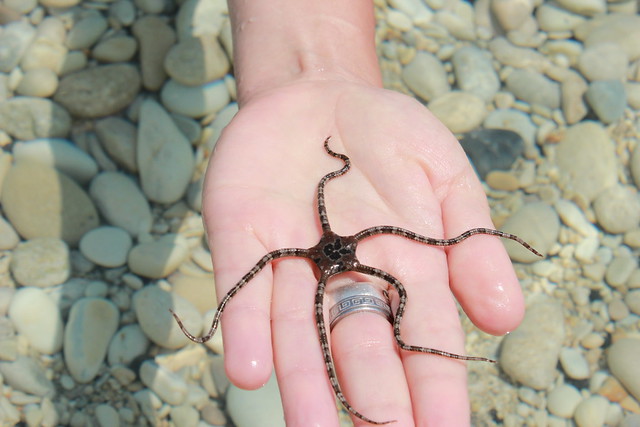 The clear, jellyfish-free waters are great for snorkelling, and if you’re lucky you may just be joined by an octopus or two (if only I’d had a GoPro back then!).  Orkos, another one of my favourite beaches, is also walkable from here.

One of the few remaining symbols of a time when the Ionian Islands were under Venetian rule, this derelict manor and its crumbling stone staircase gives a fascinating glimpse into the history it once embodied. 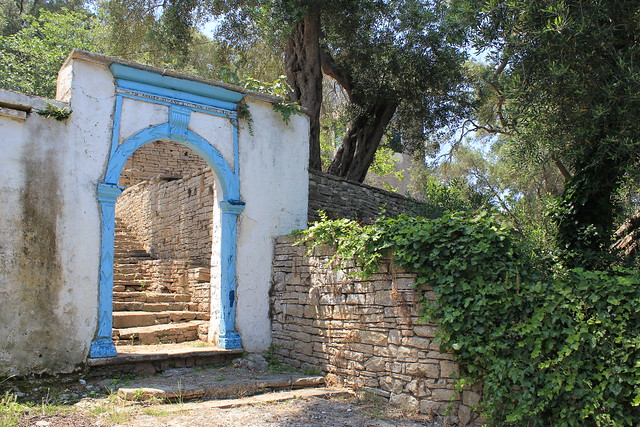 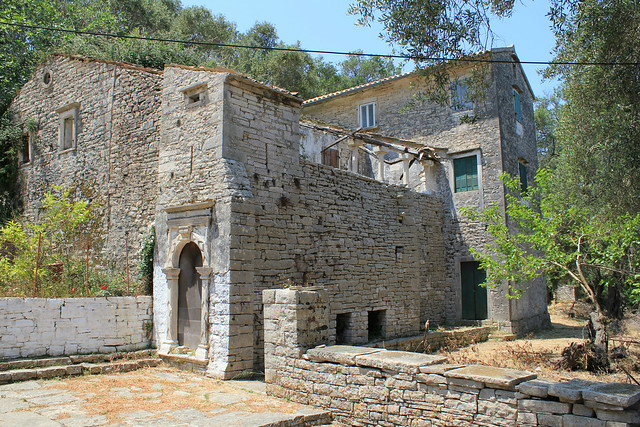 Of the three main resort towns on the island, Loggos is the smallest and least developed. Behind the derelict soap factory a narrow path meanders its way up the hill to the site of an old abandoned windmill. From here you have a fantastic view of the harbour down below. 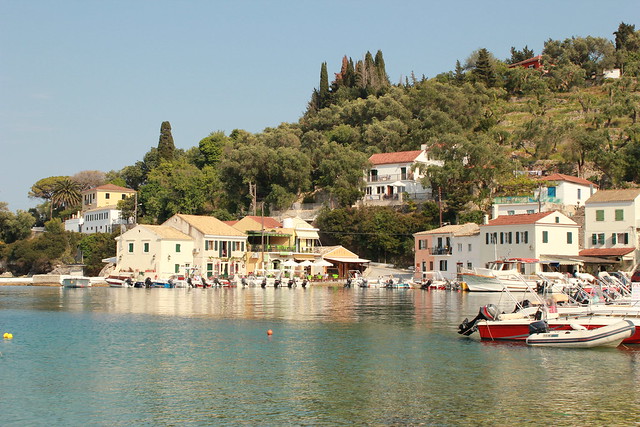 Grab a seat at one of the harbourside cafes where you can sip an ice cold frappé, munch on a Greek Salad loaded with feta, or enjoy some of the freshest seafood around. You’ll probably be joined by a resident feline (every café has one!) who’ll wait patiently beside your table, closely watching every mouthful of fish that passes your lips.

Supposedly one of the best spots on the island to watch the sun set, Kastenida is located on the more remote and rugged western side of the island.

We found a small clearing up here where there was just enough room to enjoy a mini picnic of all my Greek favourites (olives, hummus, aubergine salad, tzatziki, and pitta), and pose for some silly sunset photos, before finally perching on the wall, glass of red wine in hand, to watch that beautiful orange sphere gradually disappear behind the horizon. 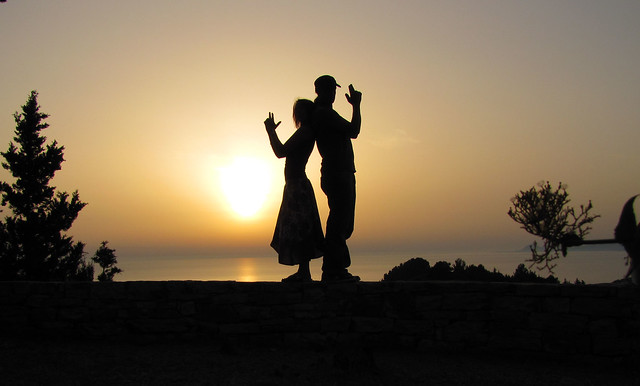 So what are you waiting for?  Come and discover Paxos whilst it still remains ‘undiscovered’.

How Best to Spend 24 Hours in Corfu Town

5 thoughts on “The little-known Greek island of Paxos”