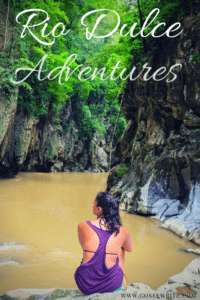 The bus ride was long and bumpy to Rio Dulce. Slightly off the normal “Gringo Trail” in Guatemala, I heard whispers of hot springs and really wanted to spend a few days exploring the area before another bumpy and treacherous bus ride towards Central Guatemala.

On the Caribbean side of Guatemala, Rio Dulce was much different from the rest of the country. I didn’t expect most of the boats in this small town to be owned by foreigners who dock their boats in the area for the fishing. While the town itself didn’t have much to offer, it appeared that most people lived across the river in small riverside houses.

The houses we passed on our boat ride to the hostel were gorgeous, expensive-looking properties in the process of being built. I was surprised given the slightly dilapidated state of the surrounding area. I also hadn’t anticipated that traveling by boat was the only mode of transportation to get anywhere from the hostel. Once we were at the hostel, we were committed to staying there until we could get enough people to warrant a boat ride.

I stepped off the boat as other backpackers swung from a rope and jumped into the murky river water. I decided I’d rather stay on the dock when they told me they’d seen baby alligators. No thanks! Without a steady Wi-Fi connection (a blessing in disguise, really) or much to do at the hostel, a group of us planned to take a day trip to the highlights of Rio Dulce: the hot springs waterfall and canyon. Rio Dulce is allegedly one of the few places in the world where a hot springs waterfall falls into cold water, I couldn’t wait to see it in real life. We needed an escape from the incessant mosquitoes at our hostel on the river, anyway! 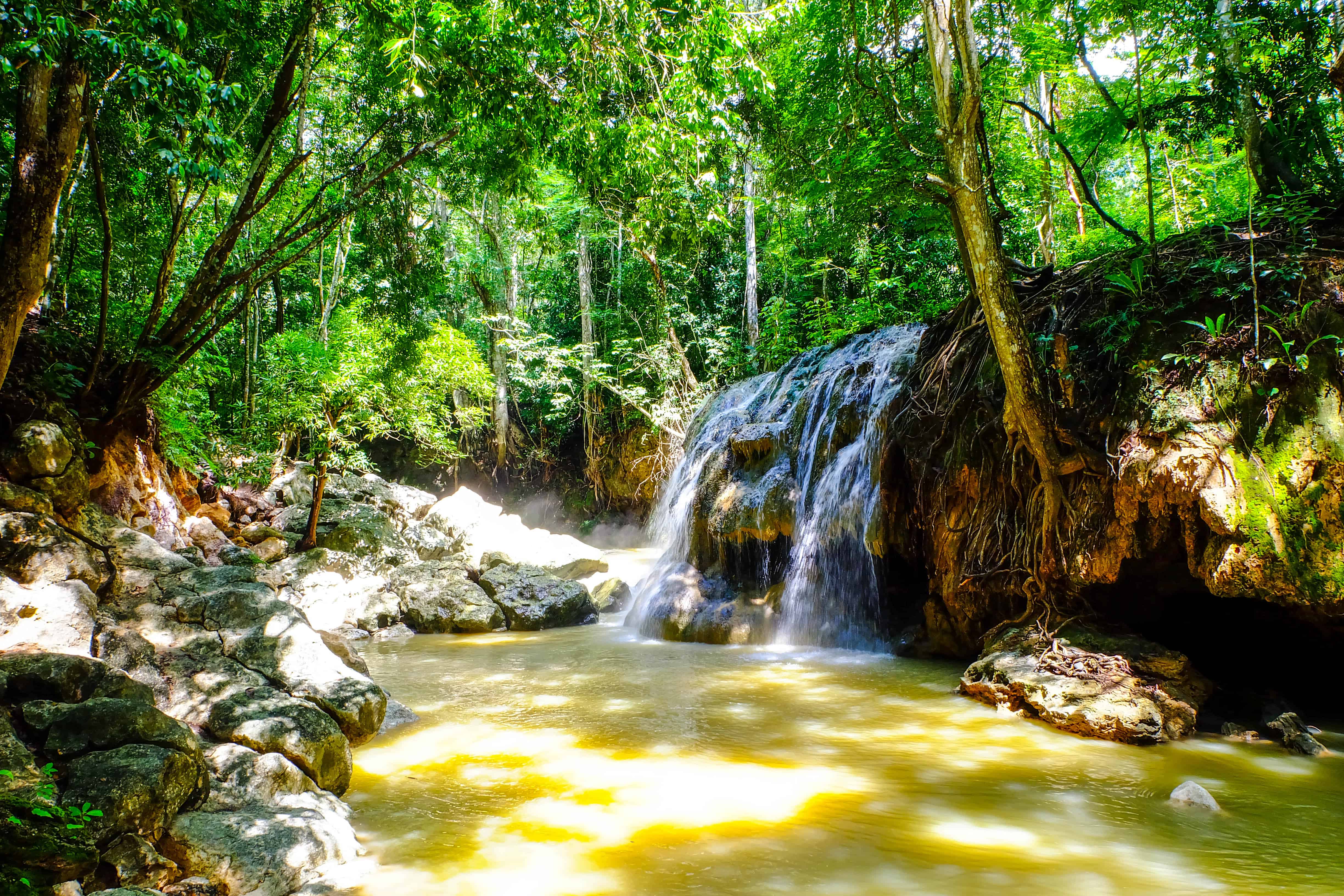 When we jumped out of the colectivo, we followed the tiny fingers pointed by little local girls trying to sell us coconuts toward the river. I didn’t really know what to expect, but we soon found ourselves jumping into the depths of a very cold river, paddling toward the waterfall. 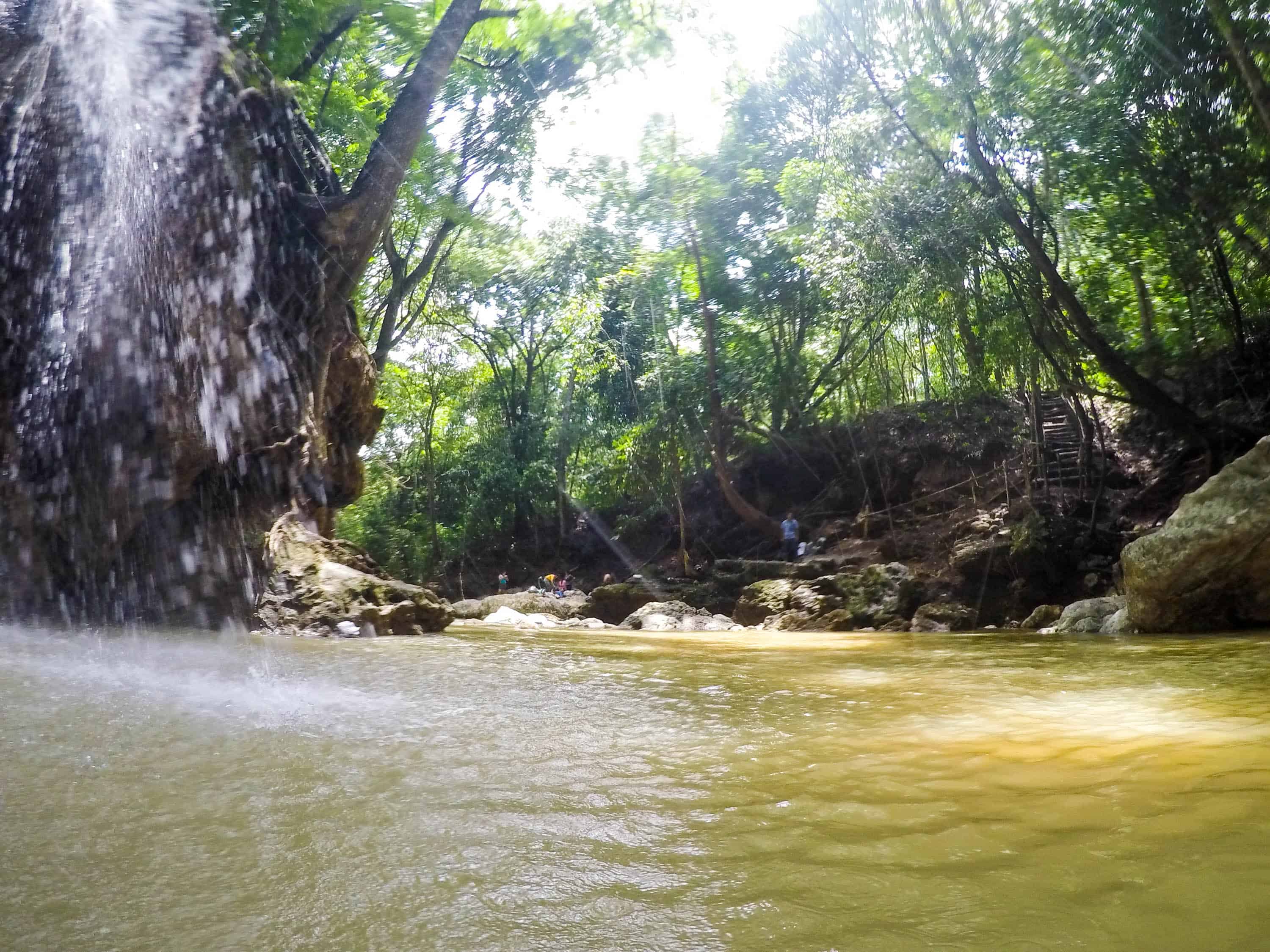 I was hesitant at first because the water was so brown; I looked like chocolate milk! The rain from earlier in the week changed the color of the water. Unfortunately we weren’t going to see clear river water today. The current was stronger than I expected it to be, as soon as I hoisted myself up on the rocks the waterfall poured over, the sweet relief of hot water greeted me. It felt so good! This water was hotter than any of the showers I’d had recently in Guatemala or Belize. 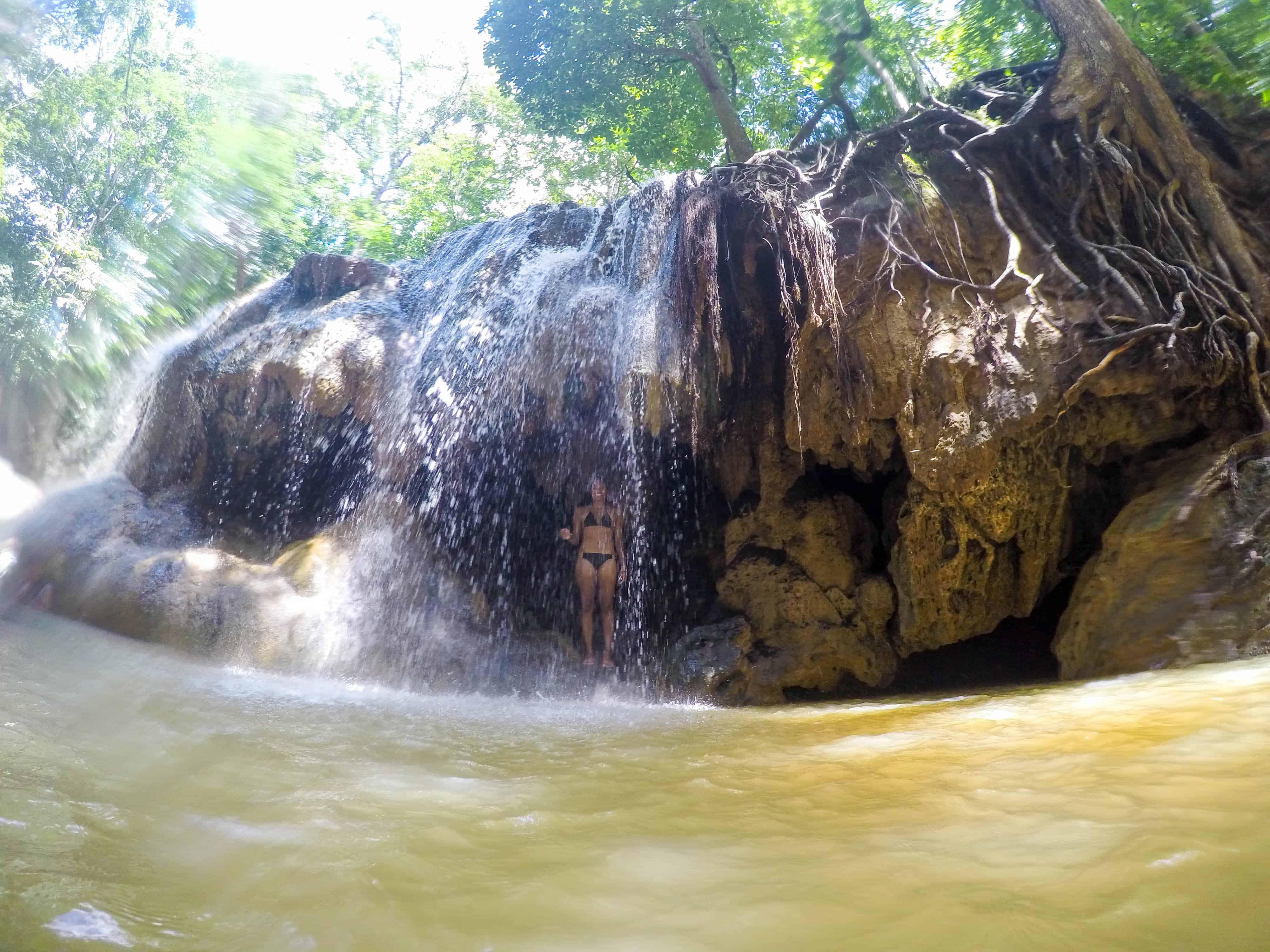 We took turns jumped into the water from a small cave that was covered in bat droppings. It wasn’t very high up, but I couldn’t muster up enough courage to jump from the top of the waterfall like I’d seen some locals do. Instead, we hiked up to the top and sat in the pools, relaxing in the steamy water. 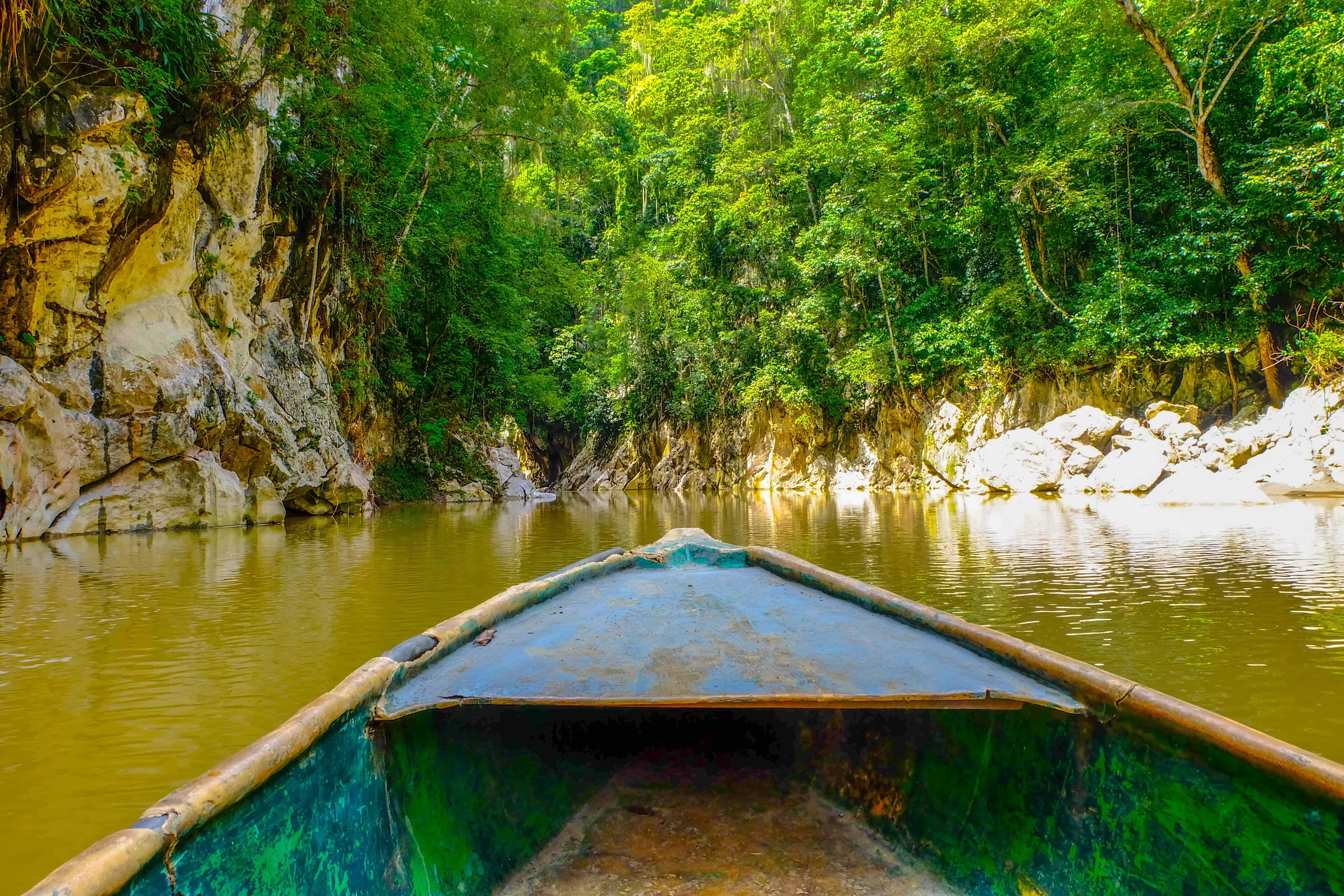 Next up on our itinerary for the day was Boqueron Canyon. Blaming the rain, our local boat operator told us normally the water was crystal clear. We didn’t really know what was going on, but he paddled us toward some rocks, instructed us to jump onto them, and paddled away. As one of the only Spanish speakers in the group, confirmed twice with him that he would be back in a half hour and wasn’t going to leave us stranded out on the rocks in the middle of the canyon; we had no way other way out! 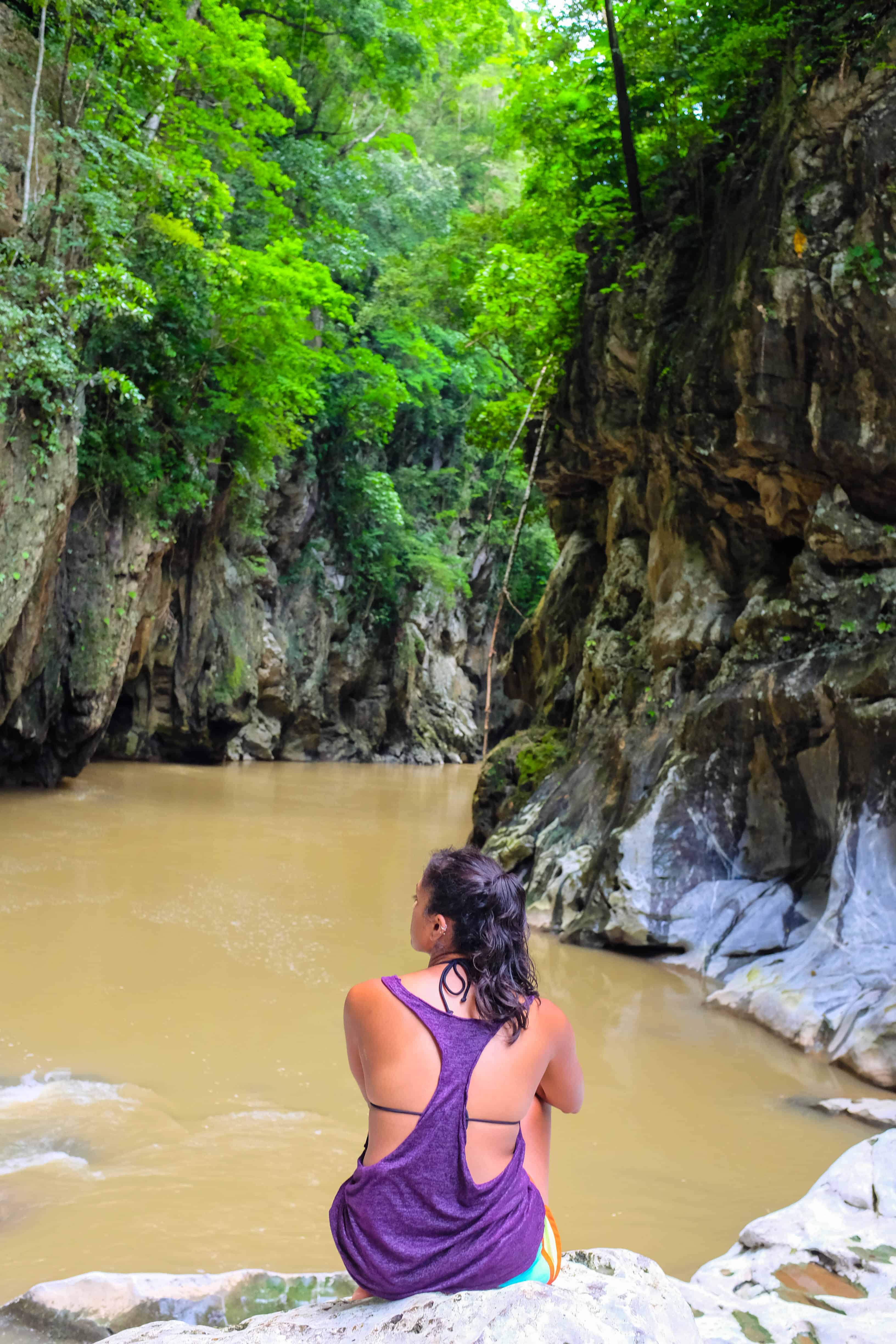 The current wasn’t very strong but the brown water didn’t look too enticing. Not knowing how deep it was, I really didn’t want to get in the water. Instead, I made myself comfortable and photographed the beautiful canyon as braver travelers jumped in and swam around, not going too far so as not to be swept further down the canyon. Even with the muddy water, the canyon was beautiful and serene. Bonus… no need to worry about the suggestions on how to tip in Guatemala.

Slightly off the main beaten path of the Gringo Trail, Rio Dulce is not a bad place to spend a few days if you’re looking for a riverside, jungle-like experience and a hot, natural shower!

Tipping in Guatemala, a full guide on who, when, and how to tip

Exploring the Gringo Trail in Guatemala