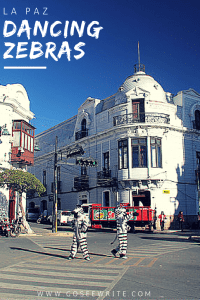 If you’ve ever visited cities like Delhi, Ho Chi Minh City or Beijing, you’ll know only too well that not only are they incredibly overwhelming places to navigate your way around, but also that – due to the sheer amount of traffic on the roads – they can be incredibly dangerous too, especially if you’re a pedestrian.

The city of La Paz in Bolivia is no exception.

Until the introduction of The World’s Longest Urban Cable Car – an initiative by president Evan Morales to connect La Paz with the neighbouring city of El Alto – the public transport system was struggling to cope with growing user demands, the traffic system was chaotic, environmental and noise pollution were at an all time high, and there was an ever-increasing demand for gasoline and diesel fuel.

What’s more, the traffic fatality rate, according to the World Health Organisation (WHO) was 12 deaths per 100,000 people, with 36% of these deaths involving pedestrians.

Yep, you read that right – Zebras.  Ok so as you may have guessed, these aren’t actually real live zebras but rather a selections of disadvantaged youths from the city who dress up in zebra outfits and control the chaotic traffic on the streets of La Paz.

They also help pedestrians (especially children) to cross the roads, and regularly hug and dance with passersby.  Oh, and pose for photographs. 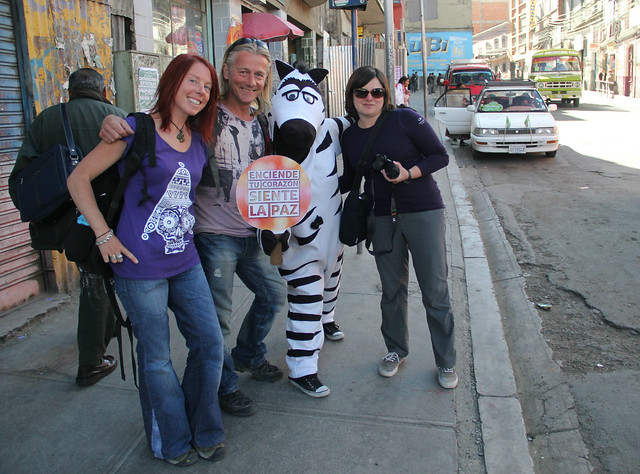 So how did the Dancing Traffic Zebras come to be?

The program, established in 2001 by the city’s government and inspired by striped ‘zebra crossings’ (paso de cebra in Spanish), aims to educate pedestrians and drivers about sharing the road.  Initially the four-footed costumes were designed to fit two people inside, but unsurprisingly these didn’t work too well, so the one-person costumes you see today were quickly introduced.

What started as a crew of about 24 zebras has now grown to over 200, and the scheme has been so successful that it’s been introduced into two other Bolivian cities – it’s administrative capital, Sucre, and Tarija, in southern Bolivia close to the Argentinian border. 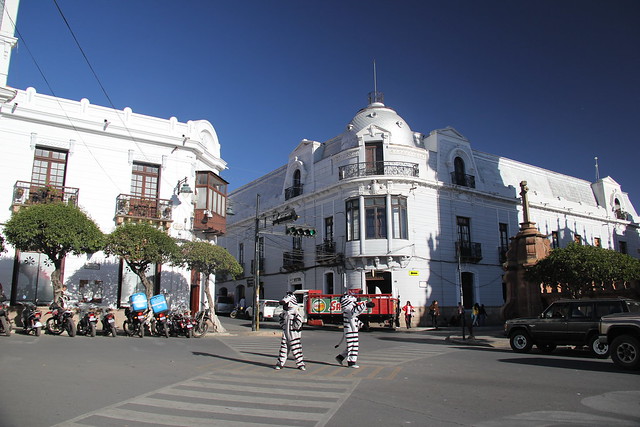 The zebras work four hours a day, five days a week, and are paid around $57 a month (the monthly full-time minimum wage is $93) for doing so.  They also get free health insurance.

How has the scheme benefited the zebras and the people of La Paz?

Not only has the scheme helped to improve the safety on La Paz’s roads and has instilled an element of enjoyment into the daily commute of its residents, but it’s also helped to get over 200 15-22 year olds off the streets and to give them a purpose in life and a reason to smile.

Having witnessed the energy and exuberance they emit as they help to control the traffic and ensure the safety of the city’s road users, it’s very clear that the zebras enjoy what they do.

The Dancing Traffic Zebras are just one small part of a larger initiative in Bolivia that places thousands of disadvantaged youths in city improvement jobs. The scope of the zebras work has also expanded to include leading educational programs in schools and public spaces on themes such as recycling, water conservation and bullying.

In short, while the dancing traffic zebras alone cannot solve La Paz’s pedestrian safety challenges, they are proof that unorthodox ideas can sometimes be the most effective ones.

The zebras are now recognised as a dynamic part of the city’s culture, so much so that they have recently been added to UNESCO’s Intangible Cultural Heritage list.

So if you’re visiting La Paz be sure to stop by and high-five a zebra.  It’s probably the only time in your life that you’ll be able to say you’ve done so 😉

Top 10 Things to Do in and Around La Paz, Bolivia

Getting Off Track in Bolivia