Florida has never been at the top of my travel bucket list. I’ll admit, when all the kids at school were heading to Disney World for March break and coming back with tans, hair braids, and oversized Mickey Mouse sweaters, I wished my parents would take me too. Instead, they took me to Mexico when I was old enough to take tequila shots with them and for that, I will be forever grateful.

Maybe the US never appealed to me because it didn’t seem exotic enough or far enough away. I was wrong (just this once). My road trip through the Florida Keys was so much more than I expected it to be. For me, the real magic of the trip came from the wildlife and the emphasis put on conservation.

Nurse sharks are pretty common around the Keys and can be found in shallow waters. Keep an eye out for them while boating and snorkelling. Don’t be scared if you come close to one in the water. They’re quite calm and won’t bother you. I hope this goes without saying but don’t pull their tails and expect them to still leave you alone. 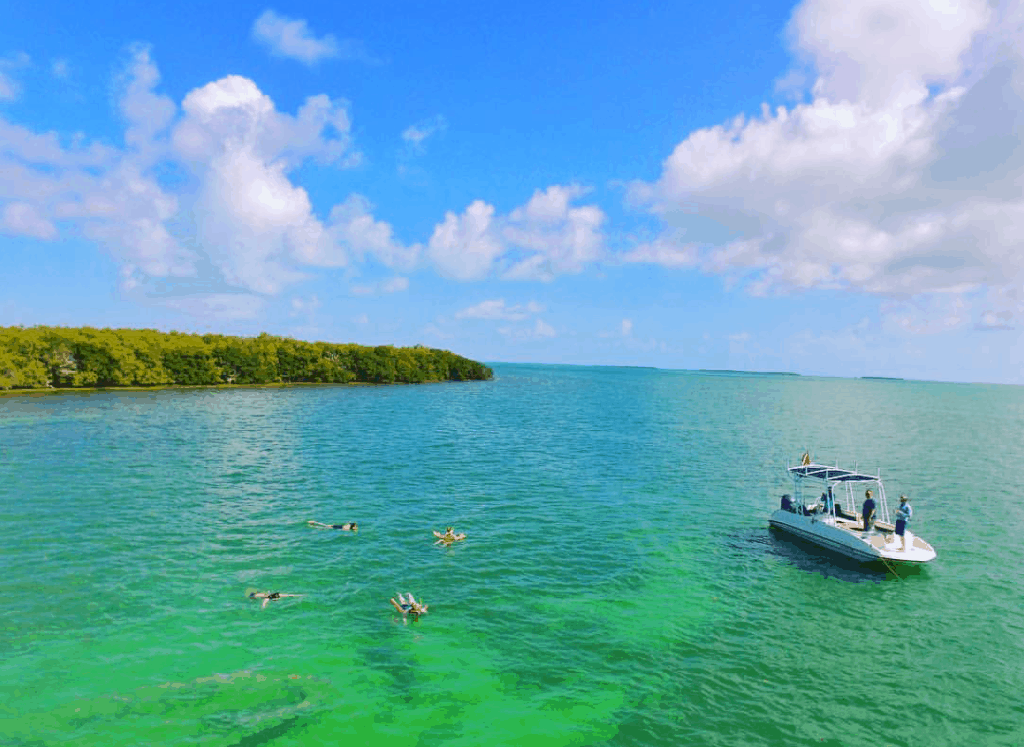 Image by Heath and Alyssa

Humans, in general, have a negative impact on turtles. Unfortunately, turtles will eat anything, meaning trash and synthetic material that is difficult or impossible for them to digest. Other sea turtles come into the hospital  entangled in fishing lines, hit by boats, or because of fibropapilloma.

Fibropapilloma is a herpes-like virus that causes tumors to grow. Skipper came into the hospital with a pretty severe case of this disease and was nursed back to health by the loving and devoted staff. My visit to the hospital was timed nicely as Skipper was ready to be released back into his natural habitat. 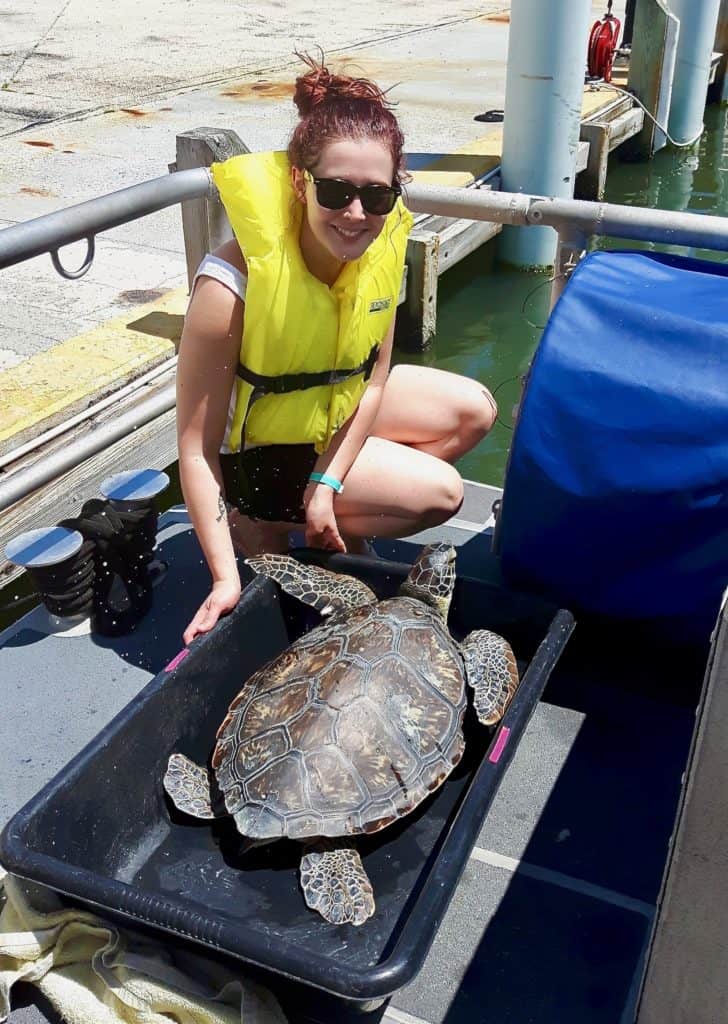 Go on a eco boat tour

There are over 250 species of birds in the Florida Keys. One great way to see them is by taking a boat tour around the mangroves. I liked the pelicans best. Captain Sam was so full of information during my boat tour. You can find her at Robbie’s of Islamorada. 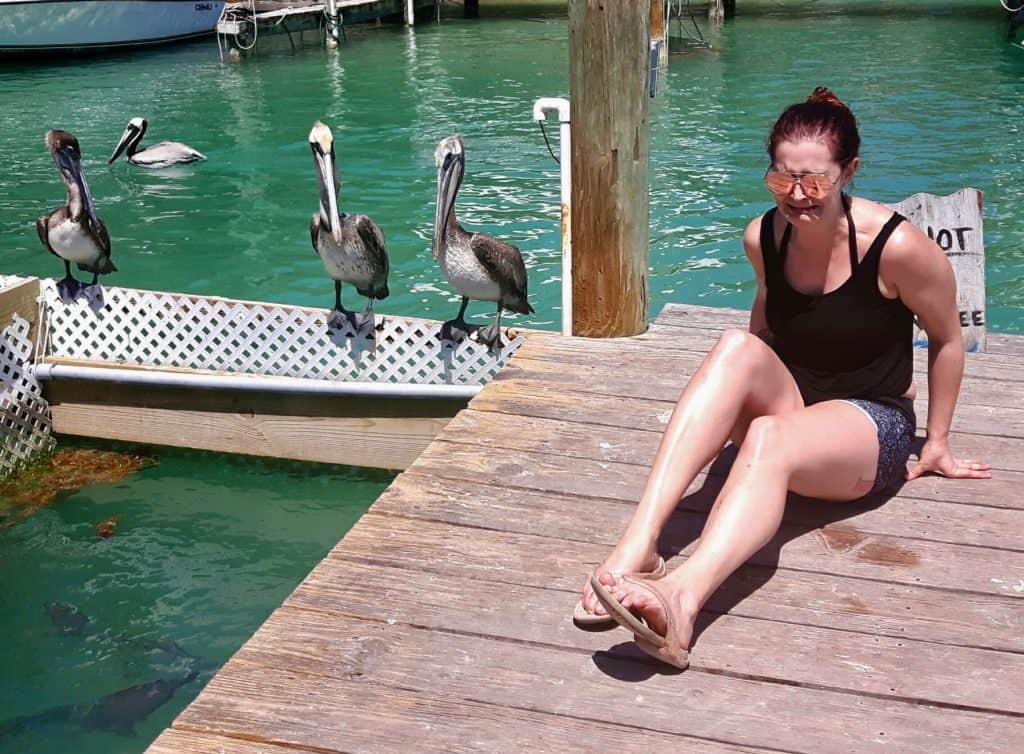 If I were to write a kids book about my accommodation in the Florida Keys it would be called Tangley Locks and the Three Cabins. Some days I have sexy beach hair; most days I have one large dread lock matted onto the top of my head. I can’t convince myself that the few sexy beach hair days aren’t worth the trouble… because they are. 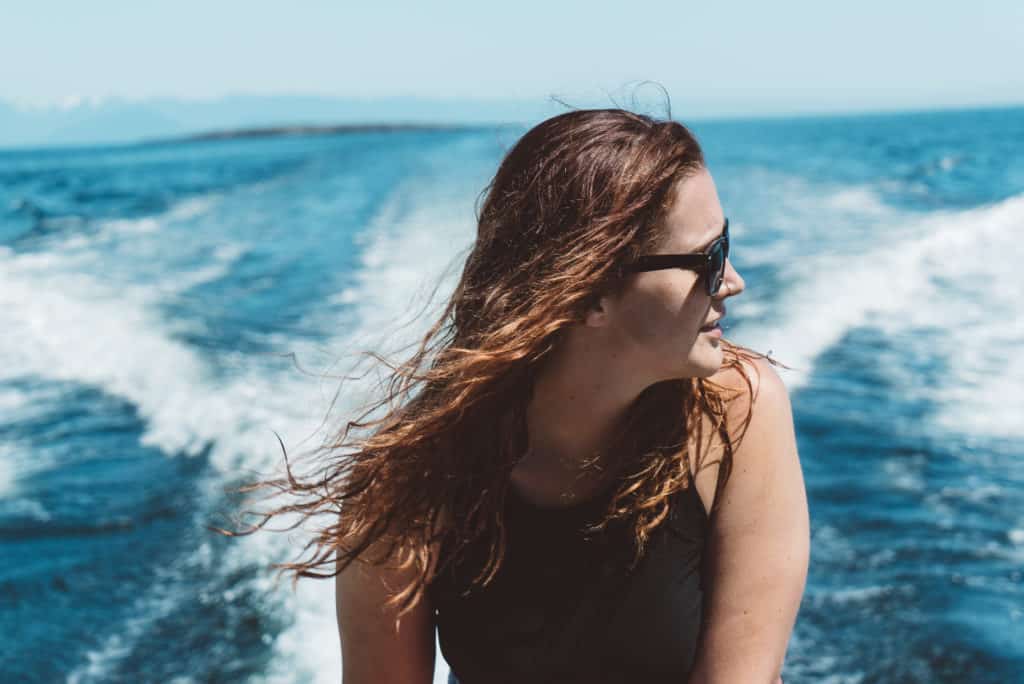 Photo by Siya, Hopscotch the Globe

Let’s focus on the cabins.

I first stayed at Miami Everglades RV Resort where I had an entire day to relax before beginning the road trip to Key West. In my short time at the resort, I went for a couple of strategically timed runs on the track (early morning and late night to escape the heat!), lounged with a book by the pool, and told anyone who would listen that it was snowing back home.

Working my way down the Keys, I stayed at Sunshine Key and Fiesta Key. Each time I arrived at a new RV resort I was amazed at the views and the accommodations. As you can guess by the names, you can park your RV instead of getting a cabin. If you don’t have an RV, don’t worry. The cabins are nicer than my apartment. They’re juuust right. 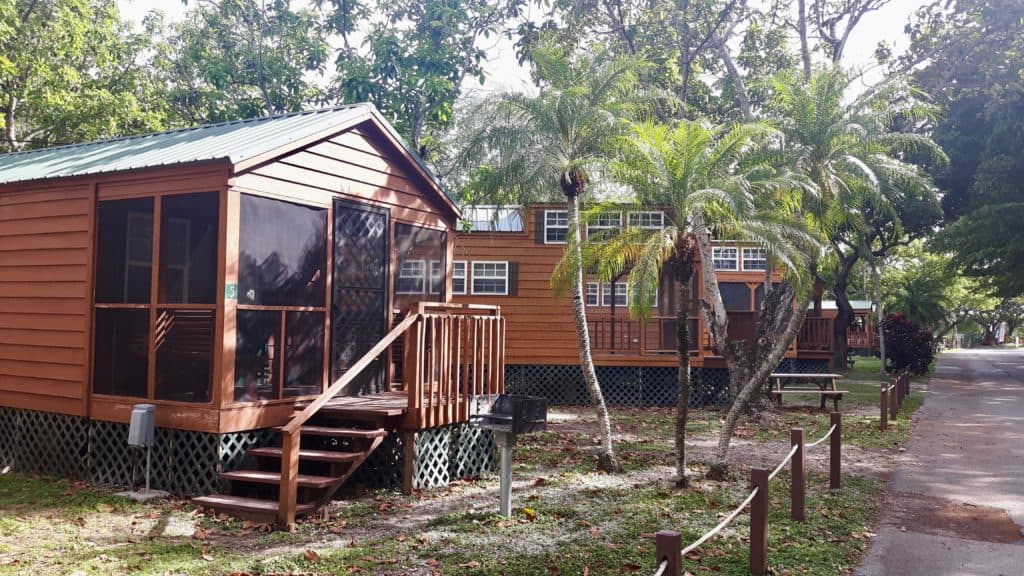 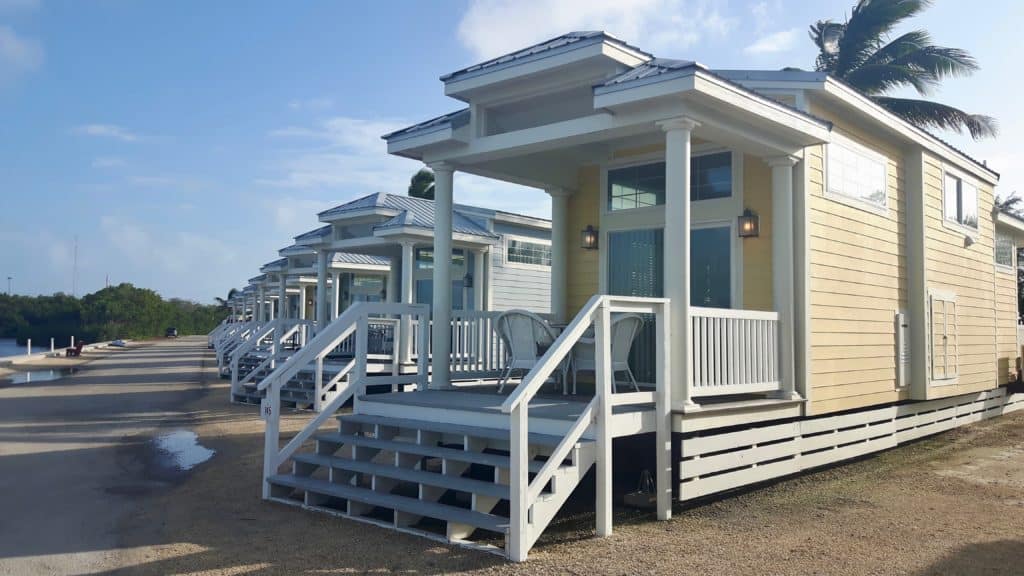 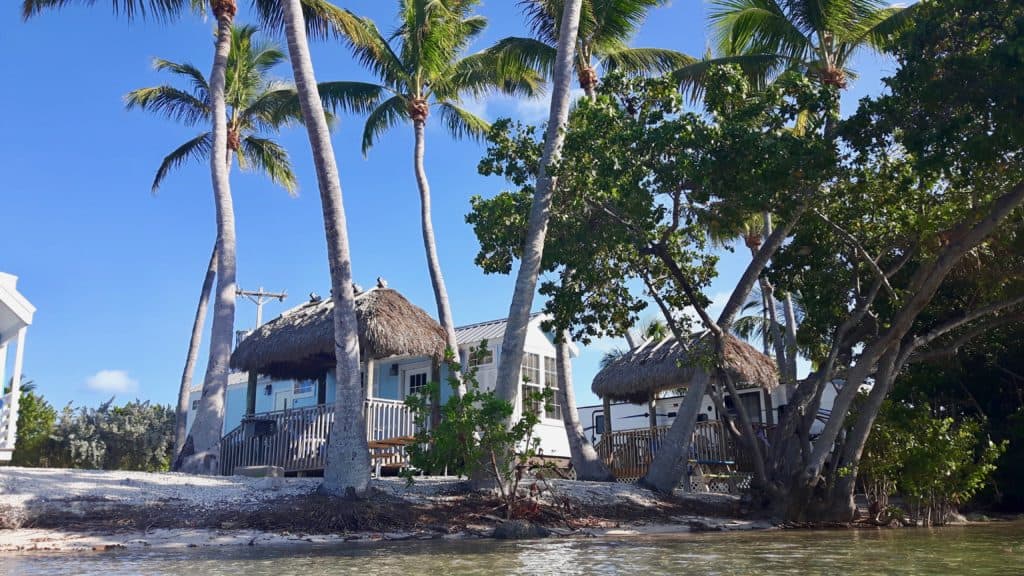 I certainly wasn’t roughing it.

I ate dinner outside while watching the sunset, kept pace along the harbour with the manatees, and woke up every morning to a beautiful sunrise right outside my from door.

When visiting the Florida Keys, you absolutely have to try to seafood. Being from the east coast of Canada, I’m a bit of a seafood snob (because ours is fantastic) and was happy to taste some dishes from the other side. 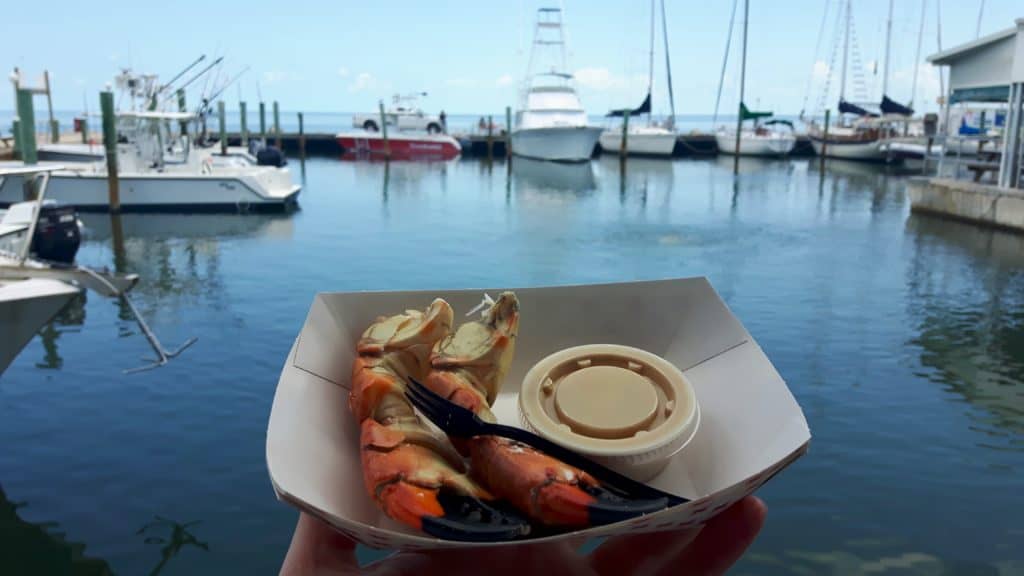 Finally, you’ll make it to Key West – the grande finale. Spending the day in Key West was great, but I do wish I had a bit more time there. The activities, museums, and fun bars can not be experienced in one day. I spent a good chunk of my time at Margaritaville (shameless fan) and wandering the streets, which, in itself, is a fun way to take in all the excitement. Stop in to the Ernest Hemingway house. If you aren’t a fan of literature, go for the cats! If you aren’t a fan of literature OR cats then we will never understand each other. Maybe go get a margarita?

8 thoughts on “A Road Trip Through The Florida Keys”