I’ve hit a few casinos in Central and South America, mostly looking for a good poker game. There was an excellent game in Panama City that I played in for 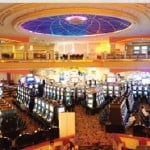 two nights while I was there. The players, mostly locals, were incredibly wild. Incredibly wild is usually a good recipe for winning, if you are willing to be patient.

The first night, I ended up doing fairly well, but lost some of my winnings at the end of the night when I started playing a little too loosely (to wild). In a game with players throwing money left and right, it’s usually best just to play a nice and conservative game and wait for them to put their money in the pot when their hand is way behind yours. I got up $500 or so dollars that night, but ended up only winning a couple hundred. Dumb play on my part.

The second night I stuck much more to the proper plan. I only played about two and a half hours. One local guy came in both nights I played. Both nights he did exactly the same thing — bought in for $500 (pretty high for this particular game, most people bought in for $200-300). He then quickly made a series of higher and higher bluff bets shortly after sitting down and usually lost the hands. Both nights he lost his $500 inside of one hour.

That’s the kind of guy you want at your table. I usually refer to that type of player as “an ATM.” Mmmmmmmmm. Tasty.

So in any case, on night two, I won a couple big hands where I flopped a huge hand and someone (in one hand, two people) made absurdly large bets trying to buy the pots. I pushed all in on both hands and took down some nice money. After two and half hours, I was up a little over $500 and decided to head back to Luna’s Castle, have a few celebration beers and get a good night’s sleep.

I thought Panama was going to be a good start to a series of Latin American poker games, but up to now, I haven’t found a casino with a game running yet. I’ve been to some casinos in Chile and Argentina, but the only poker I have run across is the video variety and one tournament that had already started by the time I arrived there, in Bariloche.

I did get to play for the first time with those big, plaque poker chips that you see in movies from the fancy European casinos. The ones that are 5,000 or 10,000 Euros. 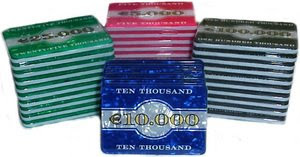 Of course, I was in Chile, and the plaques were just 10,000 Chilean pesos, but I still felt very James Bondish as I played a little craps, roulette and blackjack. Once again, feeling rich in a country where you can buy 600 pesos for a dollar.

Craps was quite lame. You weren’t allowed to back up your bets by taking the odds. There were no odds bets, just the basics, which obviously skews things quite favorably for the house. I actually had one of the longest rolls at a craps table in my gambling life — probably 20-25 minutes or so. At a normal table, I probably would have won $500-600, just making $5 bets backed up with $10-15 in odds bets. Here, I ended up winning less than $100. Roulette is a horrible game to play, but for whatever reason, I actually have won more money than I’ve lost over time playing it. Here was no different, as I won a little bit.

And then there is blackjack. I hate blackjack. I am almost positive that I have ended up one time in my entire life of playing (and yes, I play the basic strategy correctly, so there is no sense in the fact that I’m down in about 17 or the 18 or so times I’ve played). I find the game incredibly boring — and it doesn’t help that I consistently lose at it. I rarely play and I really need to make that rarely a never.

How much do I hate blackjack?? This reference will only make sense to those that know me well, but for them, it should be vivid.

Paradise is a state of mind: Maui

2 thoughts on “Casinos in Latin America”