Skip to content
Home » Destinations » Germany summed up in one picture

OK — two pictures, but one is just a cropped close up.

There aren’t many countries where you can summarize the nation’s personality in one picture, but I think this does a pretty good job for Germany.

Simply put, Germany is a count 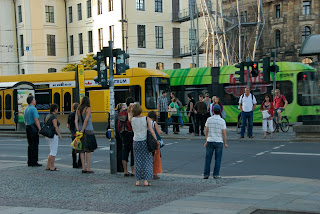 ry of rule followers. This is no better shown that at any an average intersection in the country. You must be at an intersection to see it, because no one jaywalks — that would violate the rules.

No one, I mean no one, crosses against the light.

As a side note, I dislike when people say something “never” happens or is “the best ever” or other authoritative statements of absolute truth. Look – its not the best pasta made on the planet. Its not the best song ever written. Its not the worst speech ever given or the most stupid managerial move in the history of baseball.

One of the best? Sure. Almost always? Absolutely. I’ve never had better? Great.

There is always room for a bit of flexibility in any authoritative statement. Nothing is the best anything. No one is the most evil person on the planet. And nothing happens every single time. Well, except that the sun will rise in the east, the tax man is going to want his share every year, no one will live forever, and . . .

Germans don’t cross against the 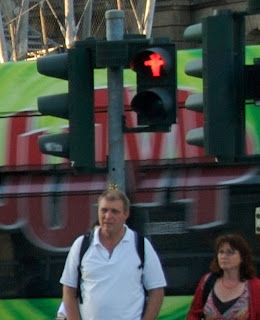 light. I have seen this in numerous cities and under numerous situations. Today in Dresden it was driven home once again — about five or six times, I would walk up to an intersection, see the red light, look around, see absolutely no traffic at all (not a lot of car traffic in downtown Dresden), and walk across the road, usually a pretty small two-lane one.

And no one else crossed with me. In fact, they all looked at me like I was an alien from another planet.

I would so want to see what they think of Cairo or Mexico City. The thoughts running through their heads there must be priceless.

By the way — here is the important part of that last picture.

And although you can’t see far enough in this picture — rest assured, there isn’t a car, bus or other vehicle anywhere in sight.

16 thoughts on “Germany summed up in one picture”