Skip to content
Home » Blog » Powerless to my Addiction(s)

I fear I have become a junky. From a mild dabbling a while back, to my now almost-constant desire for another hit. Few days — hell, few hours — go by when I don’t crave a fix. It has progressed beyond mere desire; it is a need. A compulsion. A necessity. And it is so easy to get my fix. Too easy, as my willpower is little match for its siren call. A few hours may go by without, by inevitably I will be drawn back to the rush.

It is one of my curses.

Yesterday, I woke up slowly in my empty dorm room, stretched out a bit, wiped the sleep from my eyes, and rolled over for my morning fix. Big day was on tap — my baseball team, the Texas Rangers, lost a playoff game last night. I’ve been a fan since the early 80s and this year is the first in the playoffs in over a decade. In more than 35 years of existence, they have never won a playoff series. In fact, they are the only MLB team to have never won a post-season series. Although they lost Saturday, they were still up two games to one and could win the series today, in a game that started at noon locally. My Chicago Bears were also in first place, early in the NFL season, but since they have also stunk in recent years, a nice change of pace. They got crushed last week and their game to see if they could get back on track also started at noon. 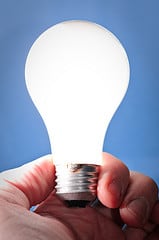 if it were only this easy

My MacBook laid beside me, where it was when I fell asleep to some TV shows that I downloaded yesterday. I flipped it open and hit refresh on the tab for espn.go.com. No reply. I glanced upwards and saw the wireless was down. It had been a little spotty here in the last few days.

I got up, threw on some clothes, grabbed the laptop and the charger and went to the kitchen to grab some coffee. No coffee in the pot. Odd. I’d been here a week and there was always coffee ready every morning.

The woman working the front desk told me that the power was out for five hours. Well, actually after a little back and forth with my horrible Spanish, I finally realized the power was out until 5 this afternoon.

This is not an infrequent occurrence in the third world. Not like it happens all the time, but off the top of my head, I can recall the following other times I’ve had the “no-power” experience:

San Juan del Sur, Nicaragua: I spent almost a month here at the end of 2008, to see if I could cope with myself for extended period of time, prior to embarking on my planned year, round-the-world (RTW) trip. The power went completely out in town three or four times in that month. 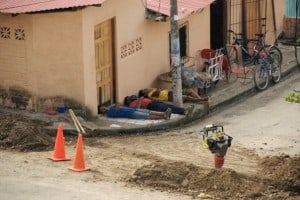 No power? No problem. Siesta time in San Juan

One memorable night there, the power went out around sundown, I went to my favorite restaurant in town, had dinner by candlelight, and then DJ’d at a local Nica after-hours disco from my iPod. I have fond memories of the no-power nights there — walking around town in the light of the moon, and also in the light of the places with generators. That is one of the other things I remember; a lot of businesses and homes had generators. The locals take these power outages completely in stride, as they happen fairly frequently, and the number of generators in town is a good way of predicting the frequency with which they occur.

Ethiopia: I spent about a month in Ethiopia in 2009, while dealing with visa problems and other travel hassles that I’d like not to relieve in my mind. One of the problems when I was there was that the entire country was subject to planned rolling blackouts. Apparently, there hadn’t been enough rain the previous year and so the reservoirs didn’t have enough water to provide hydroelectric power every day. As a result, the power was on one day, then off the next day, scheduled through the towns.

Biggest memory of these power outages? Driving through Addis Ababa, which is a fairly traffic heavy place, with my favorite taxi driver and having him point up at the non-working traffic lights and him saying, “no power.” Yea, that is comforting.

Moshi, Tanzania: These blackouts weren’t planned, as far as I could tell, but they must have been common — It was in Moshi and San Juan del Sur that I saw the most generators at use. I was there for a couple weeks, before and after climbing Kilimanjaro, and the power outages were every couple days or so. Best memory there was related to the power situation: there were tons of people that set up shop on the sidewalks in town to sew things. Interestingly, almost all were men and they all used manual, peddle sewing machines, so that the power outages didn’t affect their business at all.

Taganga, Colombia: We lost power a couple of times a few weeks back in the tiny village of Taganga. This was partly a relief one day, because the across-the-street neighbors to the hostel I was staying at played the loudest music I have ever heard out of a residence. Think “11” on the 1-10 scale per This is Spinal Tap.

So needless to say, the lack of power was a bit of a relief from my normal morning routine there. Other favorite memory: local little pizza joint that was run literally out on the front porch of someone’s house. Really good, thin crust pizza properly cooked (too many places don’t cook the pizza enough to make the crust nice and crispy) and on one powerless night, getting to eat in their living room, since it was drizzling outside. Interesting side note on power-free days and nights is also that getting food usually isn’t a problem, because almost all places use gas to cook their food.

On this powerless day in San Gil, I walked across the street to the town square, which was packed on this wonderful Sunday afternoon. I don’t know whether that was a byproduct of it being Sunday or that there wasn’t any power, but it was nice to sit on a park bench, drink some freshly squeezed lemonade and just watch. There aren’t too many generators in this town, or in Taganga, so I’m thinking power outages aren’t that common in Colombia.

The memory I will have of this particular day is the soft ice cream/Frosty vendors in the park. They sell their ice cream cones from rickey little push carts and were one of the few things with power in the town, since they have a antique little gas-powered motor in the cart cooling the ice cream and pushing it out onto the cone.

I’ve written before about my thoughts on unplugging and brain rot. One of my favorite articles on the topic of the internet and our modern attention-deficit culture is one that I re-read in preparation for writing this post, after getting power and internet back, of course. Is the Internet Making Us Stupid?

I could likely make a serious of pithy comments about spending too much time on the internet, taking a step back and enjoying real life more, and the wonders of living in parts of the world that harken back to days of yore. But I shall not. Given what I am up to these days – researching and writing – I need the internet. Occasional powerless days are nice reminders of what life was like a ways back, but I sorta enjoy where we are today.

Then again, perhaps Steve Martin had it right — a simple life. 😉

6 thoughts on “Powerless to my Addiction(s)”