Skip to content
Home » Blog » Friday is the new Saturday

I was wandering around Amman, Jordan on Friday looking for a place to eat a little lunch and having a hard time of it. Most places were closed. It reminded me a little bit of when I was growing up in the South and most stores were closed on Sundays because of Blue Laws.

Why were they closed here on Friday though, you ask?

Because in the Muslim World, Friday is our Saturday. Actually, it is a lot closer to what our Sunday was a few decades ago, ergo my Blue Laws reference. 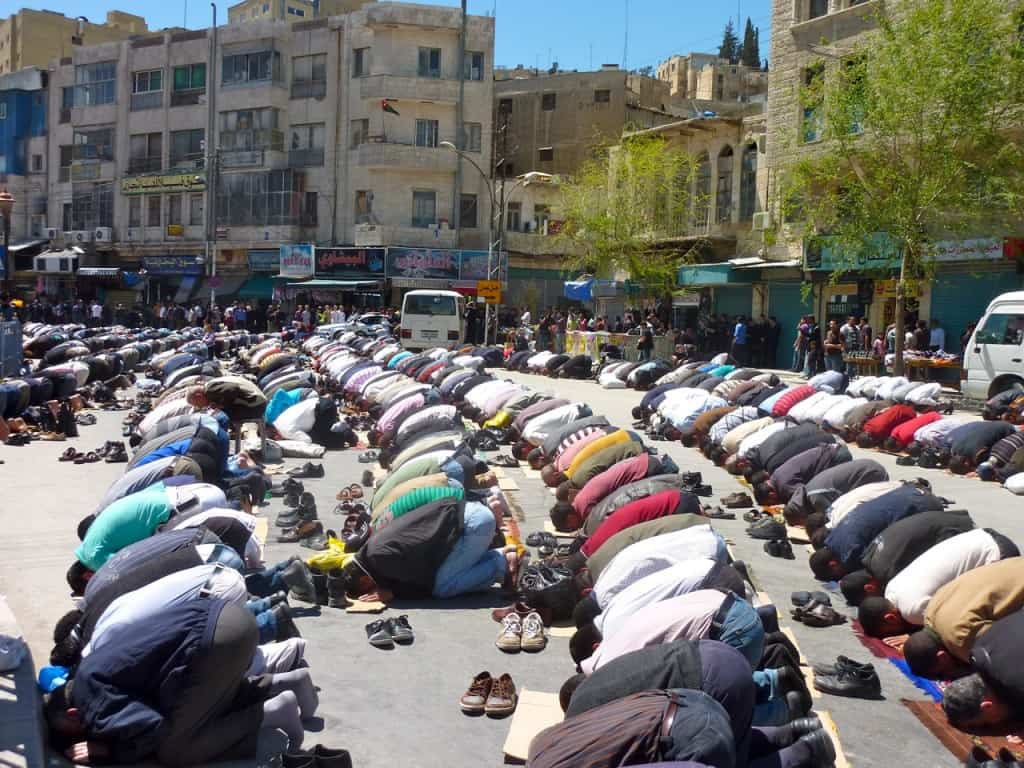 mid-day Friday prayers spill out to the streets

Until reforms just during the last decade, the weekend in most Muslim countries was actually Thursday and Friday, but they changed it to Friday and Saturday to more accommodate the worldwide financial markets’ typical opening and closing times.

Why Friday in the Muslim world? Because that is the day of mandatory prayers, called Salat al-Jumu’ah.

There are Five Pillars of Islam and one of them is that one must pray five times a day, as specifically designated times, facing towards the holy city of Mecca. These prayers can all be done on your own at any location, except for the mid-day Friday prayer.

The Friday mid-day prayer is compulsory (for all men over the age of 10) and must be done at the mosque. Which leads to another interesting component of Fridays here in the Middle East — at least here while things are a bit unsettled politically.

Because a large number of people attend Friday prayers, to the extent that they regularly flow out into the streets because there isn’t room inside for everyone, it provides the ability for the population to get all fired up at the same time. As some of the unrest in the region is fueled by Muslim clerics wishing to see some big changes at the top, getting everyone fired up at the same time every Friday is a heck of a political tool.

Ergo the Friday “Day of Rage” that you see on TV sets back in the States. 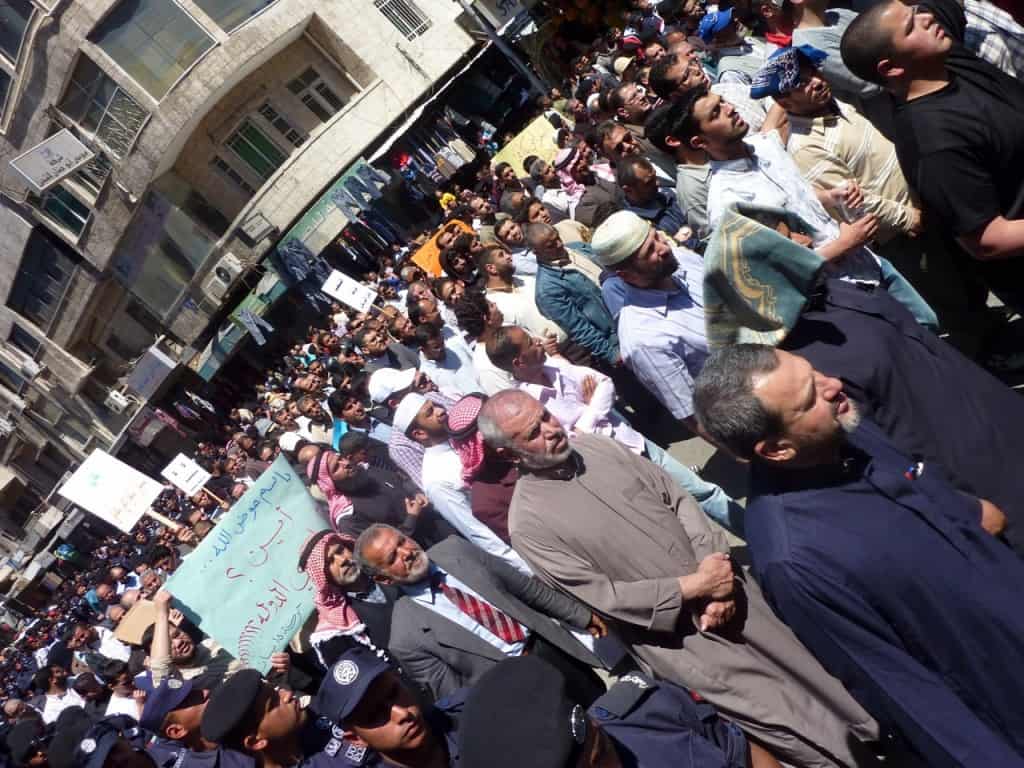 Here in Jordan, things are quite calm. From what I can gather, Jordan’s King Abdullah II is actually pretty popular. He was also one of the first leaders in the region to make some quick reforms when the winds started blowing next door in Egypt. 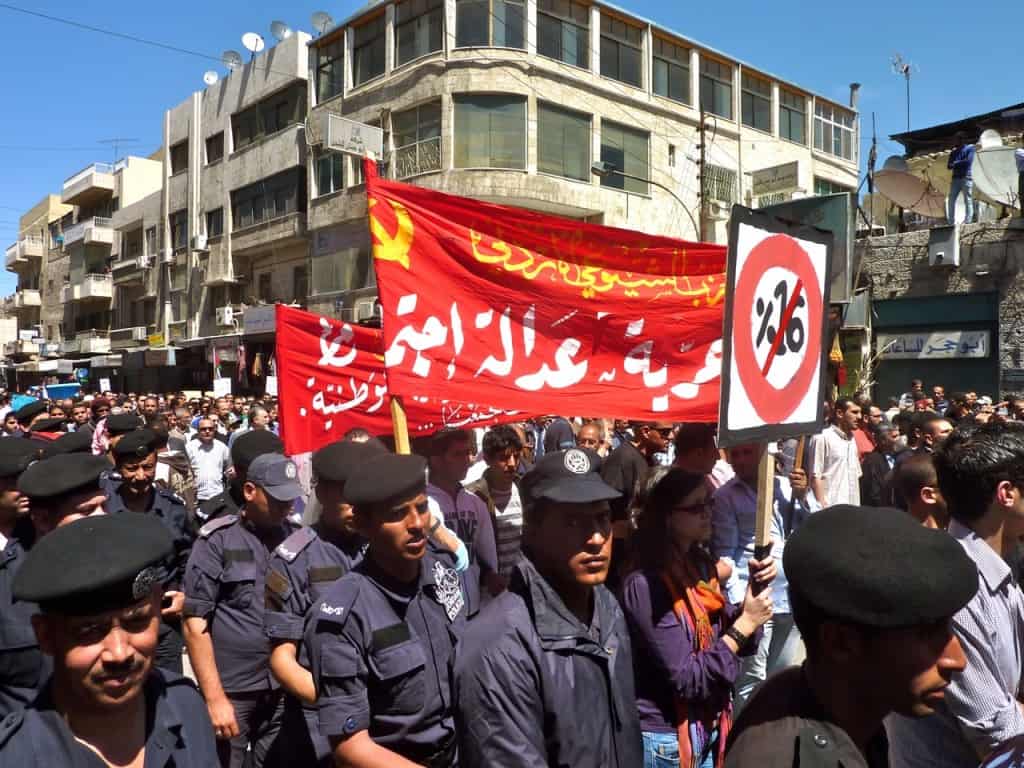 the police merely watching the marchers here - no violence

Even so, there have been some protests here in Jordan, although not any violence that I am aware of.

People here seem more concerned that some of the problems that are more visibly bubbling up on their northern border, with Syria, may boil over and cause trouble in the area. But for now, there is almost nothing of anything going on in Jordan.

So, if you are thinking about any travel in the Middle East right now, in my opinion, Jordan is very much a safe destination. I’ll be writing a good bit about my travels in Lebanon in the coming days and that is also quite safe. Syria seems to be rocking back and forth a bit, but it isn’t on most people’e tourist agenda anyway (although it is a truly fabulous country).

And I’ll be down in Egypt in a matter of days, but I imagine the most news you are going to get out of me there is how warm and sunny it is and how perfect the conditions are for diving, an occasional beer, writing, and a nighttime cigar overlooking the tranquil Red Sea. And I wish I would have stopped to take this photo of the Citadel right there in Amman or joined my friends Dave and Deb around the corner at the Feynan Eco Lodge — what a spot!

24 thoughts on “Friday is the new Saturday”