His Holiness, the Fourteenth Dalai Lama (Nobel Peace Prize, 1989) is speaking at my local university and the place I got my law degree today, the University of Arkansas at Fayetteville. The title of his talks are “Turning Swords into Ploughshares: The Many Paths of Non-Violence” and “Non-Violence in the New Century: The Way Forward”.

Non-violence is something I believe strongly in and I applaud his frequent praise of the method of bringing about change, but if he is talking today about HIS role in active non-violence, specifically as it regards his homeland, Tibet, I call bullshit.

In short, I think he is completely miscast as some sort of guru of active non-violence, both by himself and his millions of adoring fans.

Before you scroll down and trash me in the comments for what is going to be a partly negative post about one of the most admired people on the planet, stick with me for a bit. Do what the Dalai Lama would undoubtedly do in your position as a reader… 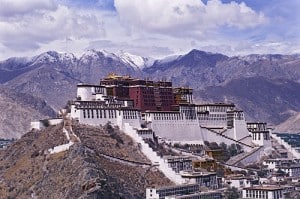 Read what I have to say. Think about it for a minute. And then, and only then reply, with this big, big consideration utmost in your mind:

I love the Dalai Lama’s message. Heck, I’ve never met the guy, but I can say that I love him as a person. He’s a great man. I have read a good bit about him and thought through most of this when I recently finished Pico Iyer’s book about the Dalai Lama, The Open Road: The Global Journey of the Fourteenth Dalai Lama

. It is a fantastic book that I recommend for everyone.

The Dalai Lama’s message of tolerance for others, humility in yourself, desire for improvements in the environment, and the necessity for all of us to work together to make the world safer, more peaceful, and more compassionate is something that I desperately wish more people would listen and pay heed to. It is a fabulous message.

As a Buddhist messenger, or tolerance messenger, or humility messenger, or messenger that asks us all to think about the small and big ways we can each make the world a better place to live, I admire the Dalai Lama perhaps more than anyone on the planet. 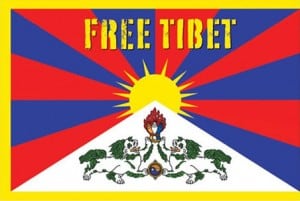 the flag for the cause

But as to the political side of his message — the “Free Tibet” or the more current incarnation of “Meaningful Autonomy” of Tibet inside China, I find his actions far less worthy of the near-universal praise he receives.

(Another insertion — yes, I know that the Dalai Lama has recently announced he will step down as Tibet’s political leader, but I still don’t think that makes him immune from critique for the last few decades of his actions and his current actions in this portion of his public arena.) 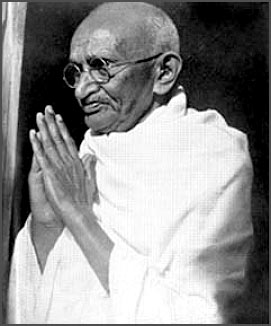 a true hero of active non-violence

What do all those practitioners of have in common that is in direct opposition to what the Dalai Lama has done??

They stayed in the countries they were trying to change. They actually committed acts of active non-violence — strikes, marches, public speeches against the law, non-cooperation, forming political parties against the law and so on and so forth.

None of them left the battleground of active non-violence, which is the country where you want the change happen.  They were imprisoned, beaten, spied on, kept from their families, denied the ability to make a livelihood, and in MLK’s case, assassinated. They not only talked about non-violent change… then did it.

They went face to face with some of the most violent and tyrannical governments of all time: the aparthaid governments of South Africa, the Communist regimes of Eastern Europe, the current Burmese dictatorship and so on. One of them is facing down the same current Chinese government in prison right now that the Dalai Lama has supposedly been practicing “non-violence” against for over 40 years.

Would the Dalai Lama have faced likely house arrest, imprisonment, beatings, or even death, if he’d returned at some point to practice active non-violence in Tibet against Chinese rule? Very, very likely. China has killed hundreds of thousands of Tibetans, including hundreds or thousands of monks, and destroyed countless monasteries and holy places. The 2010 Nobel Peace Prize winner, Liu Xiaobo is currently sitting in a Chinese prison.

They stayed. They fought, non-violently, though valiantly. They protested. They did the day-to-day things in the face of tyranny and injustice that made them the true Greats of Non-Violence.

I’m sorry, but the Dalai Lama isn’t on that list for me, at least not as a practitioner. He gives lovely speeches about it, but his mundane actions haven’t met the elegance of his prose.

I’ll end this where I started. I love and admire the Dalai Lama. He’s a great man. His message of compassion, love, tolerance, and yes, of non-violence, is a message that I applaud fully and wish more leaders and regular people took to heart and followed. That portion of his life, deeds, and words is one that I could not have any more admiration for.

But as to his personal actions of non-violence to free his homeland… for that, I can’t join the throngs that sing his praises.

One last thing I love about the Dalai Lama. If I were ever in a room with him with enough time to discuss this issue, I feel certain of this. He would listen completely. We’d have a spirited exchange of thoughts and ideas on the topic. He would give my opinions the full weight of his consideration, as I would of his.

And in the end, I also feel confident he’d turn to me and say something like, “Michael, you very well might be right. I really don’t know if the path I chose was the correct one. None of us is perfect, including me. And I appreciate you taking the time to talk about this with me.”

Love that dude. Wish I could meet him someday.