I had no idea what the Eurovision Song Contest was until around dinner time last night, here in Dahab. I was doing a little work on the computer at a little restaurant right on the water and noticed everyone intently watching some show on television. It was the finals of Eurovision.

There is no accounting for taste I guess. 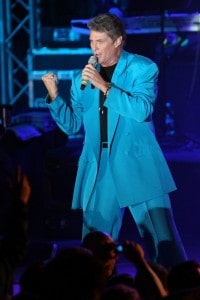 hard to explain the fascination…

From the continent that has decided that David Hasselhoff can sing and that Jerry Lewis is funny, this music/talent contest is right in that vein.

As I understand it, here is how it works. Each member country of the European Broadcasting Union submits one song to represent its country that will be song on live television (which was last night). Countries are free to choose how they choose their song on their own, but the songs can’t have been previously released commercially.

Then the bands perform their songs on live TV and you can vote for the song of any country other than your own by telephone or text message. As I understand it, the winners are chosen by this public vote making up half the score and five-person expert panels from each country making up the other half.

But let’s forget the rules and such — well first, I suppose, congratulations to Azerbaijan, who won last night. Let’s get to the videos.

The thing for me that makes this whole thing really fun is how completely and totally campy some of these performances can be. Don’t get me wrong, there are some really talented performers, but let’s roll some of the funniest and most amusing videos from Eurovisions of years gone by… enjoy.

These guys are soooo creepy and scary. Not scary in the way they intended though, I bet.

Riverdance comes to the Ukraine… in weird outfits.

Thinking there is something in the Ukrainian water… (and why are they counting in German?)

I don’t know whether to title this one, “The U.K. has a long history of suckage in Eurovision” or “The Ode to the TSA, from the U.K.”

(1) Another pathetic effort from the U.K. (2) White people shouldn’t try to rap, as a general rule and (3) the schoolgirl outfits… really??

This is so much more fun than making fun of the horrible American Idol contestants. Those people don’t ever make the finals.  These performances are supposedly the best that an entire country has to offer.