An celebrity impersonation show combines nostalgia, campiness and hilarity. They are a fun sing-along and also a gentle laugh-at, all for the price of one ticket.

I am not sure I’ve ever been to a impersonation show. Wait, I take that back. I do remember stumbling into a transvestite drag show years ago in Key West with a group of friends. That was an interesting night.

So was this one. 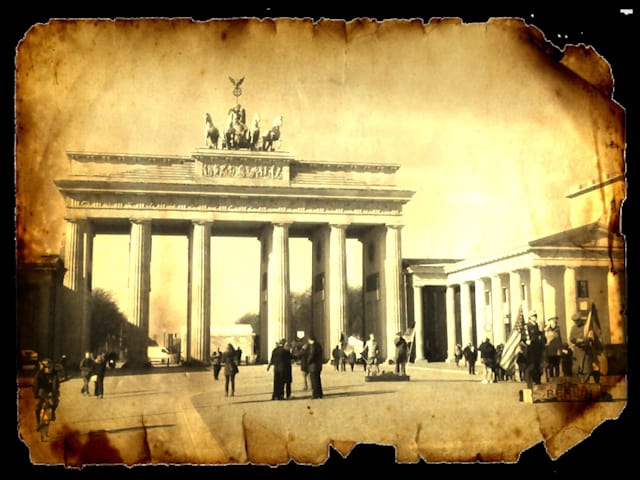 I was in Berlin to do some social media consulting with the wonderful people at Visit Berlin with a Blogger-Who-Shall-Remain-Nameless. She received a couple complementary tickets to the show at the hotel she was staying at and invited me over. As I sat in the show, I typed up my notes and showed them to her as the show progressed.

She insisted that she be the “Blogger-Who-Shall-Remain-Nameless” as a result.

My Real Time Review of the Impersonators

Stranger: What do what do you do for a living?

Dancer: I shake my tail feathers at a Blue Brothers impersonation show.

If you are going to choose a career path, you gotta embrace it 100%. No regrets.

At this point, the first quotable comment from the Blogger-Who-Shall-Remain-Nameless:

BWSRN: I gotta admit, I am too young for the Blue Brothers to mean anything to me.

Me (looking around): Unlike 90% of the audience here who have already picked out grave sites.

I’m still surprised she didn’t want to be affiliated with this post by name. 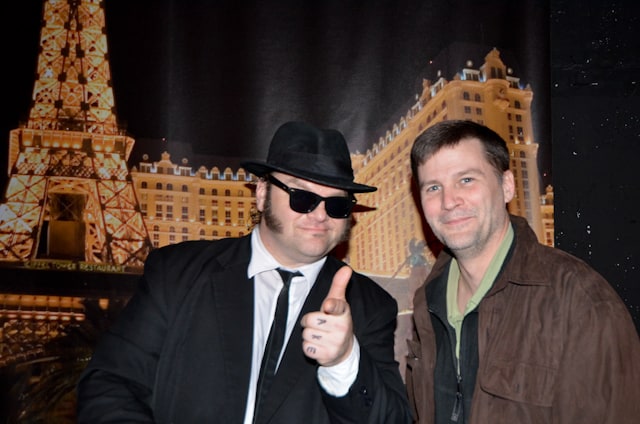 The smirk was unintentional, but I wish I’d gotten an autograph

They didn’t introduce the singers when they took the stage. They strutted out to the music and you were left to figure out who they were. Some were instantaneously recognizable either by the song or by their appearance, Madonna and Freddy Mercury being two of those.

On the other hand, a woman came out singing Chapel of Love (“going to the chapel and we’re gunna get married”).  BWSRN turned to me and asked who it was. I said, “based only on the boobs and the short curly hair, I’m going to go with Bette Midler.”

I know my boobs.

As soon as I recognized the next song, I sat up in my chair. I turned to BWSRN nameless and said, “do you know what this song is??!!”

To set the stage a bit, the crowd at this show seemed to be about 90% German, with some scattered non-German tourists like us thrown in. And to reiterate, we were in Berlin.

I feel confident I was one of the few in the audience to appreciate the irony. In short, that was a song originally done in 1941 to get up public support in the United States for the draft and the military. We were about to go to war and eventually subdue and beat the hell out of… well, no need to beat the irony drum too loud.

I turned to BWSRN and said, “if they play Springtime for Hitler next, I am going to lead the standing ovation. Just be ready.” By the way, if you’ve never seen the Producers, do yourself a favor and enjoy this 3 minutes. Perhaps the best Mel Brooks song he ever did — and that is a tough list to top off.

Next up was Freddy Mercury, who was one of BWSRN’s favorites. He sang Radio Gaga and was quite good. I wanted to make a joke about the impersonator looking like what Freddy Mercury would have looked like, if he’d made it to middle age and added a nice pot belly, but then I just looked him up on wikipedia and it turns out that he actually lived to the age of 45. I thought he died younger than that.

On came Madonna. She sang Express Yourself and then Like a Virgin after a costume change.

Oddly, watching an impersonator made me realize how talented  the real Madonna is as a dancer and performer.

This woman actually sang almost as well as Madonna, but her performance wasn’t half of what Madonna could do.

I’m not sure until exactly that point in the show that I ever truly realized how much of a difference stage presence determines your enjoyment of a performance.

She went into the audience during Like a Virgin and gave a lap dance to an older gentleman. I looked around to make sure there were EMTs at the ready. For Living in a Material World, she patted down another guy, took his wallet, then walked away and threw it back at him. During her Vogue effort, I looked at the expressions of abject mystification on the faces in the audience and wished I spoke enough German to ask them what they were thinking.

A young Louie Armstrong was next. He did a nice job with Hello Dolly and High Society. Then came Joe Cocker. There would have simply been no way to ever recognize this person as Joe Cocker, minus the songs. BWSNR didn’t really know who Joe Cocker was and asked “doesn’t he look like the guy from Saturday Night Live? You know. The one that died?”

You need to be more specific than that.

the gang’s all here!!

Joe Cocker is one of my favorite singers. Interesting trivia – he was the person first considered to be the lead singer for Led Zeppelin, before Robert Plant got the gig. He’s got at least a dozen amazing songs, including Unchain my Heart, which this guy sang, but then they screwed up and had him do Up Where we Belong (with Better Midler) and then somehow even managed to pick an even worse song, You Are So Beautiful.

It was an Andrew Lloyd Weber moment for me.

He then played Leave Your Hat On. I had a flashback to watching “9 1/2 Weeks” with my college girlfriend. No, you can’t hear the rest of that story.

Madonna came back on and sang La isla Bonita with a guy playing the classical guitar on stage. I had a brief flashback to all the idiots I have seen carrying their guitars around on their back to play and hostels in an effort to get laid.

See, there is a future for both American Idol participants and those guys.

The Blues Brothers came back on stage for Sweet Home Chicago and Shout.

Me: if these people get up and dance to this, I am going to dance with them.

BWSNR: Look! See. They are dancing. In their chairs. Well, two of them at least.

They finished with Viva las Vegas, but Elvis had the night off. Then Twist and Shout, as everyone stood and clapped.

All jokes aside, everyone seemed to have a great time. That includes me, but perhaps less so for BWSNR, since she was (and likely is) mortified with my twisted view of the world, though I love her still.

Berlin remains one of my favorite cities in the world, particularly because it is the kind of place where you can have nights like this. The variety of this town is something I look forward to every trip back there. I’ve had an unexpectedly emotional day at a music festival there, enjoyed the typical tourist sites, and gotten drunk and had a night of music and memory.

Its a city I will go back to again and again in my lifetime.

12 thoughts on “Bette, Freddy, Madonna, Louie, Joe… a Show of a Lifetime”