“You best watch out for that car, missy. My friend broke her toes on this street yesterday!”

The woman’s voice was high pitched and nasal; an American tourist I would’ve spotted a mile off, despite the fresh-from-a-stall hippy pants and the Buddhist prayer beads hanging from her neck. The throng of static cars in front of us practically bulged out into the small sidestreet openings dotted along the road. Despite being the main thoroughfare of McLeod Ganj, the road was actually little bigger than the width of one car. Now two streams of rumbling traffic were locked in a face off that nobody was going to win. We flattened ourselves against a shop front with elegant mandalas hanging in the window, in an effort to allow the oncoming vehicle to get past. A tire came to a halt in the open gutter beside my feet. The driver honked his horn, somewhat pathetically. He wasn’t going anywhere. 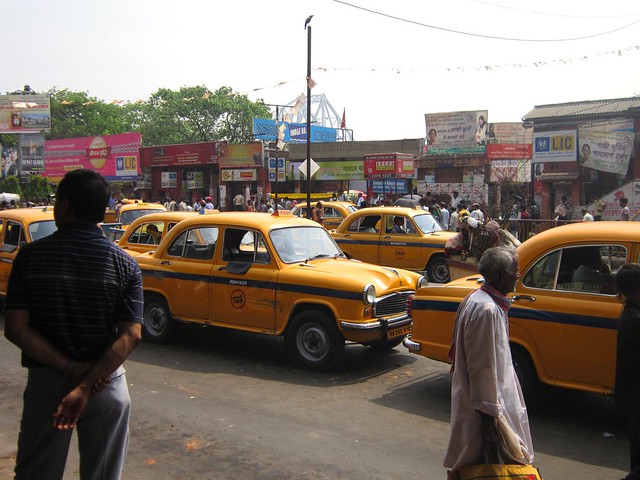 Roads in India? Something of a legend.

From sweeping state highways to narrow lanes and suffocating alleys, and from congested city streets to the winding mountain passes of the Himalayas, the country’s extensive road network is further complicated by one major thing: road rules simply do not exist in India. There’s a distinct lack of traffic lights, road signals and barely any traffic police. Then there’s incessant noise from car horns, constant speeding and a tendency for every vehicle to both undercut and overtake every other vehicle on any given journey. When you add a veritable smorgasbord of cars, scooters, pedal bikes, rickshaws, handcarts, trucks and mobile street stalls – not to mention the dogs, cows and elephants – to the mix, it’s a rite of passage to learn how to cross an Indian road as a pedestrian without incurring injury. 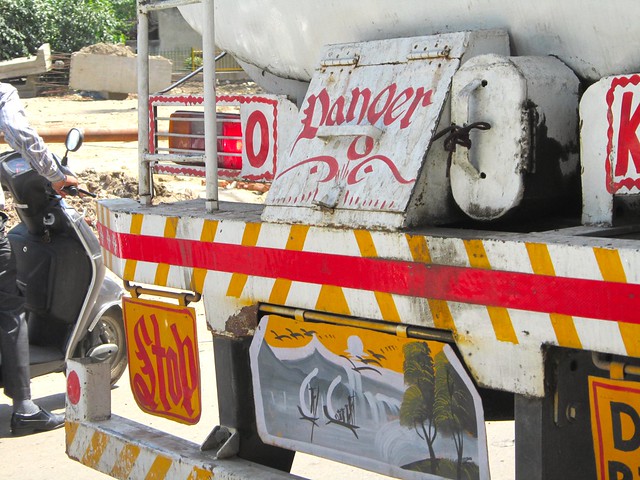 The roads of India have even achieved worldwide infamy. The Leh-Manali Highway is widely reported to be one of the most dangerous roads in the world due to extreme climate, an altitude of 2 to 3 miles above sea level and an ever present threat of landslides, while Delhi’s infamous Connaught Place roundabout is a hub for eight main roads and is the central point of the city’s business, economy, and one almighty traffic jam. But strangely enough, after a few months in the country, I can attest to the commonly used sentiment of ‘organised chaos’ among the Indian streets. Despite the maniacal tendencies of pretty much every driver, the kamikaze attitude adopted on the highways and the downright suicidal pedestrians, everything still manages to just…work. 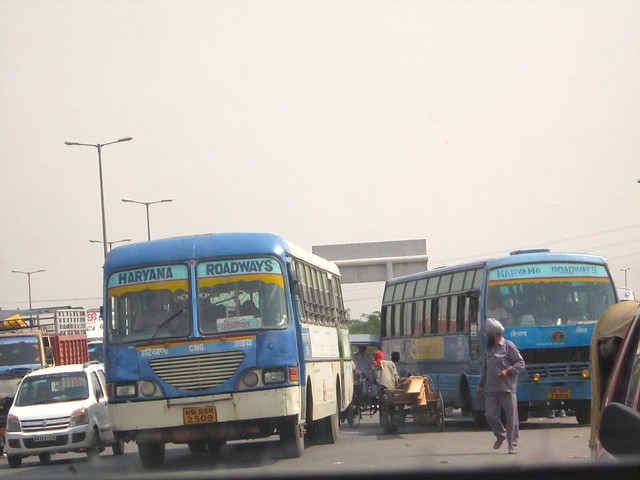 There seem to be a few reasons for this. The first is undeniable: India is huge. Its population is massive. The amount of vehicles on any given road at any time of the day or night is flabbergasting. But, because of the sheer number of people itching to get from A to B, the high likelihood of stress at traffic issues is tempered by the acute awareness that everyone simply has to get along, or risk full scale road carnage. Thus there is no road rage, and no anger at fellow drivers. Crazy, but it works. Secondly, its a mutual respect for everyone’s right to use the road that makes the system work. And finally, the most unique aspect of Indian people is their willingness to share.Whether it’s possessions, food, comfort, or a free space in amongst the traffic, you’ll often find a total stranger happy to help you out, simply because it’s so deeply engrained into Indian sensibilities. It’s then up to the visiting travellers to adjust themselves accordingly. 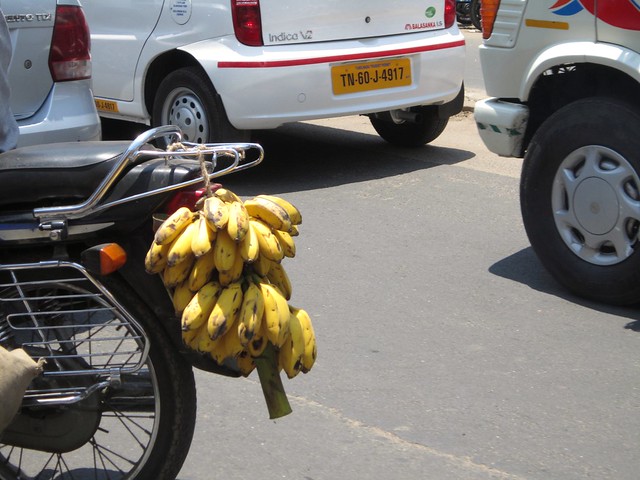 The wide variety of Indian transport

In rickshaws, with their lack of doors and an over abundance of interior decor, I learned to fold myself and my bags into a small leather covered space, and firmly negotiate fares with the casually proud rickshaw drivers, who treat their vehicles with a kind of caring abuse and often multitask their driving with a loud phone conversation and a cigarette. 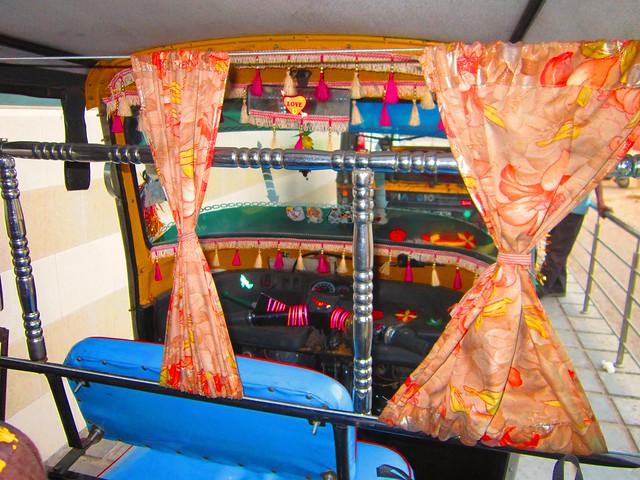 In comparison, the taxis I rode in were strangely silent, in direct correlation to their cost – but the constant tapping of children’s dirty fingers on the window from outside was awful, and the noncommittal brush offs given to these beggars by the taxi drivers was even more upsetting. 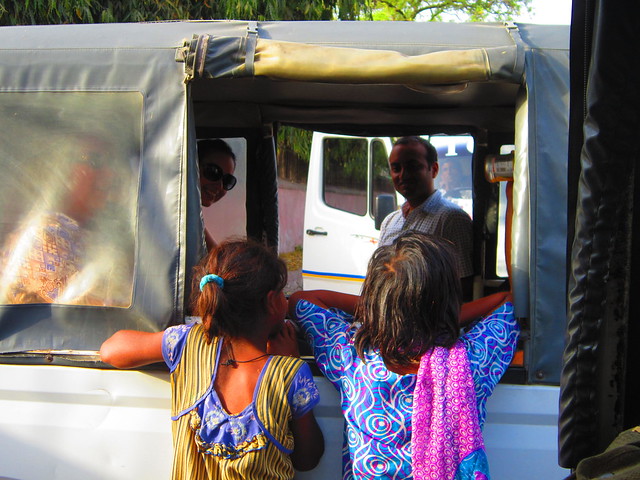 My time spent on buses was sweaty, sticky, and cramped. Long periods in a bumping metal can, knees up against my chin with both feet planted firmly on my bruised backpack. Other journeys with five bodies jammed firmly into three seats, and the distinct realisation that it was getting hard to breathe. 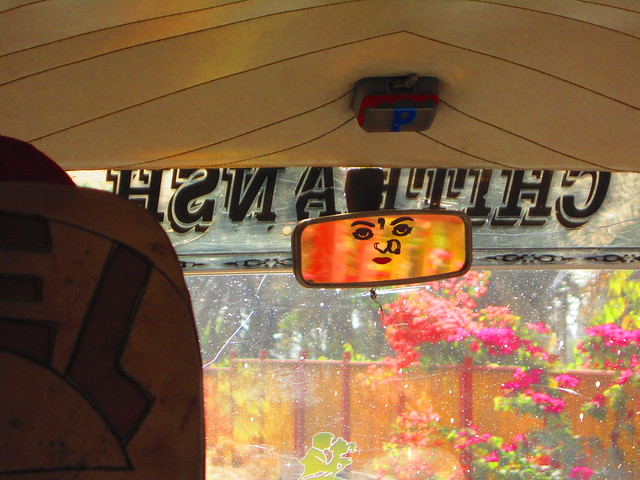 Then there was the day in the mountains at a friend’s wedding, when we hitched a ride in the cabin of a coal truck and rode atop a mound of cardboard boxes filled with crisp packets. The boys in our party sat amongst the coal, clambering out of the truck later with wicked smiles and filthy trousers. And I’d prefer not to think about the blurred, exhilarating terror I felt on the back of a motorbike. 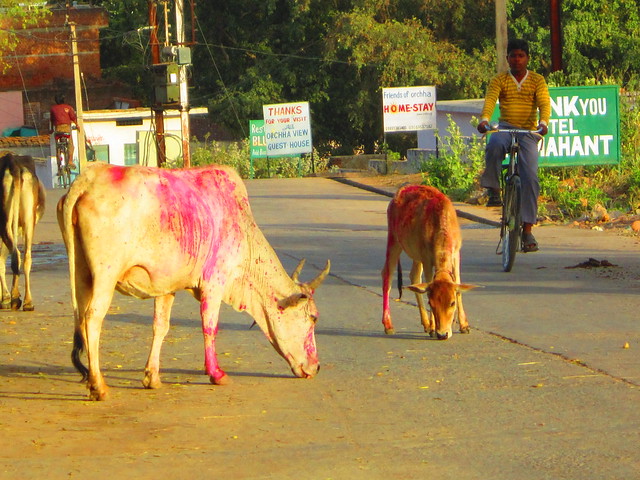 But the hours I spent on countless roads also gave me the opportunity to watch the ways in which India goes about its business. On numerous occasions I saw the excessive care shown by a succession of cars to slow down and skirt around a group of sleeping cows in the middle of a road. I saw whole families speed past on their dad’s motorbike, two or three children sandwiched between parents while often, unfathomably, asleep. Once I tried (and failed) to take hurried photos of a goat held across the middle of a motorbike, speeding down the highway with its two human companions. Luckily I did manage to capture the somewhat more stationary inhabitant of a parked rickshaw. 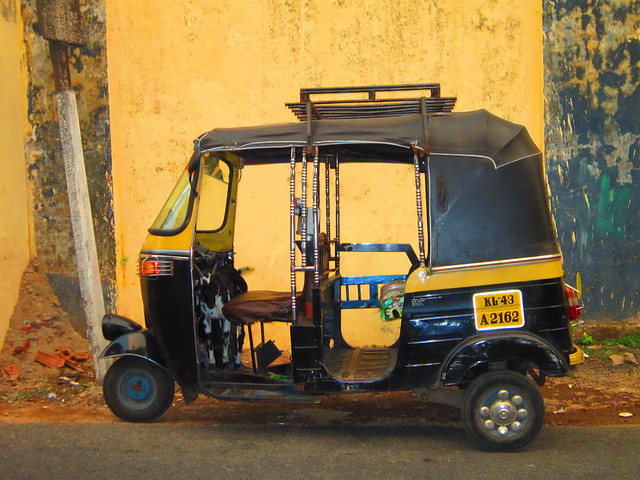 Many travellers rave about the joys to be found on the Indian rail system. The romance of long journeys, the speed and exhilaration, the people you meet. And while it certainly has its advantages, it’s sometimes difficult to get more than a vague impression of the region you’re travelling through when whizzing past at 80 mph. Taking to the country’s roads is a different experience altogether. 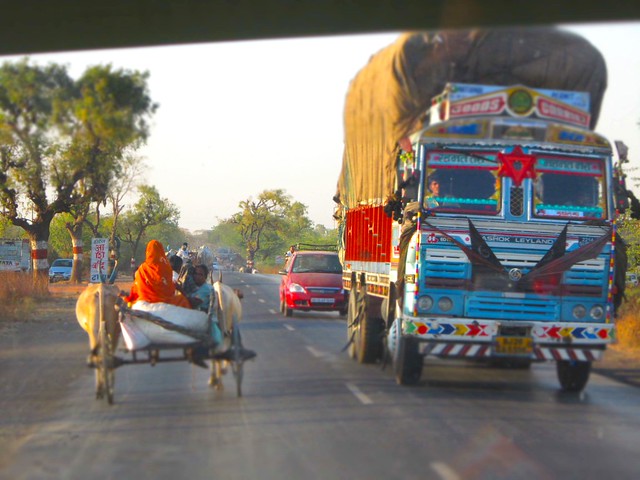 It’s where you see the old India, of sedate cows and handlebar bicycles, coming head to head with the new, where rickshaws are rocking drum and bass beats that emanate from precariously hard-wired sub woofer speakers. Elderly women in saris perched sideways on the backs of mopeds, hands resting on the waists of their husbands, versus teenage girls in jeans and backpacks confidently swerving their scooters through the traffic. 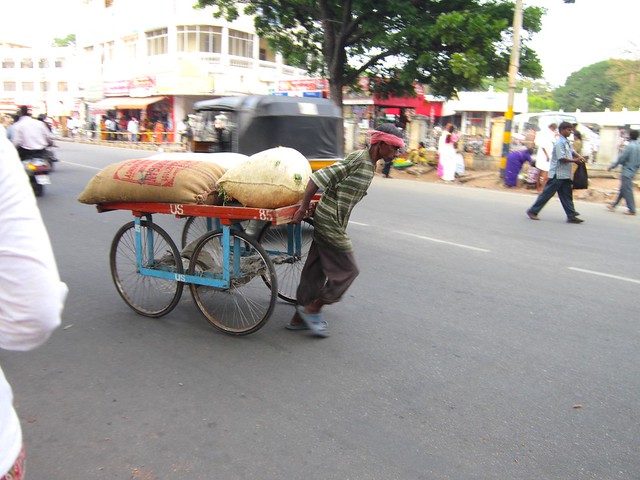 And once I learned to ignore my rabbit-in-the-headlights mentality and stride out confidently into the metallic fray of traffic, jostling with the best of them, I really felt like I’d accomplished something in India. However small it may be, successfully managing to cross the street is worthy of self-congratulation – particularly in a country with absolutely no road rules to speak of, and where the most common driver’s mantra is “good horn, good brakes, good luck”!

Flora is a writer and travel blogger who chronicles her travelling adventures at Flora The Explorer. For more immediate updates you can find her on Twitter and Facebook, where she spends a large portion of her time discussing travel.

11 thoughts on “The Highs and Lows of Indian Roads”