One of the better online photo communities out there is National Geographic’s Your Shot. It’s a unique site with 600,000+ members to whom editors assign biweekly photo projects covering topics like “The Pool” and “Bright Ideas in Action.” While it’s best to go out and shoot new material for the assignments, you can also participate by uploading something that’s already in your portfolio. At each assignment’s conclusion, the editors select shots which best fit with the assignment’s theme and publish them online in a story format.

Between the creative assignments, a positive and active membership group, and an absence of overly photoshopped edits, Your Shot feels much more accessible to me than most of the other online photo communities out there. Since I haven’t been taking many new pictures lately (that will change soon), Your Shot has been the best way for me to keep one hand in the photography arena by uploading many of my past travel shots. It’s also been a fun experience to view and learn from other photographers’ work.

This year I’ve been honored to have some of my shots do pretty well on the site, particularly the following two which I shot in Iceland in February 2015. 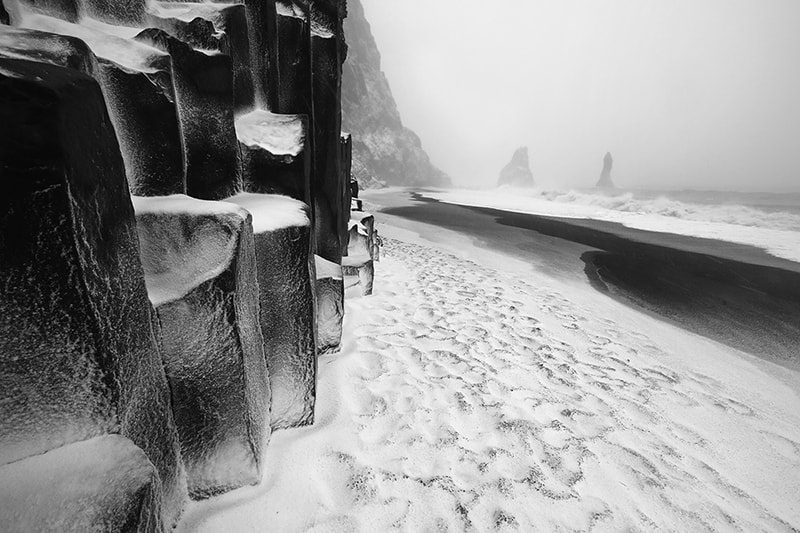 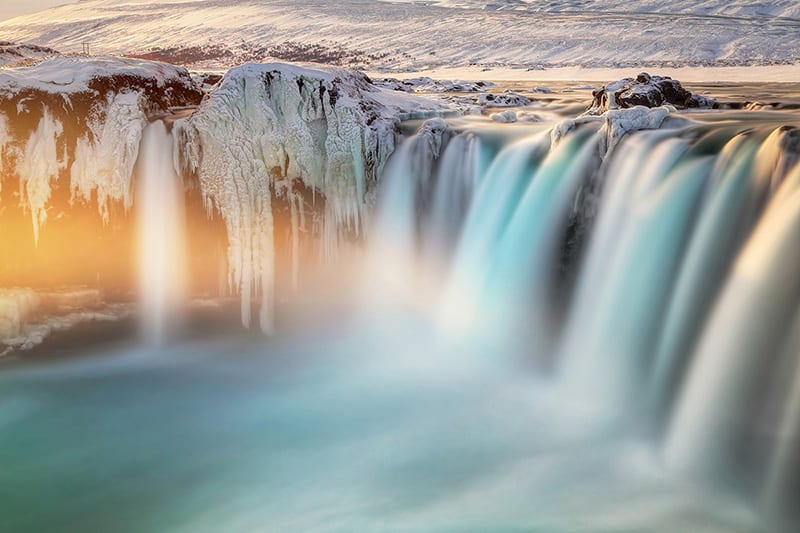 One recent Your Shot assignment was to shoot the cover of National Geographic Traveler. In addition to publishing a story online (as is done with every assignment), the editors would choose one winner and put it on the cover of the December/January issue of the magazine. Not everybody in the Your Shot community loved this idea, and I too was initially torn. Should the cover really be up for grabs by the winner of some contest?

I got to thinking, and I decided that we in the Your Shot community are the people who love to travel, we are the ones who love to take pictures, and we are the ones who read the magazine. There is a TON of talent on Your Shot and I’ve seen thousands of cover worthy shots. So why shouldn’t we in the community be the ones to submit a shot for a potential cover? The winner of the contest does get paid the standard Traveler cover fee; this to me was important to note – not so much for the money, but rather to know that the winner would not be doing somebody else’s job for free. 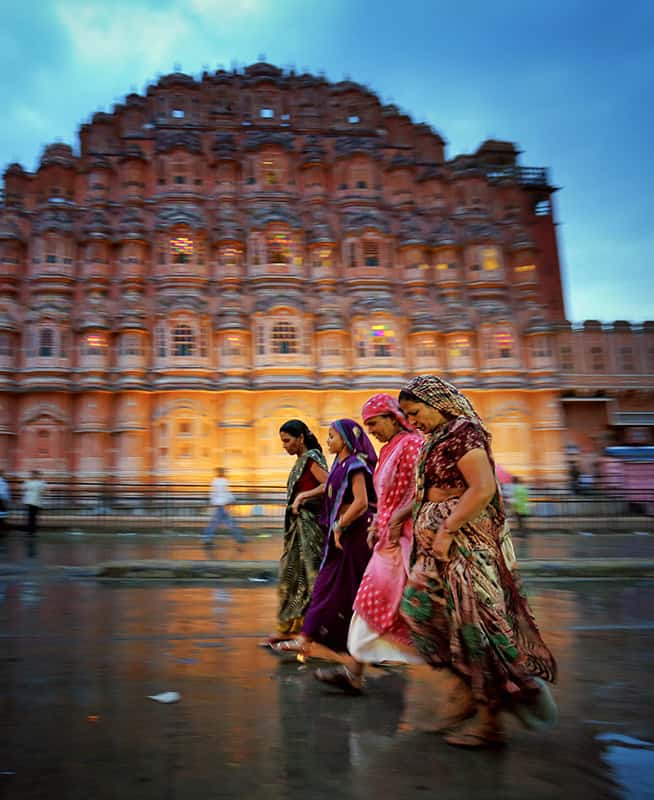 I have always liked this shot from Jaipur, India back in 2012. Although it was shot in landscape (horizontal), I cropped it to vertical and I submitted the photograph. To my great surprise this photo is now a top 15 finalist out of 34,000 pictures (!) While I don’t think I have much chance at the actual cover, it is quite awesome to see my picture alongside the 14 other potential covers on National Geographic’s Instagram account:

34,000 images narrowed down to this wall. Visit the link in our profile to see the editors top 15 photos from the Best of the World assignment. One of these images will be chosen for the cover of @natgeotravel magazine's Best of the World issue. Which do you think best suits the cover? #natgeocover #bestoftheworld

The top 15 are here! One of these will be the next cover of @natgeotravel magazine. See the link in our profile to view all 15. Which would you like to see on the cover? #natgeocover

I just love traveling in India because every time I go there I experience the full spectrum of travel emotions – from the stress I feel navigating the modern city traffic to the peaceful tranquility felt at the ancient temples. I’ve been to India a handful of times and it’s always an adventure, as I’m sure anyone else who’s been there can relate (and many locals would agree.)  I usually travel with other people, but on this particular trip I traveled solo – it is much easier to focus on photography when I’m by myself.

It took me nearly 24 hours to get to Mumbai from my home in Chicago. It’s funny how exhausting traveling can be. All you really do is sit there on an airplane, so why is it so tiring? Maybe it’s because we’ve only had the ability to transport ourselves halfway around the world for the last 60 years since the advent of commercial jet airliners. In any case, I was exhausted on arrival but I was already experiencing a travel high, a sort of buzz I get when I’m on the other side of the world. I knew I needed sleep, but I couldn’t wait to wake up in the morning and get out there to take pictures. 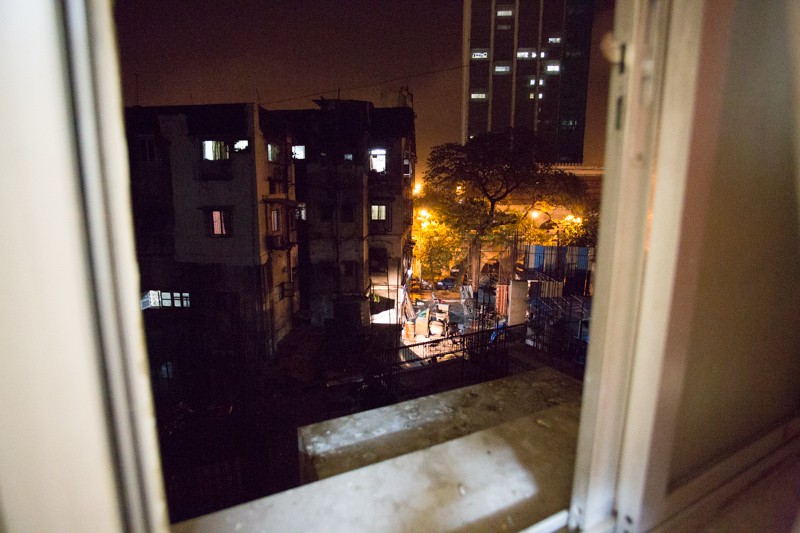 View from my hotel in Mumbai, India

I like to take my time and enjoy the process when I take pictures. I am not so much into quick snapshots; I prefer to think through my photography even if it means walking away with only a couple nice pictures instead of hundreds of boring snaps. The key question is — what makes a good photograph?

I look for things that are hard to notice at first, and I am constantly asking myself “what is unique about this spot,” and “what visual elements can I combine to make a nice photograph here?” Even when I visit popular tourist spots like Mumbai’s often photographed Gateway of India, I try to visit in off hours or photograph the scene in an original way. 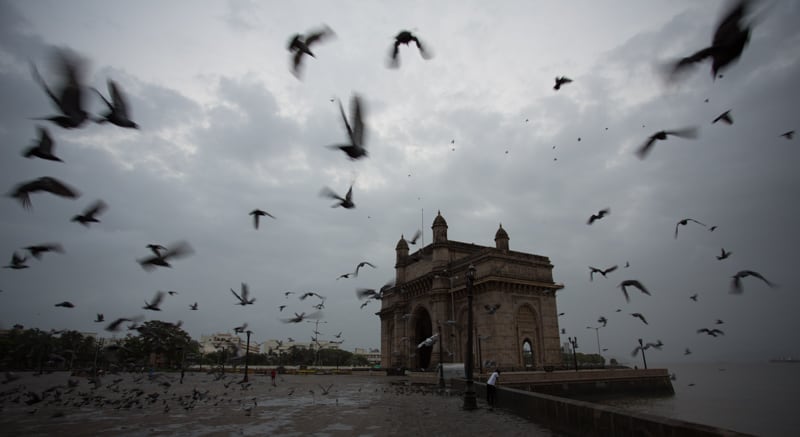 Light and color are important to me, so I try to seek out those things. It was monsoon season when I visited and the sky was a dull, cloudy grey for most of my time there. This forced me to look for color and light elsewhere, like in the shops and in the clothing of the people. 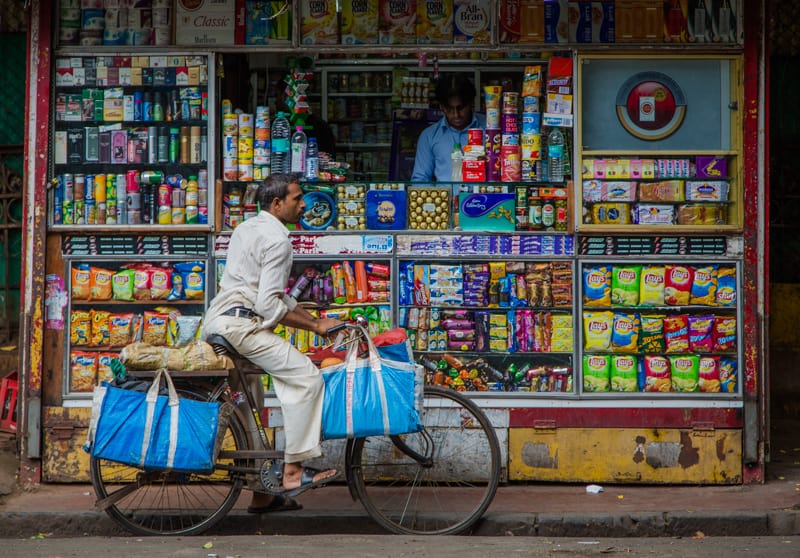 I also like to make framing decisions – should I show the entire location but sacrifice the details that show how immense a place is? 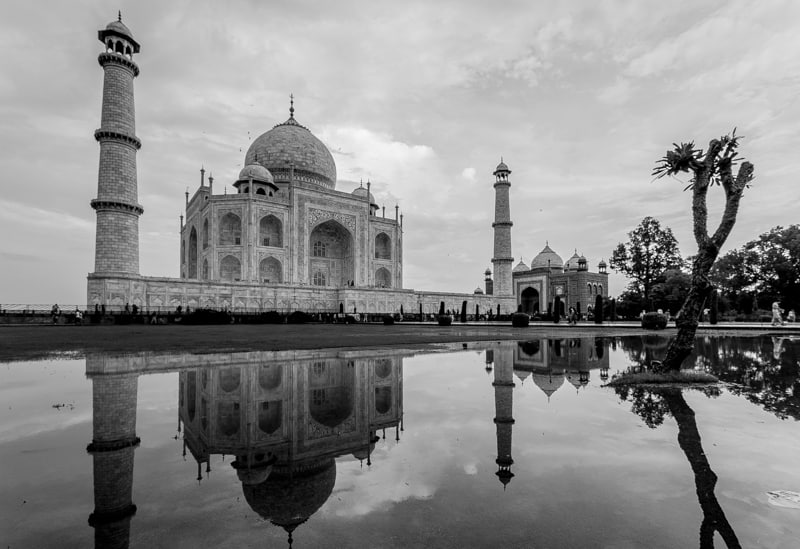 Or should I focus in on the details to show the scale of the place, but risk losing the overall context of the picture? Some viewers may not know this is the Taj Mahal unless it was mentioned in the caption. 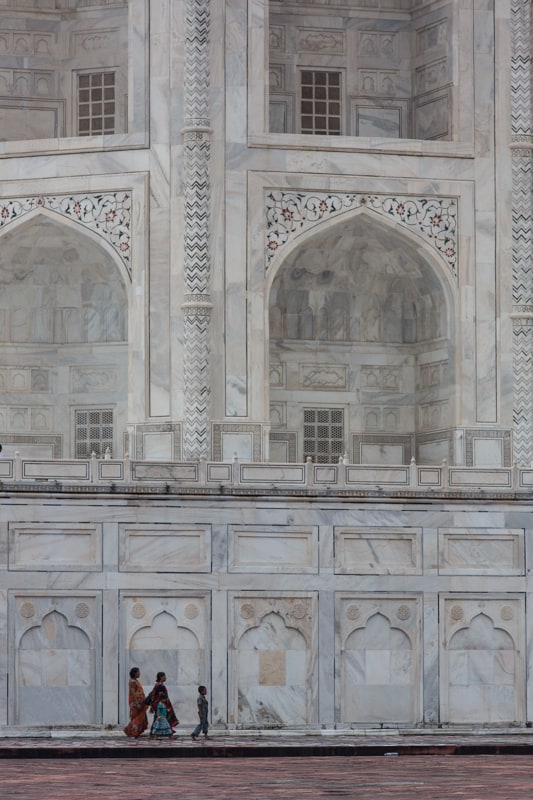 I also try to look for motion because the camera records motion over time, showing us things we can never see with our own eyes. 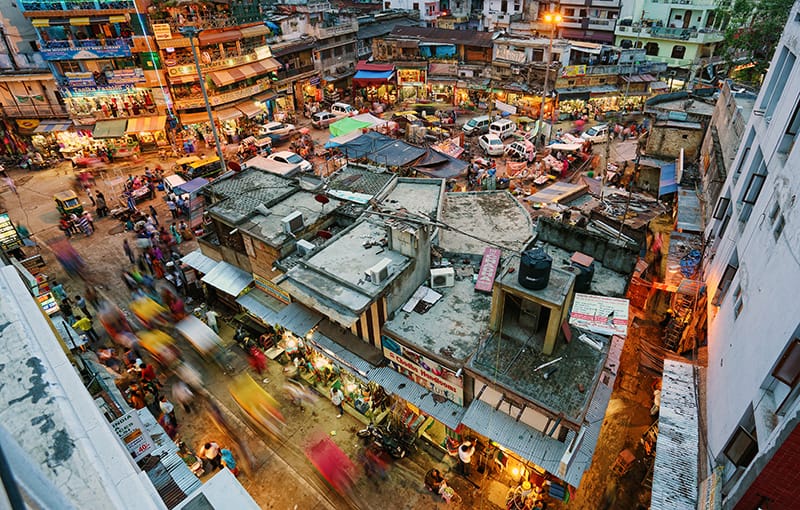 I try to combine as many of these elements as I can and put them together in as visually elegant a way possible. Maybe a better way of describing this is to say that I like to keep things simple. I like to achieve one single idea or point of focus in my pictures. I also try to keep the frame free of clutter and other distracting elements which don’t support the main idea.

This is just what I do, and what works for me. I’m always fascinated that two photographers can shoot the same exact scene at the same time yet come away with completely different pictures. It’s all about the choices made by the individual. That’s why I love seeing other peoples’ pictures from places I’ve visited, and why online photo communities like Your Shot are so important to photography as a whole.

How I got the shot

When I went to Jaipur in northern India I tried to keep my eyes open to find photo opportunities. The monsoon sky was grey again and the daytime colors were dull, but I knew that the sky would turn a deep blue and the city lights would come on later. I snapped a few frames of Hawa Mahal and I immediately knew I wanted to return later in the day. 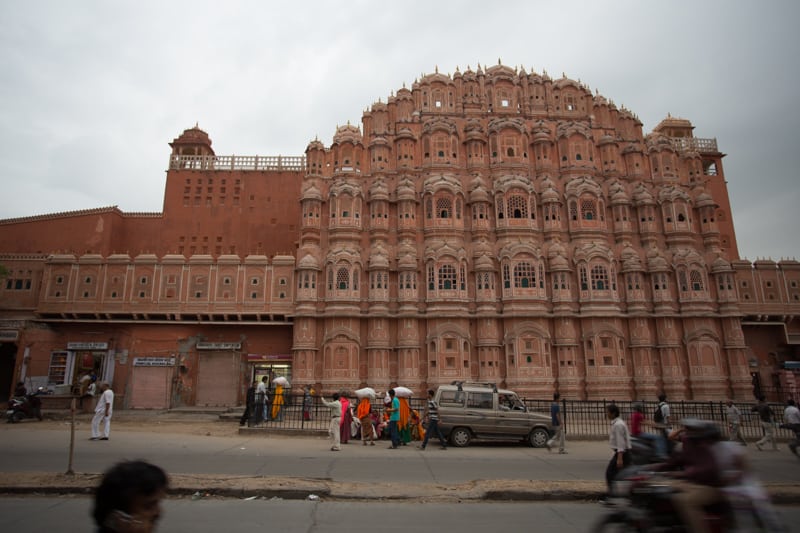 As night fell and I arrived on scene, a brief shower occurred which created some beautiful reflections on the street. I took a couple of test shots to figure out what would work best. I always take test shots during this process and I love this part of photography – knowing that I’m on to something potentially good and trying to figure out the best way to go about it. 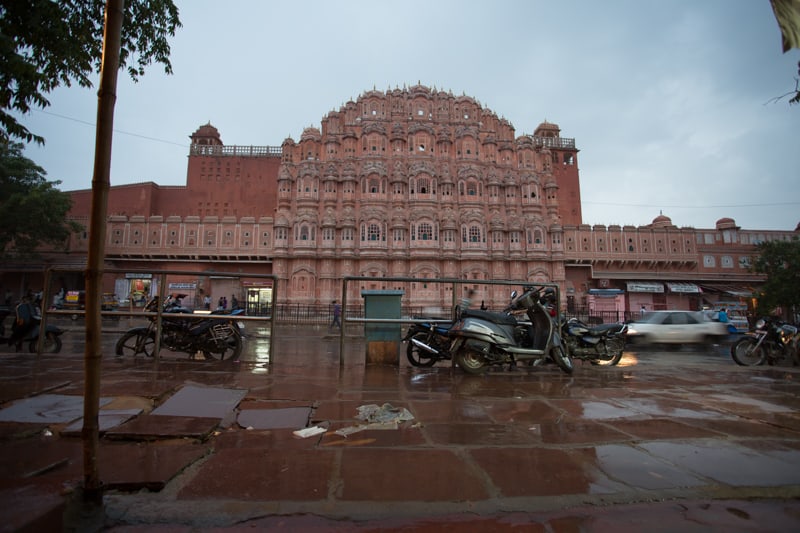 After it rained at Hawa Mahal

I realized the best way to capture the scene was to embrace the constant motion around me. A panning shot would work best, I decided, so I set shutter priority and a longer shutter speed of 1/20th sec. Panning shots are difficult because you need to precisely follow the motion of your subject to avoid blur. Luck plays a big role. Considering how busy and cluttered the street was, I knew my chances were slim to get a visually elegant picture and be able to capture it without blurring the subject.

Camera autofocus systems aren’t so great with panning in low light because they can’t figure out where you want to focus your shot. There is also an unacceptable delay while the autofocus tries to hunt for the right focus, usually causing you to miss the moment entirely. It’s best to cut the autofocus out in these situations so I switched to manual and I sat and waited.

I travel for the love of travel, and if I didn’t own a camera I’d still want to go out and see the world. I’m also acutely aware that I might spend an entire evening trying to capture a picture only to have the photograph fail. So it’s important to me that the experience is enjoyable regardless of how my pictures come out. Sitting there watching people go by was a great travel experience in and of itself, and I was happy just to be there.

To my luck a group of four women, all perfectly aligned and beautifully dressed in colorful saris, walked in front of me and I snapped the shutter while panning. Seeing this event happen in front of me, I knew this was “the shot” that I wanted to get, and I could only hope that it came out on camera. I was on pins and needles as I zoomed into my LCD to check for sharpness; low and behold it was sharp! 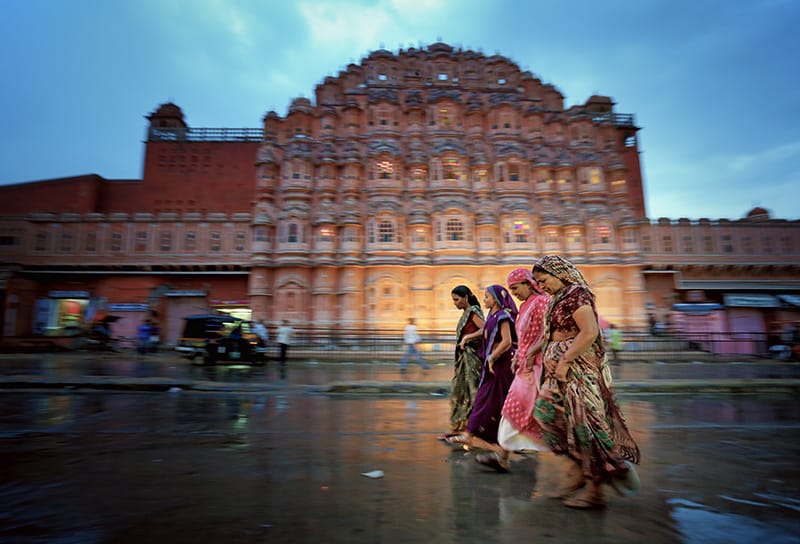 Even though I had the shot I wanted, I decided to stick around a while and see what other pictures might happen. As the day faded, ambient light dropped and the artificial lights caused the scene to look harsh and unbalanced. To my eye this imparted a menacing feel to the shots. I continued to snap away. 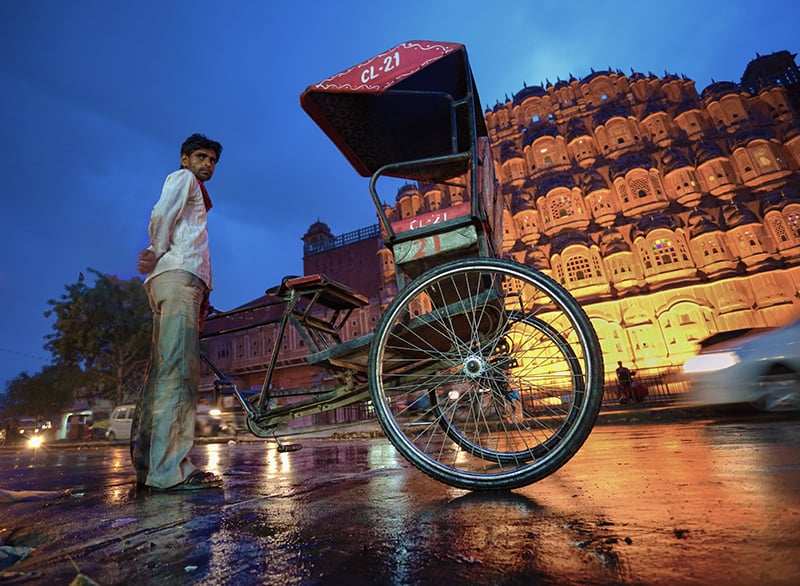 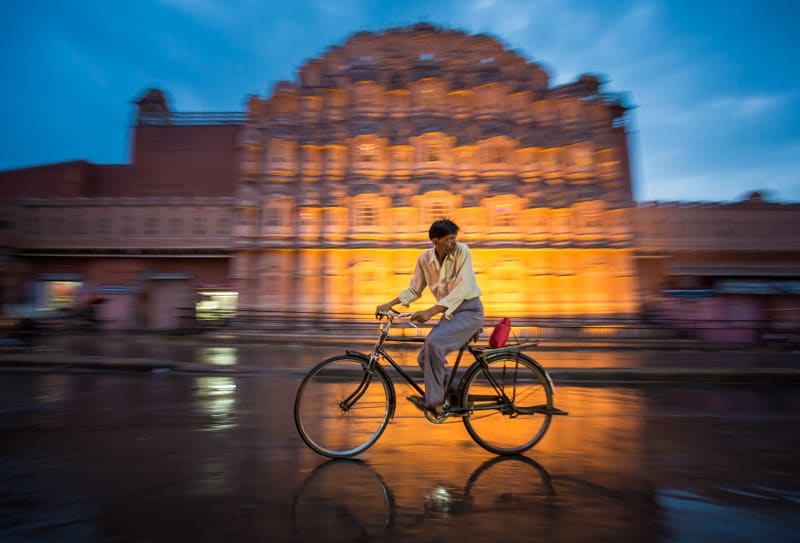 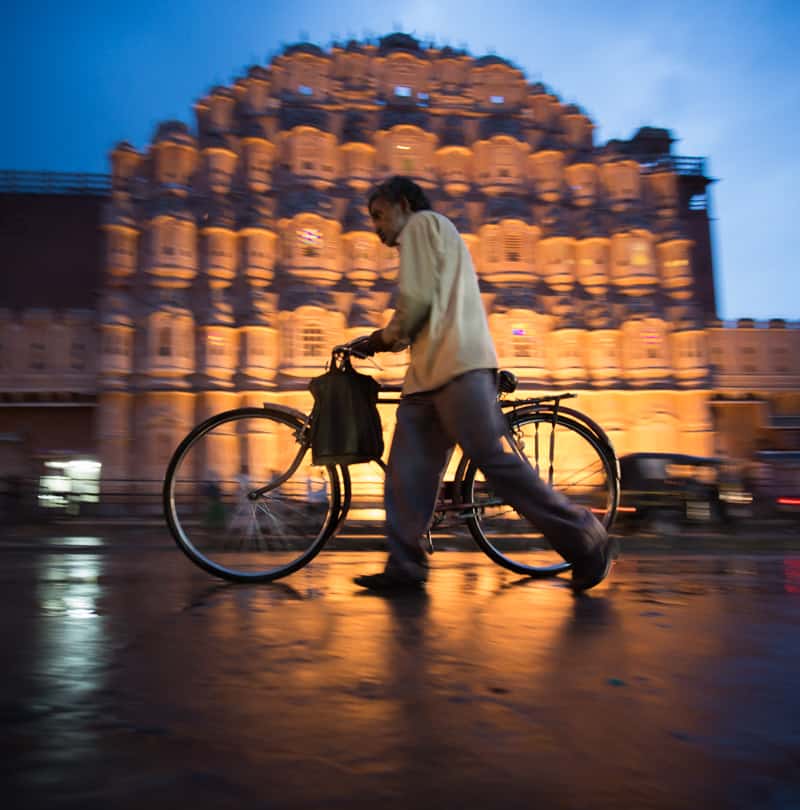 Three things I’ve learned since I took this picture

1. We are supposed to be our own worst critics. I’ve found this to be true until enough people see your work; at this point your critics become your worst critics! No matter what kind of art you produce, not everyone is going to like it. It’s important to shoot what YOU want to shoot, not what you think will be popular.

2. When it comes to editing, for me less is more. Photoshop is a nice tool, but even looking at my women in Jaipur shot I think it’s over saturated and too contrasty. When I shoot, I want to shoot for great pictures and not for great edits.

3. I share my work online today because I like to, not because I think it will bring me “exposure.” I have to care about it for it to work.

How to Capture the Travel Photos You Really Want