There has been a recent spate of travel writing about North Korea, once of the most secretive and brutally repressive countries in the world. I’ve found some of the stuff I have read unusually naive and glossy, but just ran across some welcomed developments casting always needed light, starting with the best piece of travel writing I have seen on it, by Google Executive Chairman Eric Schmidt’s daughter Sophie.

Undoubtedly, North Korea has one of the most reprehensible governments in the world and has to be on everyone’s bottom five “Countries I’d Like to Live in” list.

This is a country that occasionally just randomly bombs South Korea, has announced a plan to target the US with nuclear weapons, has run the economy into the ground to such an extent that hundreds of thousands have died of starvation, has cut its citizens off completely from the world with no access to the internet and with the least free press in the world, and has imprisoned some 150,000 to 200,000 of its citizens in prison camps, or gulags, that rival the worst the old Soviet Union had in its heyday.

And newly casting light onto North Korean misery comes Google, of all things. 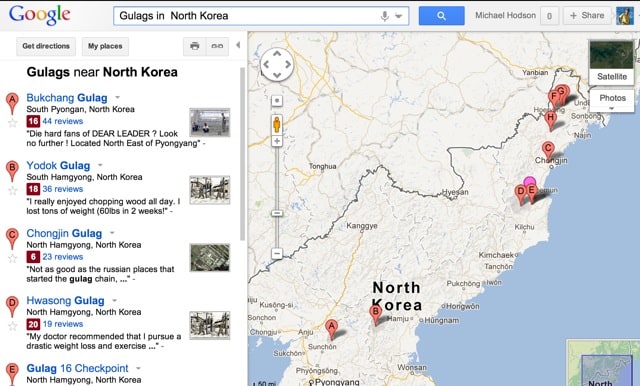 Until very recently, North Korea was one big blank area on Google Maps, but through a cooperation of volunteer spotters and satellite imagery, they have recently started mapping this country for the rest of the world to see.

It is going to be an interesting and informative ongoing project. 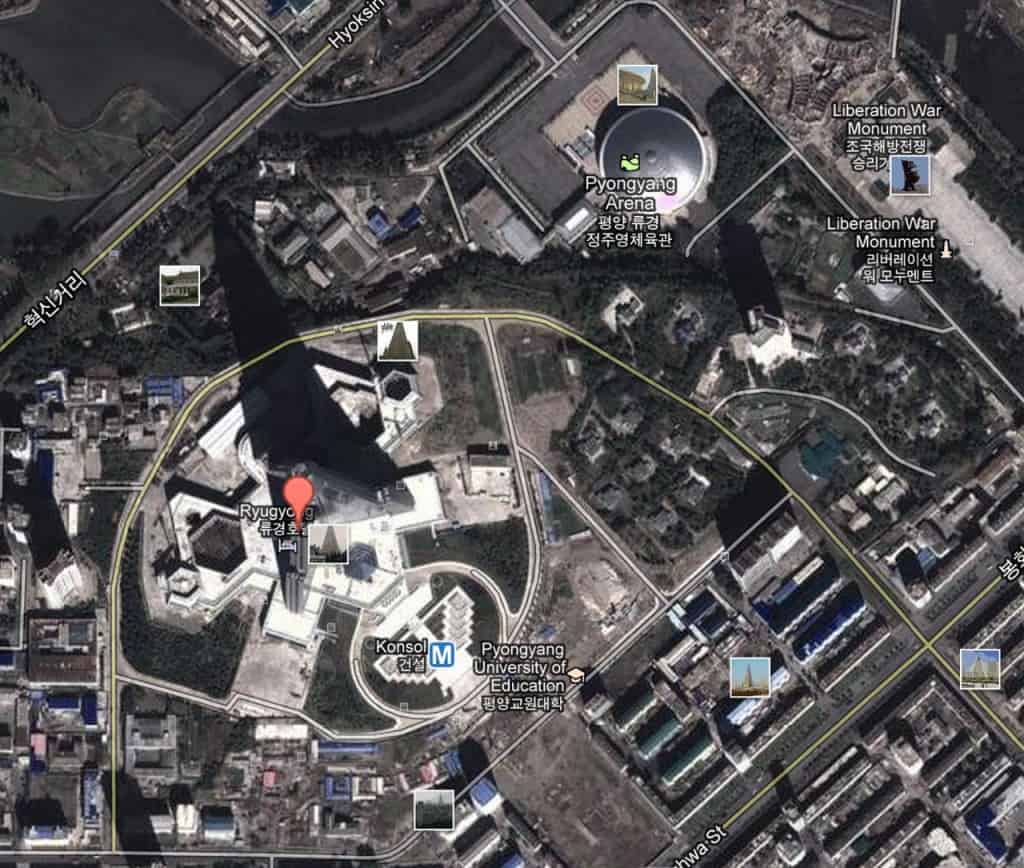 the shadow of the 105 story Ryugyong Hotel in Pyongyang

Aside from views of 105 story tall buildings that North Korea hasn’t finished yet (though they say they will complete, 25 years in the making), some of the most interesting details are the views of the North Korean prison camps.

What is interesting is that Google hasn’t shied away from labeling the gulags as gulags — no obscuring the truth that they are just plain and simple political prison camps, run by one of the worst dictatorships on the planet (little improvement since Kim Jong Il’s death graced my 2011 year end review). 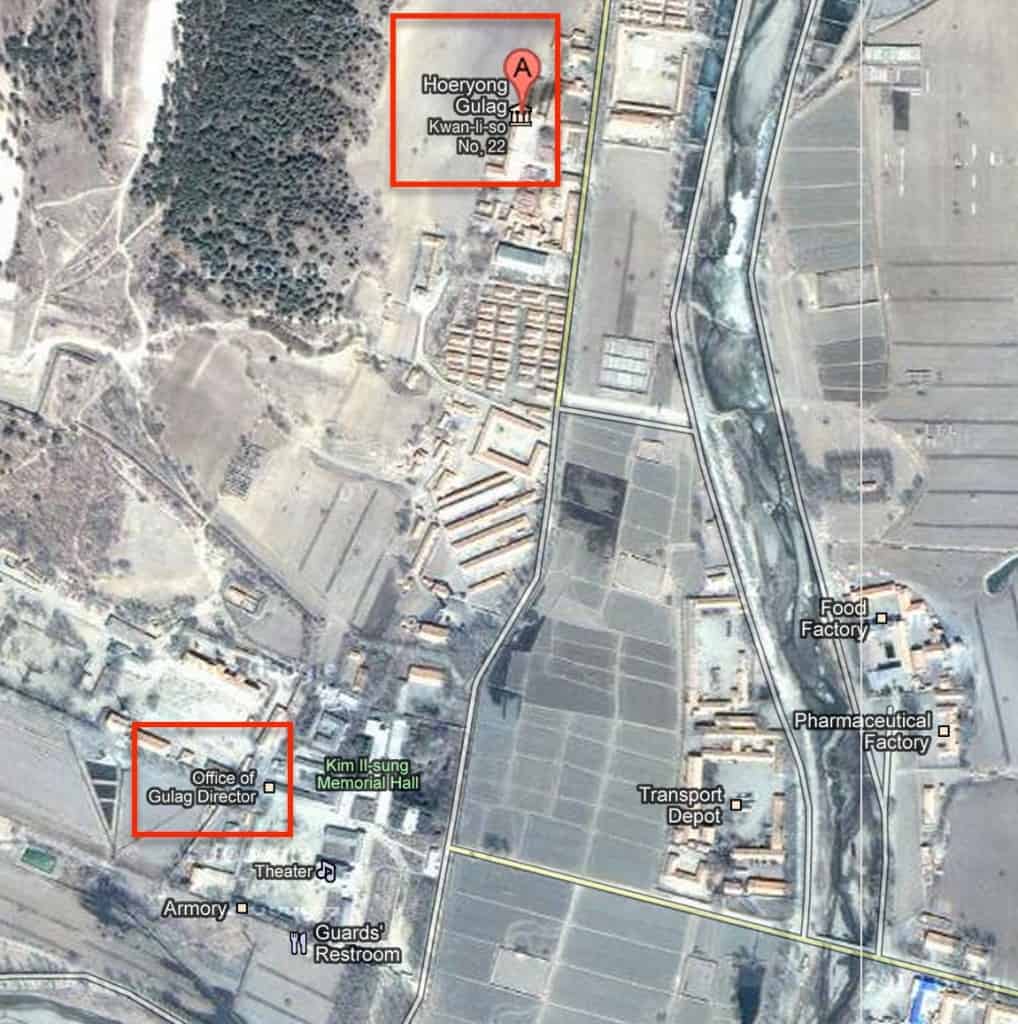 But all is not gloomy, depressing and dreary about this. Once these spots were put up on Google Maps, what did people start doing immediately??

Reviewing them. And some of the reviews are great. A sampling:

Probably the best checkpoint I’ve ever been frisked at, ever (and I’ve been to Juarez, Mexico, DR Congo and Syria in the past month alone). Definitely worth the wait to feel the supple hands of Private Park, the best frisker in the entire Korean People’s Army. Whether you’re headed for Hwasong or Chongjin, be sure to make Gulag 16 Checkpoint part of your trip to the DPRK!

I wanted to give resort an “Excellent” rating but the checkout process was really difficult. This of course isn’t the fault of the Glorious Leader, in fact, it’s probably all my fault. Please forget I said anything…

Not as good as the russian places that started the gulag chain, you can feel that they do not give attention to detail as the russians do. They need to do more cross training of facility employees to assure the same level of service.

Very misleading! The travel brochure said it was the resort that James Bond spent 14 months in in Die Another Day, but it wasn’t! Furthermore, the pictures of the “fitness” room and the “pool” (really a sewage vat) were photographed from a very deceptive angle! None of the attendants spoke English, and my wife developed a terrible infection. We think someone died in the room next to ours, but the staff seemed not to care. In a positive, they had Wayne Newton as the gulag entertainment. One star.

“Congratulations – You Are Now The Mayor of Bukchang Gulag” I’ve never been more proud of a Foursquare badge.

A little off the beaten path…. Well worth the the time spent on travel. Hosts treated me as equal, no special treatment. Great cultural experience! !!! Biggest complaint was no TV nor was there any power if TV was available. Great showers!!
A Google User reviewed in the last week — Quality Good

This prison camp is offensive to every civilized person, a place of unbelievable hardship and inhumanity. On the plus side, it has a very small carbon footprint and pretty much everything is recycled. So a mixed grade: 0 for friendliness to humans, but 10 for friendliness to the environment.

Thank goodness for a sense of humor in the face of evil.

Planning Your Trip To South Korea

11 thoughts on “A friendly guide to North Korean gulags”