As the ferry pulled out of Horseshoe Bay in a thick shroud of fog I knew we were close to what I had been looking forward to for a year. Heading to Vancouver Island is always special for me because of its unique vibe, beautiful scenery and phenomenal fishing. The fresh ocean breezes and lush forests are similar to no other in the country and rivers like the Stamp, Little and Big Qualicum, Englishman or Cowichan (to name a few) are what fly fishermen’s dreams are made of, magical. With runs of Pink, Chinook, Coho and Chum salmon spread across the season mixed with incredible resident trout and steelhead invasions, it’s enough to make me sleep in my waders so I can be ready for the next day’s fishing. 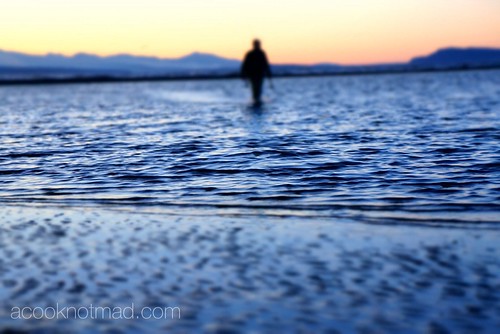 This trip out we were on vacation and ready to experience what this thriving part of the island has to offer. Our accommodations for the first part of our stay were confirmed at Ocean Trails Resort, a quiet and impeccably maintained condo resort nestled into the coastline of Parksville. Unloading the car, the wind blew through the cedars surrounding our condo and a profound relaxation came over both of us setting the mood for our stay. Our unit was a generous 2 bedroom, modernly decorated and fully equipped with a beautiful kitchen, B.B.Q. and fireplace. This was definitely not roughing it and we were not complaining. 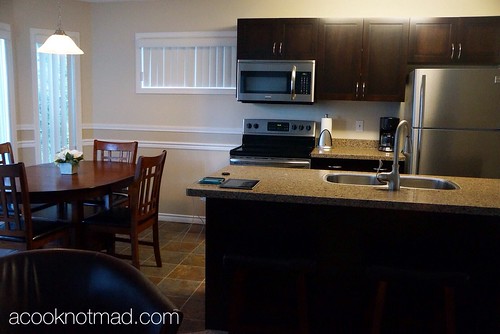 Fly fishermen can be serious gear heads and I would probably easily fall into that category. I have always felt that good equipment helps you be a better fisherman and enjoy your time on the water more. Casting better, playing fish more easily and being comfortable is the name of the game when you want to catch fish and long days on the river are inevitable. On this trip I was more than excited to be able to test out some new gear by Redington. Redington has become synonymous with well-priced quality fly-fishing equipment and continues to break ground with affordable performance fly rods and reels. 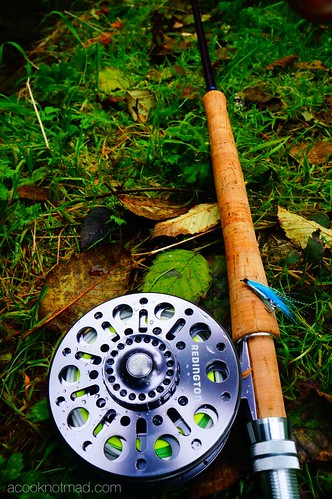 Knowing that we were going to be facing some hard hitting chum and Coho salmon I chose the Dually, an 8 weight 11 ft 9 in switch rod, so I knew that we would have enough back bone to turn those brutes to the shore. The Delta 9/10 reel filled with RIO’s new Switch Chucker line and a section of t10 sinking tip with a leader of 10 lbs Maxima rounded out the whole package. 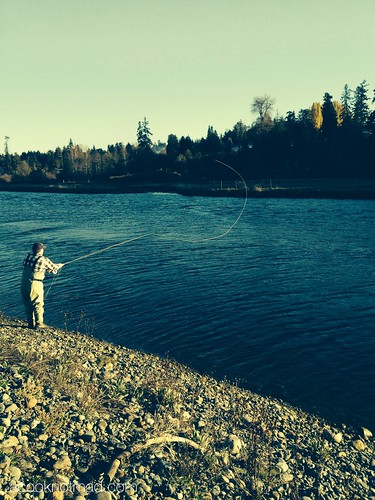 A switch rod is a fly rod that allows you to switch between regular over head fly casting, with a back cast, to spey casting which does not require any room behind you, with most of the cast done in front of the angler. This is the best way to fish rivers, with heavily treed banks and lots of obstructions, and my preferred method of fly fishing; since spey casting usually requires using two hands which cuts casting fatigue in half and also seems to allow you to hone your cast like a golfer would with his swing. As for the flies I tied up for this trip, the key is to have patterns you have faith in catching fish with and have lots of them. I tied up an easy 100 for us to use for this trip because I knew the big chum would go through them and hopefully a few huge Coho too.

After a cup of coffee and outfitting Nat for the first time in her waders and boots we hit the road. Twenty minutes later we arrived at one of my favorite rivers, the Little Qualicum, where we pulled over at the bridge and walked to the pool for a look. The pool had a fair number of fish in it but a look down river, where nobody was fishing, showed huge schools and jumping fish slowly moving up river. Nat and I quickly strung up the Dually, tied on my go to fly and headed toward the fish. Just passed the bridge, we waded out to our knees and I showed Nat how to cast a basic roll cast (did I mention she has never fly fished before?). The Rio chucker is great because the casting head and running line change color so you can work with just the right amount of line to cast easily.

Nat nervously attempted a cast or two and then I tried to correct her while she held the rod. Like magic with just a few pointers she rolled out a perfect cast that plopped on the far side. “Let that one drift”. I said, and within about 10 feet the line stopped and then the rod bent heavily. “I think I have a fish…” she said and at the same moment a bright silver Coho cartwheeled out of the water in front of her, “Hold on!”, I shouted, as the fish rocketed down river about 60 yards, breaking the surface a couple of times and then made another somersaulting leap where it tossed the hook. Possibly a thirty second fight, but that’s all it took to imprint what Vancouver Island fishing is all about and on her first fishable cast no less.

The next day we headed out early to fish another part of the river I knew would be holding tons of fish. I set Nat up again running through a basic cast and strategy and then waded into a sunny section of river. The weight and size of the Dually rod was perfect for the river and Nat was soon effortlessly dropping the fly across river and drifting it nicely. Within minutes we were into fish, Chum salmon this time and lots of them! Nat locked into a silver female chum and had a wonderful fight that ended in her tailing her first salmon. 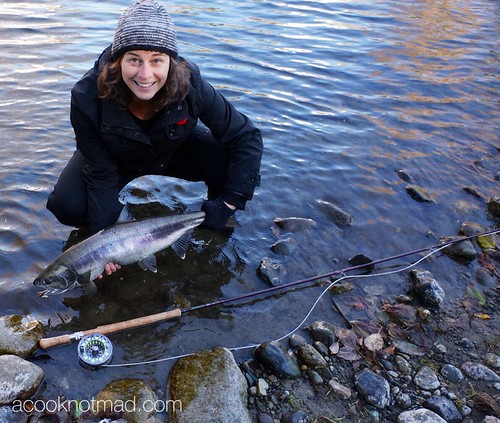 My turn now with the Redington gear and I was smitten with its cozy all cork grip and traditional good looks. Using a Delta reel on my big 14-foot rod I knew that I had plenty of power to stop a big fish and that’s just what it did. Three casts later I hooked into a big male chum that pulled like a Mack truck and took me for a great ride. For the rest of the day we hooked and played fish at will including a couple of beautiful Coho with never another angler within sight. 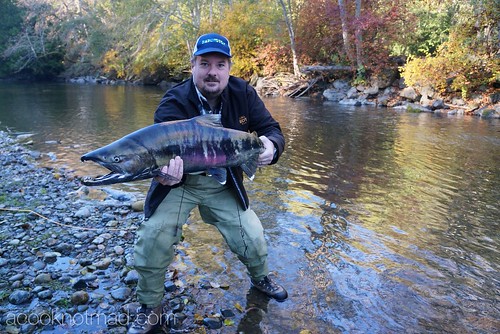 The Big Qualicum River was reported to be teaming with Coho so the following day we headed out a little farther from Ocean Trails Resort and parked at the Big Q hatchery, which is an incredible sight during the run with thousand of fish being channeled through the hatchery to view and observe. A quiet and beautiful walk up river we staked out a gorgeous pool and run and were again alone with not another angler around us all day.

This time the river was a little bigger and I could open up the Dually a bit more and cast farther. It was just fantastic to use and I could drop casts anywhere I wanted throughout the run. The gin clear water revealed lots of Coho holding at the back of the run so once Nat got her cast together again we slowly moved down. Nat went with a copper colored fly and it paid off because it got picked up by the one fish we kept, a beautiful Coho that took her all over the river before I tailed it onto the bank.

It was a day that any fisherman would have dreamt about and I was lucky enough to be able to share it, in all its glory, with my wonderful wife. One thing is for sure she will definitely fish with me more often and when she doesn’t she will understand why I am always late coming home from a day out on the river.

Want to see what we were doing when we weren’t out fishing? Check out our Facebook Page and Twitter feed.

Together for close to a quarter of a century, A Cook Not Mad‘s Tim and and Nat have indulged their passion for life and experience to the fullest, but they feel most alive when traveling, cooking and eating. An award winning chef, Tim has dedicated his life and career to cooking and the pursuit of honest food. As a professional photographer, Nat records their adventures with incredible pictures of everyday life and the extraordinary. They believe that everyone should get to know a culture by learning about the foods they eat and living like locals as much as they can.

Another fall in Parksville-Qualicum Beach

Great places to eat in Vancouver

How to beat the winter blues in Beautiful British Columbia