I was having a conversation recently about the best concerts we had seen. And I recalled this was an occasional subject of conversation while traveling — along with “what was your first concert?” And that can lead to some interesting and amusing answers.

Though I might edit this list if I think of any others that I can’t recall now, these are my favorite 5 concerts that I’ve attended: 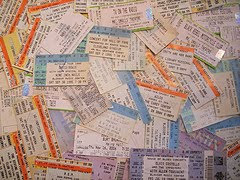 1 — Simon and Garfunkel (1983). Also my first concert. I was late to an appreciation of music. I didn’t buy my first album (actually a cassette tape) until I was a sophomore in high school. Simon and Garfunkel did a series of reunion concerts in the mid-80s and my first concert was seeing them outside Washington D.C. Then my second concert was seeing them two days later Dallas. Pretty good start to my concert lifetime.

2 — Pink Floyd (1988). Another reunion tour, but this time without one of the two major forces behind the band, Roger Waters. He and David Gilmour apparently despise each other with the burning passion of the sun. Didn’t inhibit the excellence of the show in Austin.

3 — U2 (1985). I’ve seen U2 twice. The first time was back on their Unforgettable Fire tour in Dallas and then saw them much later on their Pop tour in 1997 in Seattle. The first show was the more memorable (The Edge had to sing a bunch of songs in the later tour because Bono’s voice was a little blown out) and especially memorable for me because of one of Bono’s comments between songs. 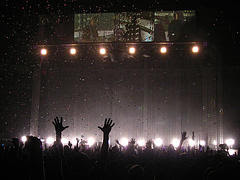 They had just hit it big time with this album, and were set to be one of the big bands at Live Aid later that year. Bono joked mid-concert to the sell out crowd, “where were all you fans when we played to a half empty show at Billy Bob’s two years ago?”

4 — Eric Clapton (2005). This was a concert tour that got very, very mixed reviews from my friends. I had a number of friends that hated it. I flew out to San Francisco and saw them him out there. I think the main reason that some hated this concert, including about half of the audience that I saw it with, was that they didn’t know what Clapton was up to. The first half of the concert was old school blues covers of guys like Robert Johnson and others from decades long gone by. A good number of people around me kept asking: “is that a Clapton song?” Then in the second half of the show, he came out and played pretty much every single one of his greatest hits. I hate it when legends come out and only play a few of their classic songs, and instead play a bunch of songs off their latest album. Frankly, most times the most recent stuff isn’t that great — we came to see you play your time-tested stuff. Clapton did just that. For about two hours.

5 — Big Head Todd and the Monsters (2008). Went to see them at Red Rocks before I took off on my trip. I really enjoy everything they’ve done and they put on a hell of a live show. The lead singer’s voice is so damn velvety smooth and is a perfect bluesy/rock base voice. Great band and makes the top 5 also because of the venue. Red Rocks is one of the best places to see a concert in the world. Amazing.

I would LOVE to see other’s lists of their favorite shows of all time. Thanks!

Back to one of my favorite countries. Which one, you ask?