Skip to content
Home » Blog » Headed to Grenada in the Caribbean

As you read this, I am in route from Bogota, Colombia to St. George’s on the island of Grenada. This whole trip came together on Sunday, October 24th and five days later, I am on a couple planes (yes, I feel like a traitor to my overland travel roots) to bask in some island sunshine.

This whole thing came about as a bit of a lark. Last Saturday, my favorite baseball team, the Texas Rangers, won the American League Championship Series and advanced to play in their first ever World Series. I sent out a couple emails to friends in Dallas to see if I could get a ticket for one of the games there, thinking that I could get a cheap flight back to Florida and then over to Texas on Southwest Air. Pretty quickly, I realized that little travel plan wasn’t going to come to pass — no one is going to give up their World Series ticket. But the movement bug had bit me. 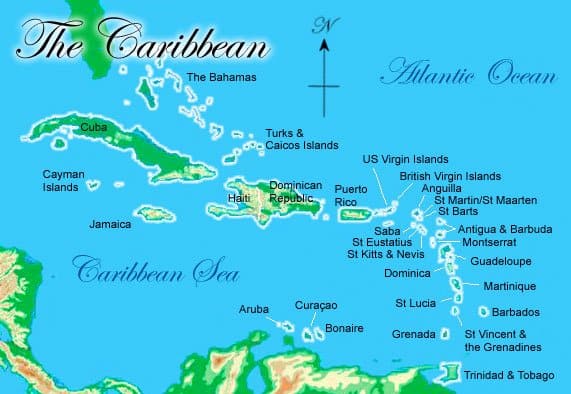 Grenada is in the lower right, above Trinidad and Tobago

I did some research on how difficult it would be to get to Guyana, Suriname, and French Guiana over on the other side of Venezuela. I don’t know anyone that had been to those three and I need to knock them out to finish South America (along with hitting Boliva and Paraguay in the future). But the difficulty and cost precluded that jaunt.

I then checked into some airfares from Bogota. Anything to the south (Peru, Argentina) was quite expensive. The Galapagos were actually doable, but then I remembered my folks might want to take a family trip there in 2011. I could hit Panama and see some places I hadn’t seen there and play some poker at casino I loved there, but didn’t feel the urge.

Then I remembered that my friend Wiley was living and working on the island of Grenada. I had talked to him before my trip down here about trying to get over to see him, but hadn’t ever worked through the logistics. After some quick checking, I figured out that I could fly there via Panama City and Port of Spain, Trinidad and Tobago (where I will be staying on the way back and also checking out) for a total of about $550. That isn’t really in my budget these days, so I half-jokingly sent and email to Wiley saying that “I might be able to come over, but it is a bit out of my budget — got a free couch I can crash on for a few weeks?”

The answer back about an hour later was better than that. 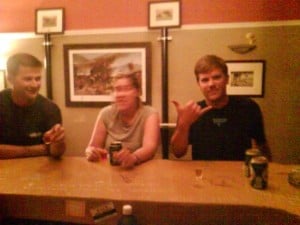 me on the left and Wiley on the right, at Big Blue

I met Wiley on my round-the-world (RTW) trip in April of last year in Cape Town. He was down there finishing up his sailing captain’s license training and staying at the hostel that I ended up at for a fun, drunken ten days — Big Blue Hostel. He is a truly great kid, and I am allowed to say kid because he was born the same year I graduated high school. I had a blast hanging out with him for a week in a half in that great hostel (in fact, I am going to have to get him drunk and get permission to include some of those stories in the book, come to think of it).

In any case, he got his captain’s license, moved back to the States for a bit, and then got a job working for a company that rents out sailboats in the Caribbean. He has quickly moved up to being in charge of their entire office in the West Indies. So when I asked if he had a place for me to crash, he replied with, “sure, it’s not busy right now, just crash on one of the yachts.”

Now THAT is some great couchsurfing. 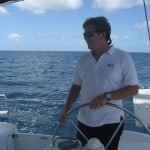 Wiley at the wheel

Additionally, he thinks he is going to have time for us to do some sailing up in St. Vincent & the Grenadines and maybe up to St. Lucia and Martinique, depending on his schedule. Plus, he has promised to help me try to finally figure out some of the sailing basics, since I have enjoyed every moment I have spent sailing and might just end up with a boat at some point in my life.

Pretty much an impossible opportunity to pass up. So I am heading up there for a month or so. I have booked a return ticket to Cartagena at the end of November. I really need to spend a few days taking photos there. I have to get from Grenada to Trinidad and Tobago to catch that flight back (via a small commuter airline), but that date isn’t set yet, so I will have some time to also explore that island country for a few days. Needless to say, I have a big smile on my face as I write this.

So has anyone been to Grenada or any of the islands in the lower West Indies, including Trinidad and Tobago? Any suggestions of things I need to do or see, besides drinking lots of rum drinks and smoking the Colombian cigars that I bought last week? Suggestions welcomed.

My good friend Matt Long with LandLopers just posted his Introduction to Grenada recently and its a great read. I finally made it and did my things to do in Grenada post. One of your options in this part of the world, of course, is to head down there for all inclusive holidays. I have to admit that I did one of these with a girlfriend some years back and was shocked that I actually liked it. One never knows, I guess…..

5 Great Things to Do in Grenada

19 thoughts on “Headed to Grenada in the Caribbean”