Far more often when I travel, I play the part of voyeur, rather than active participant. I simply enjoy watching life float past me while I am on the road. There is immense enjoyment for me from just watching things happen in strange places.  I definitely am more on to sit back and watch, more than participate.

Over breakfast a few weeks ago in Crown Point, Tobago, I was listening to the conversation of a table of four locals next to me. The only man was an older man that looked, and sounded, like he had immigrated from India at some point. He had a big, sweeping, bushy mustache and his English was a mix of proper British style English, that I imagined he learned in India, and more of the local creole dialect, which is damn difficult to understand at the speed they throw it out.

The three women at the table ranged in age from the one that seemed to be about the same age as the Indian gentleman, early 60s perhaps, and two others that were considerably younger, around 30 or so. They were all dressed in colorful patterned dresses, exactly the sort of thing you would imagine for the Caribbean.

I understood about two-thirds of what was said. Although the creole and local slang was lilting and a bit mesmerizing, when they waded heavily in that pool, I was unable to follow. What I did follow was the mundane chatter of the area.  Some gossip.  Plans for the day.  Things that were going on in the area.

I had been feeling a bit removed from the real world for days, as if watching a movie on a screen, instead of being involved at all.  The people at the table ended up engaging me in a bit of conversation about why I was there and what I had planned for the week, which helped snap me out of my passive state.  It was a nice wake-up. 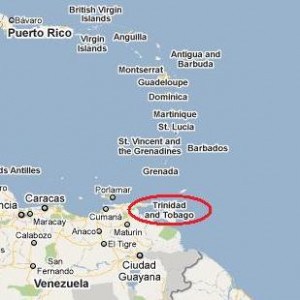 One thing I found odd about my time in Trinidad and Tobago is that I never heard anyone speak Spanish.  Trinidad is really, really close to Venezuela.  Under 20 miles of ocean lay between the two countries.  But even given that proximity, this former British colony remains all that and it seems that the South American influence is almost non-existent.

This restaurant lay between the local beach and an area where a lot of the tourists were staying.  Although I love the whole atmosphere of beach towns, there is something about tourists in a typical beach town that I almost invariably find amusing. Or tourists going to a beach town for that matter. 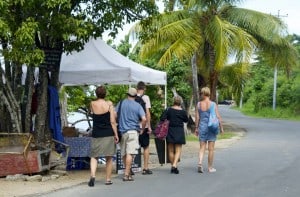 I have noticed this before at beach locations, but it really struck me this particular morning.  Sometimes it appears that the tourists walking to the beach, women in their floppy hats and men in their baseball caps, have more of a look of duty than that of any particular joy.  It has the appearance of ‘we are here, we have to go to the beach.’  Perhaps it is because I am not particularly a beach person, but sometimes they appear to be lemmings in my eyes.

I ended up walking down to the beach, getting a bottle of water and reading some of my book on one of the benches there.  I did get to see a Muslim woman wading in the shallows with her husband.  She had the full hijab garb on, from head to toe.  Her husband held her hands, as he tried to keep her upright as the waves crashed against here.  Perfectly odd image to finish my morning.