It was love at first sight. Pure bliss. A vacation from my vacation.

After taking several long bus rides throughout my three-week trip (up until San Pedro), including the 20 hour overnight bus it took to get there from Santiago, I arrived in Calama, Chile, in the early evening. I then took an hour-long taxi ride into the majestic town of San Pedro de Atacama, elevation 2440m. The sun was just setting over the open desert as the taxi driver cautiously drove down the small and long road. It was beautiful; peaceful.

I arrived at Tierra Atacama Hotel & Spa around 9:30pm, where I was immediately greeted by Yasu, the hotel’s Assistant Manager of Tours. He sat me down (as I later saw him do with all other arriving guests) and went over all the excursion options as part of the hotel’s all-inclusive program. He was mindful to the fact that I may not have been fully acclimated to the elevation yet, and suggested a low-impact excursion for the morning. I was hungry and tired, and he showed me to my room so that I would have time to refresh and still make the evening’s dinner.

My jaw dropped to the floor. My room! Clearly, this was a vacation from my vacation! I slept in noisy, sticky, and cramped hostels before this. I even couch surfed while in Montevideo and Buenos Aires (which were amazing experiences, don’t get me wrong). But this room, this king sized bed, this view! It was like I was on a honeymoon without a husband.

After dinner (which was amazing — I made “mmm” noises at every bite), I walked back to my room with my neck craned back the entire time as I gazed at the black blanket of the clearest sky with the brightest stars. Everything around me was calm and perfect.

I know it had only been less than two hours into my love affair with San Pedro de Atacama, but I believe I will forever remember this enamored feeling that came over me… in the shower! Yes folks, the shower. In the bathroom, there clearly was a shower. Not a fully enclosed shower, but nonetheless a very nice shower. Behind it I saw another door – wooden. I thought, another shower? No… maybe it’s a sauna. I opened the door and it was indeed another shower, enclosed with rock tile. I decided to use the mysterious shower. As I grabbed the soap, I felt a chill on my arm. I didn’t know why it was cold, and then I looked up. The sky! The deep blue sky and the bright stars. Honestly, I just don’t know how to describe how awesome it was to shower under the stars.

On my first excursion the next day, a small group of us loaded in a van and headed toward Valle de la Luna, making stops at Canyon of Ckari, the Dead Valley, and the Three Maries. The Three Maries are the result of intense erosion processes and are composed of clay, gravel, salt, gems and quartz. They are approximately one million years old. The tour guide mentioned that they are now “two and a half” Maries because a tourist broke half of one! What a shame. 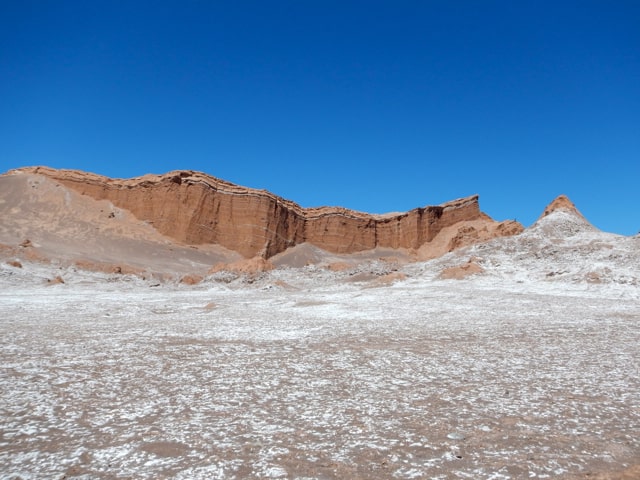 Overall, I really enjoyed the landscape between desert and salt. It is very different from anything I have seen. Dry and sandy, yet white and lusty. Living in San Diego for the past 10 years, beaches are my backyard. The desert is refreshing, surreal, and so much cooler than a beach!

After our trip to Moon Valley, I ate a delicious lunch, and then decided to lounge around the spa area. The outside pool literally has the most gorgeous view. The hotel is surrounded by beautiful land with a view of the Andes Mountains and a postcard-worthy snapshot of the Lincancabur volcano (all the rooms also have this view). No other hotel in the area has this special scenery or feel. The hotel is literally inserted in the middle of nature, making you feel a part of the desert oasis, not just a spectator. The spa facilities add a nice balance in the hotel between adventure and relaxation. 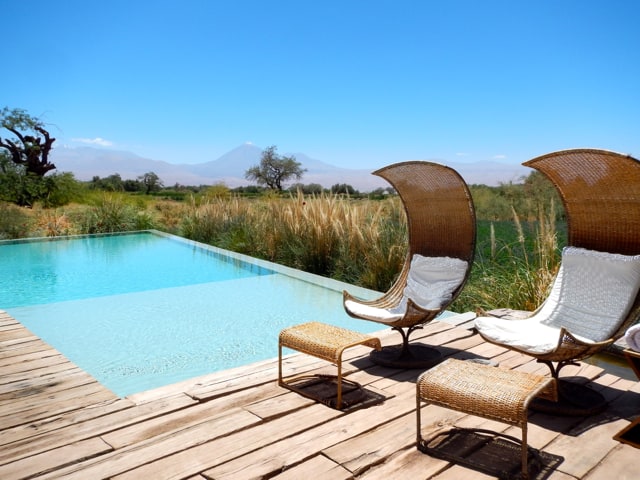 After my spa relaxation, I suited up and took a bike ride (with a guide) to Cejar Lagoon. When I was planning my trip, I read about the Atacama Desert and the lagoon that is so dense with salt it allows you to float. Truthfully, this is the primary reason why I decided to journey to San Pedro — I wanted to float in the Lagoon! 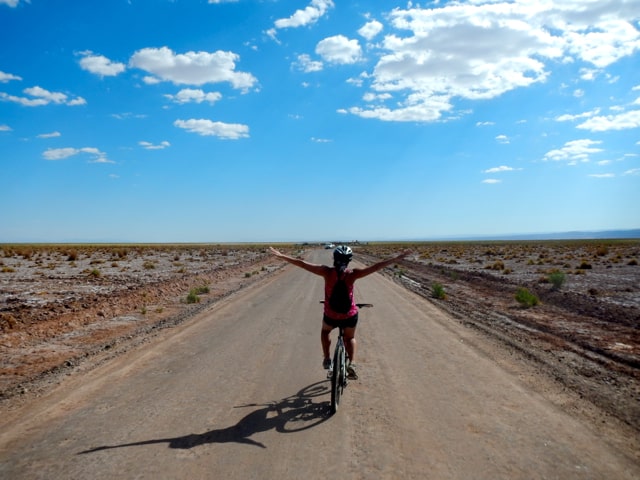 After an 18k bike ride, a nice dip in the water was perfect. Later, three sisters who had been on my morning excursion joined the group, and I had such a great time with them! We all laughed as they slowly experienced the chill of the water and the sensation of floating. I was truly in good company. A nice cold beer and raw salmon and cream cheese sandwich topped off such a fun day. 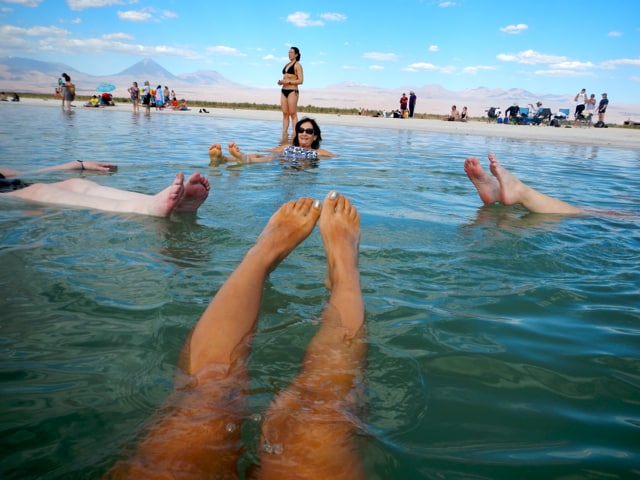 One more day at the hotel, one last excursion. I opted out of stargazing the night before but only because I wanted to get rested for my 5am morning with the Tatio Geysers! The Tatio Geisers are located at an altitude of 4300m (14,190 ft). It was a long and bumpy ride the entire way. And guess what… this California-girl-turned-Paraguayan does NOT plan well for cold weather. Once we got near the geysers, I stepped out of the van and brrrr! I had yoga pants on that exposed my calves and ankles, a light hoodie, and a very thin travel rain jacket. Good thing I at least had socks on! 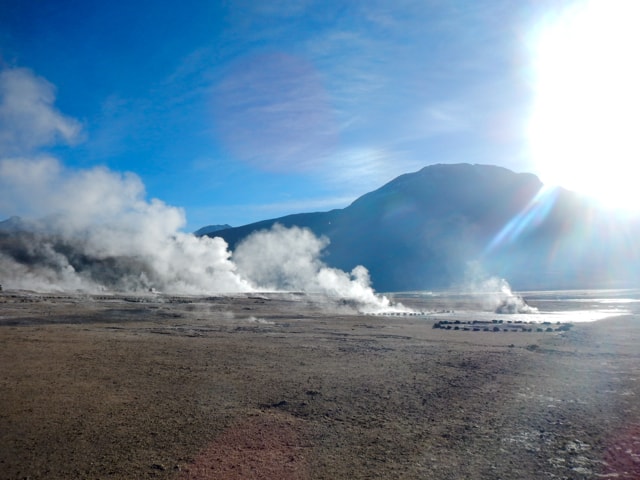 The geysers where simply incredible. My Spanish teacher in Santiago insisted I visited the Tatio Geysers, as did the taxi driver to the bus terminal. The bailing on the stargazing, the 4am wakeup call, the numb ankles – all worth the beauty and wonder of the geothermal field. I couldn’t take enough pictures and the pictures just do not do the place justice.

Unfortunately, soon after I got a small bout of altitude sickness. I just finished the great breakfast that was provided, where I made an avocado sandwich to go along with the other treats. I drank hot chocolate that was warmed up from a geyser (so cool!). Then it hit me: I felt light headed and sick to my stomach. Oh no! I quietly made my way to the back of the van where I sat on the ledge. I removed the scarf I was borrowing and tied up my hair, preparing for the worst. The guide gave me some sugar to dissolve under my tongue. I felt pretty woozy for a good 20 minutes. The sugar must have really helped, though, because luckily I started to feel better. I heard that it is common to get altitude sickness after eating if you are not fully acclimated. Rest, staring at the ground, sugar, and slow movements seemed to help clear up my case. And then I continued to enjoy the rest of my beautiful day. 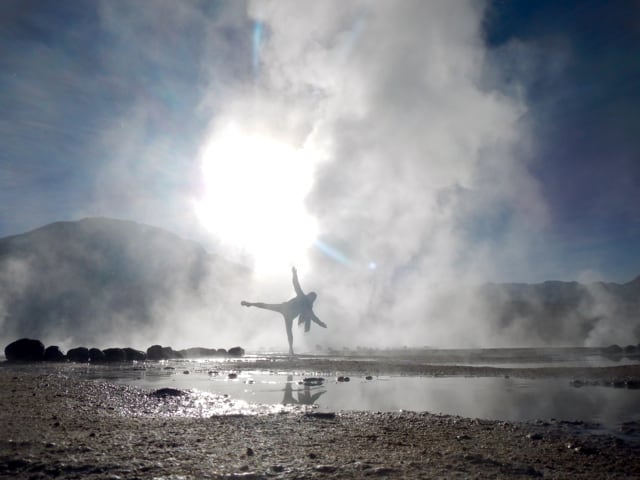 Seeing as the hotel is located in the desert (not to mention the driest desert in the world), sustainability is very important to Tierra Atacama Hotel. The hotel has invested in a treatment plant to help recycle and reuse water. Recyclables are separated from trash and once or twice a month a truck from nearby Calama comes to collect it – other hotels have even joined in on the process. Tierra Atacama Hotel is the only hotel with solar panels. Half of the hotel’s energy comes directly from the panels. There is even a small plantation of vegetables such as asparagus and green beans. You are literally in a desert oasis when you visit this hotel.

I realized something special during this trip: The Andes Mountain Range is my favorite place in the world. I’ve been to beaches and islands, modern and ancient cities, deserts and wetlands. I’ve experienced the Andes several times in Colombia, Ecuador, Peru and now Chile. Every time, I feel like I fall in love for the first time. And now the Atacama Desert, just west of the Andes, has given me an experience beyond words, an incredible feeling of love within. Silly to think that such a short trip could make me feel this way, but that is the beauty of seeing the world… you never know what to expect. You just might fall in love — with mountains. 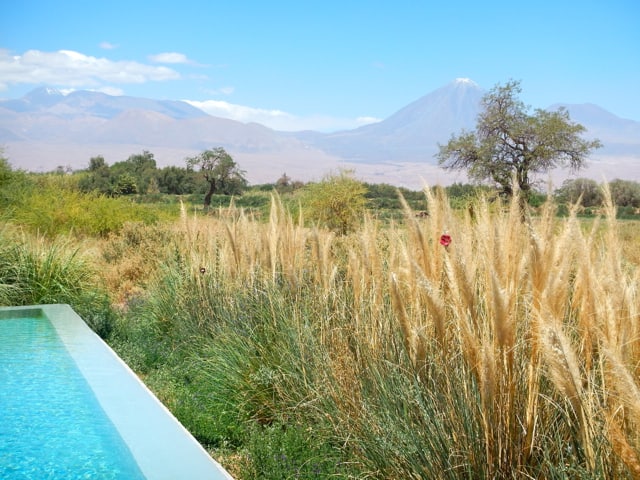 Briana Colorado is currently living in Asuncion, Paraguay, where she is a high school counselor at an international school. During her summer vacation this school year, she traveled to Uruguay, Argentina, and Chile. Her next stop in South America is to the Bolivian Salt Flats this coming Semana Santa. Briana enjoys adventure travel and running (literally) around different places! She was given a free stay at San Pedro de Atacama, but her opinions of the experience are entirely her own.

My top 6 spa experiences around the world

11 thoughts on “San Pedro de Atacama: A vacation from my vacation”