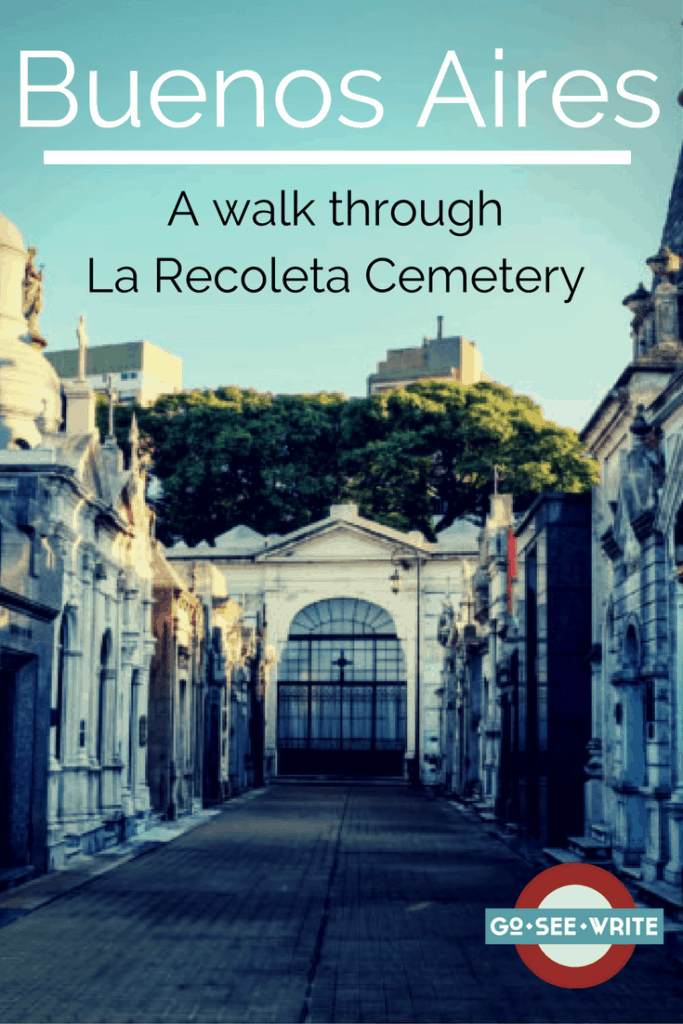 As I entered the gates of La Recoleta Cemetery, it was as if I was walking through a smaller city within central Buenos Aires. I realized immediately that this is not your average cemetery, at least not one that I’d ever visited.

Who visits cemeteries as tourist attractions, anyway? I don’t like thinking of it as that. In Buenos Aires, La Recoleta Cemetery is a known place to see for its sheer size and overwhelmingly beautiful architecture. Argentinians also visit the cemetery because it is the resting place of many old presidents, famous writers, poets, and politicians. It also houses the tomb of one of the country’s most beloved icons: Eva Perón, the former first lady of Argentina. 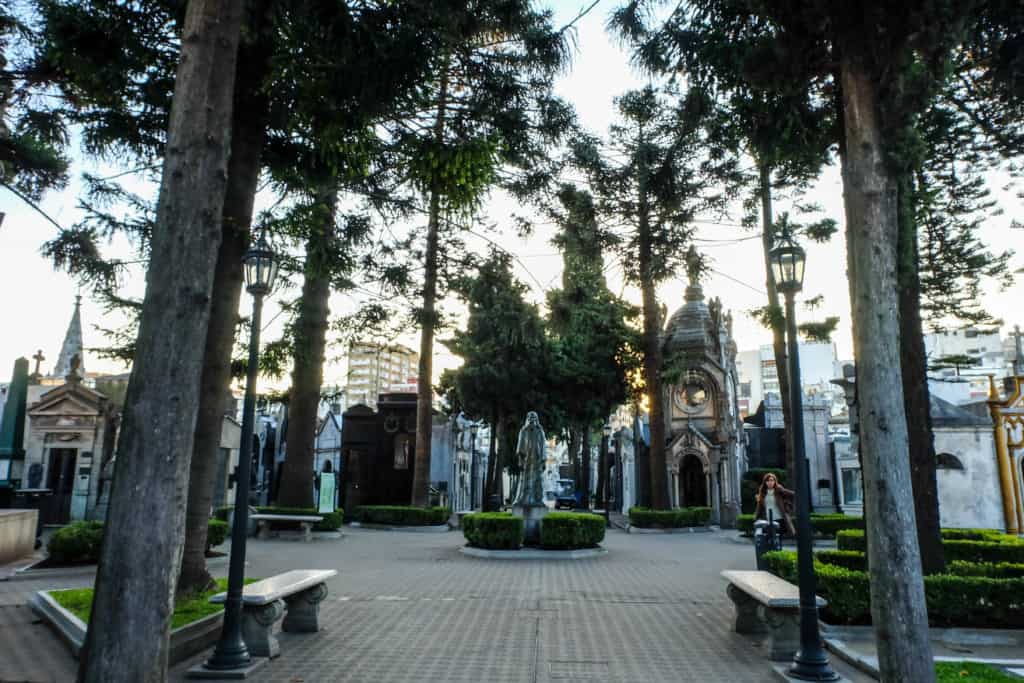 La Recoleta Cemetery, named after the neighborhood in Buenos Aires, is like a city in itself. Containing almost 5,000 above ground vaults, the cemetery’s mausoleums towered above me as I walked through, swiveling my head from side to side like a bobble-head doll.

I didn’t visit this cemetery once but I went three times: during my first visit to Buenos Aires four years ago and twice dragging friends along, this year convincing them it was a place they had to see. 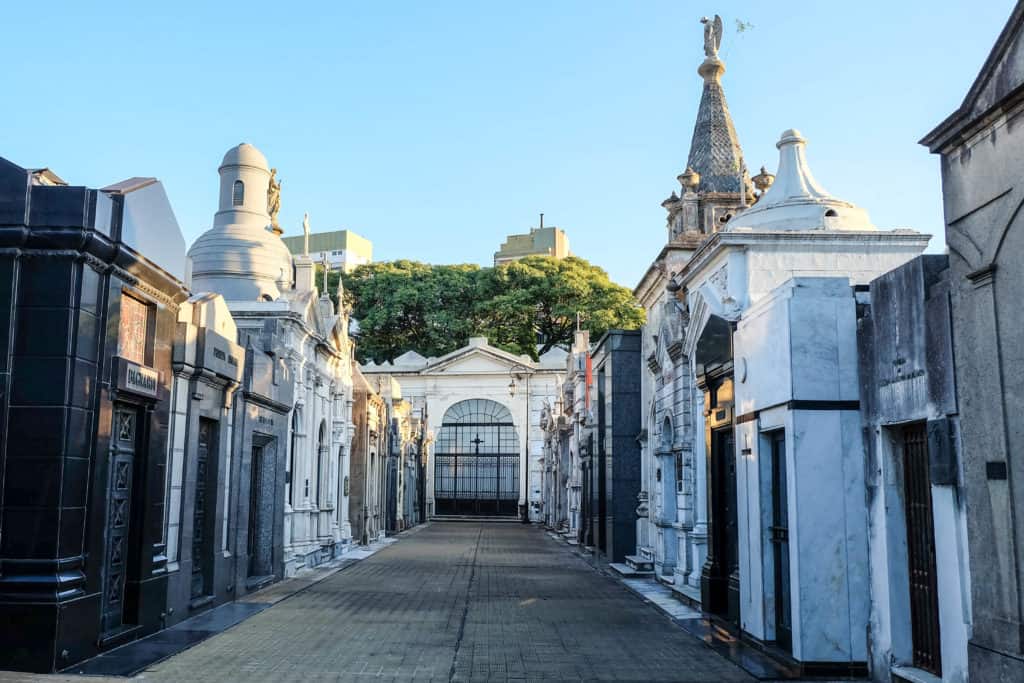 We had one hour before closing time when my friend and I walked through the gate to the cemetery. The soft evening light pierced its way through the trees and lit up the marble mausoleums on either side of me. The large tour groups had come and gone and the cemetery was finally peaceful, much in contrast to my first visit when I was in one of those tour groups.

The music of the street artists in the streets just outside La Recoleta Cemetery was fading with the waning light as we struggled to find our way to Eva Perón’s vault. Despite not being aficionados on Argentinian culture, this was one of the notable vaults we came to see. We weren’t the only people who were lost in the cemetery, the remaining stragglers were also scrambling, asking around to see if anyone had found Eva. After a few dead ends (no pun intended), we were finally on the right track to find Eva. 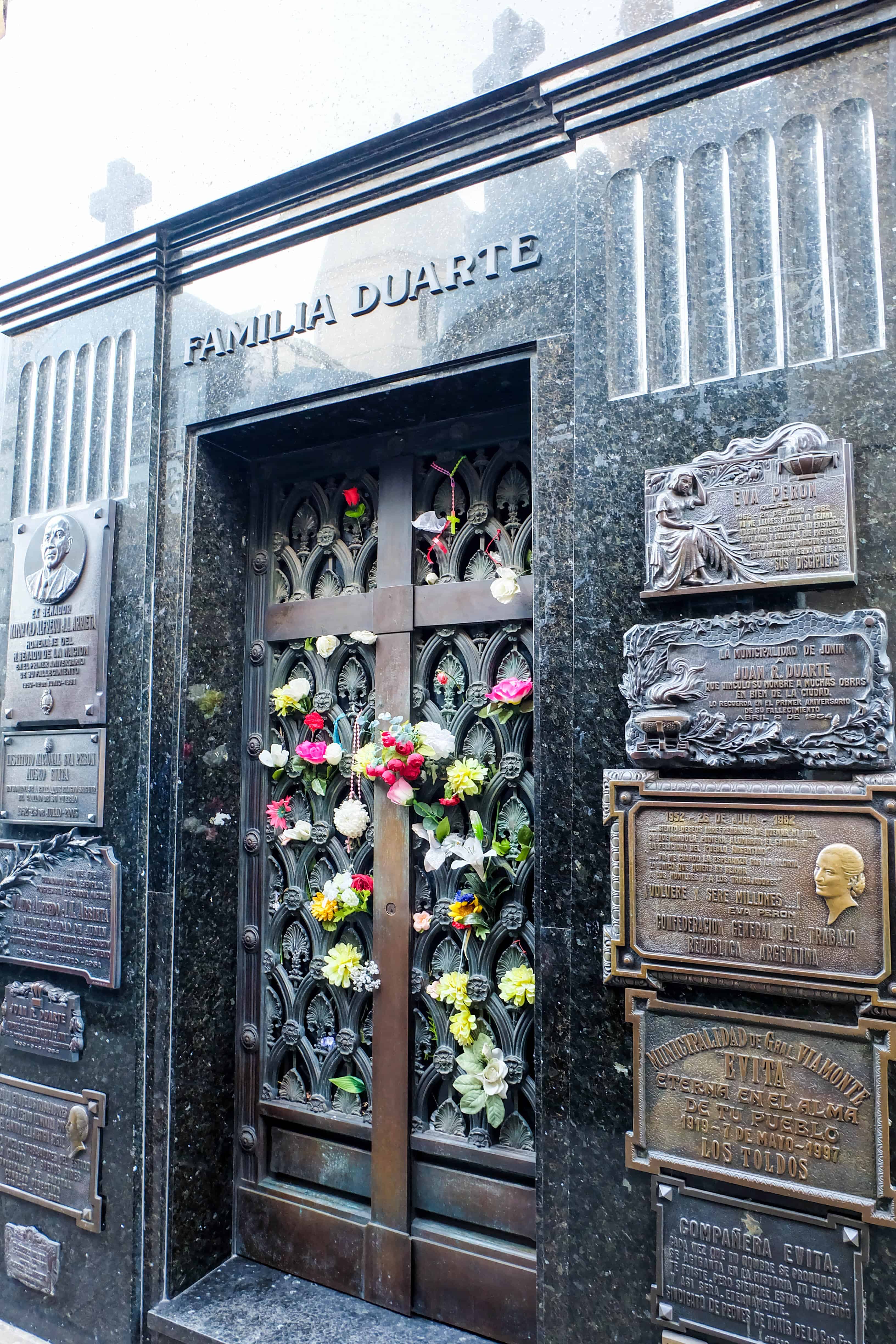 As we descended upon Eva’s mausoleum, I explained to my friend about the controversy surrounding Eva’s resting place, how her body was buried in Milan under a fake name, exhumed, placed on display in her ex-husband’s home in Spain, and finally returned to Argentina. It’s kind of unbelievable how well-traveled she was even after death. I also couldn’t believe how normal her vault looked in comparison to some of the other fancier tombs in the cemetery. She kept her humility in check even in death. 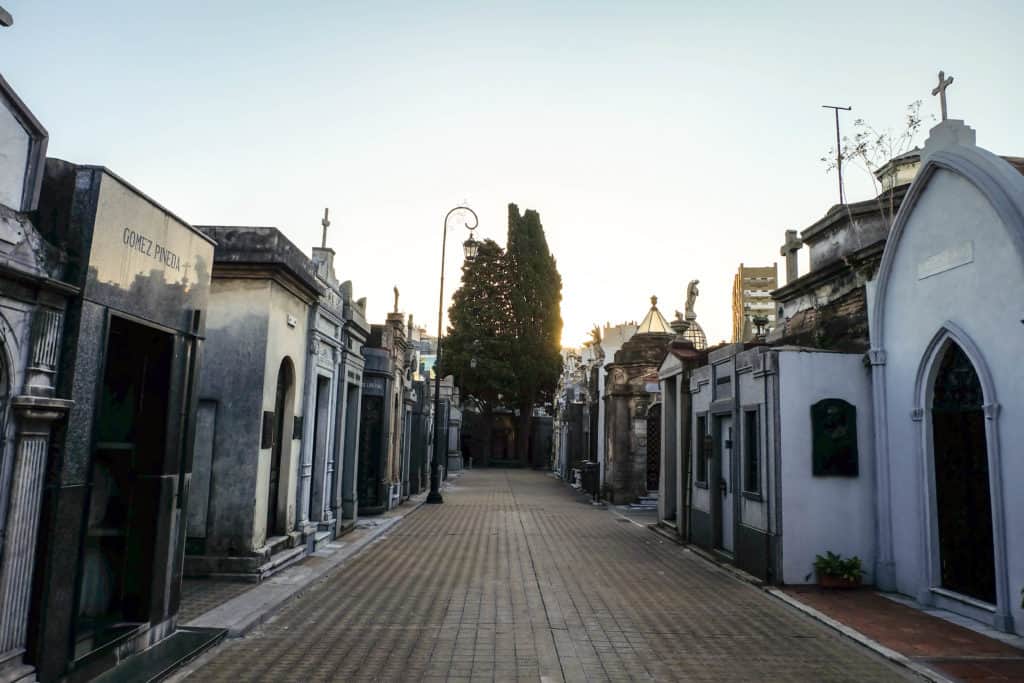 Some visitors just strolled the quiet street-like walkways between the mausoleums, occasionally stopping to peer inside the windows to see what was inside. Some vaults were perfectly preserved and adorned with fresh flowers (or colorful fake ones). Others had shattered windows and cobwebs hanging from the broken panes of glass. 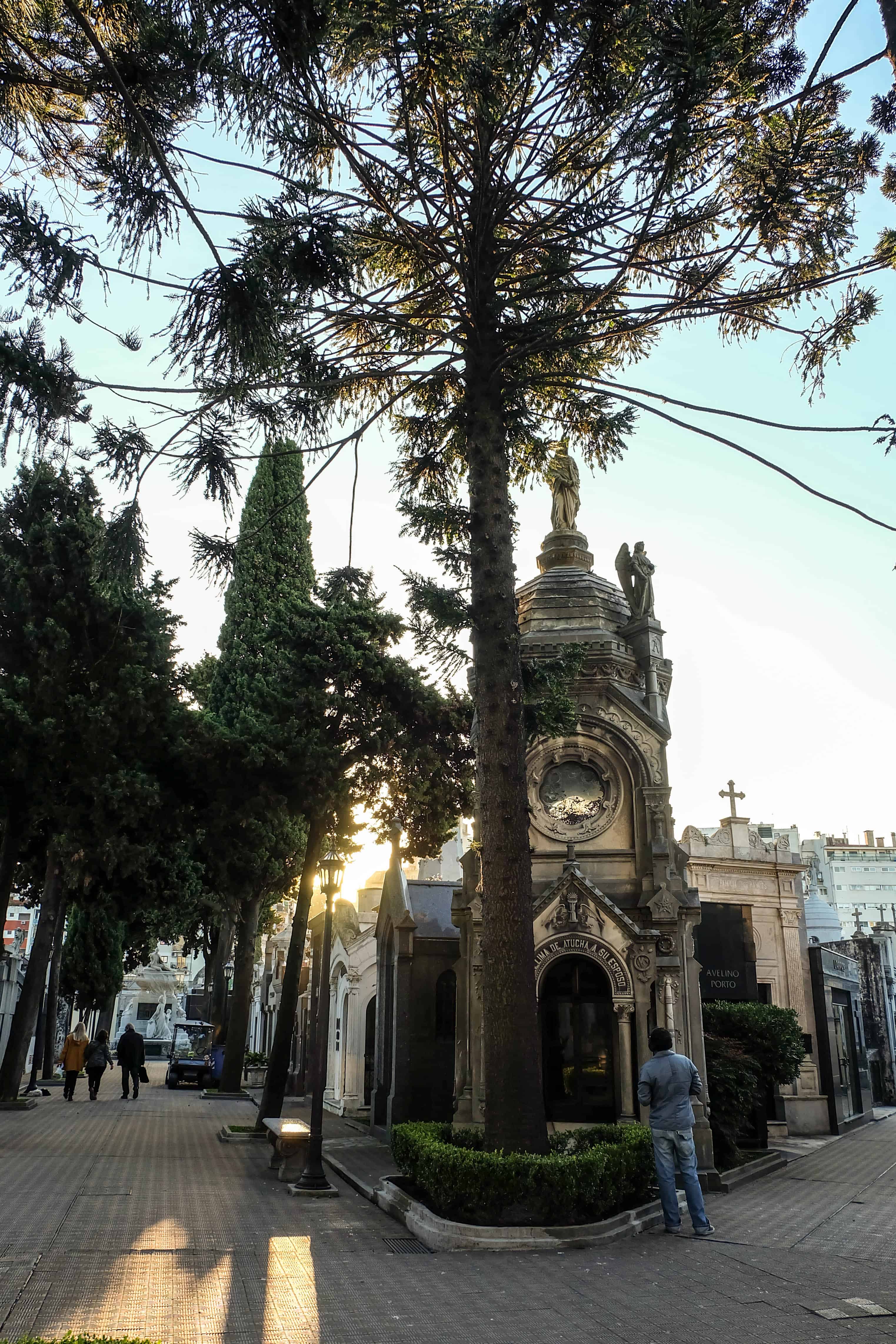 We continued to explore the “streets” of La Recoleta Cemetery. It was easy to forget we were in the middle of a real city as we walked within the walls of the cemetery. We paid respects to people we would never know as we passed by giant, ornate vaults and crumbling statues alike. 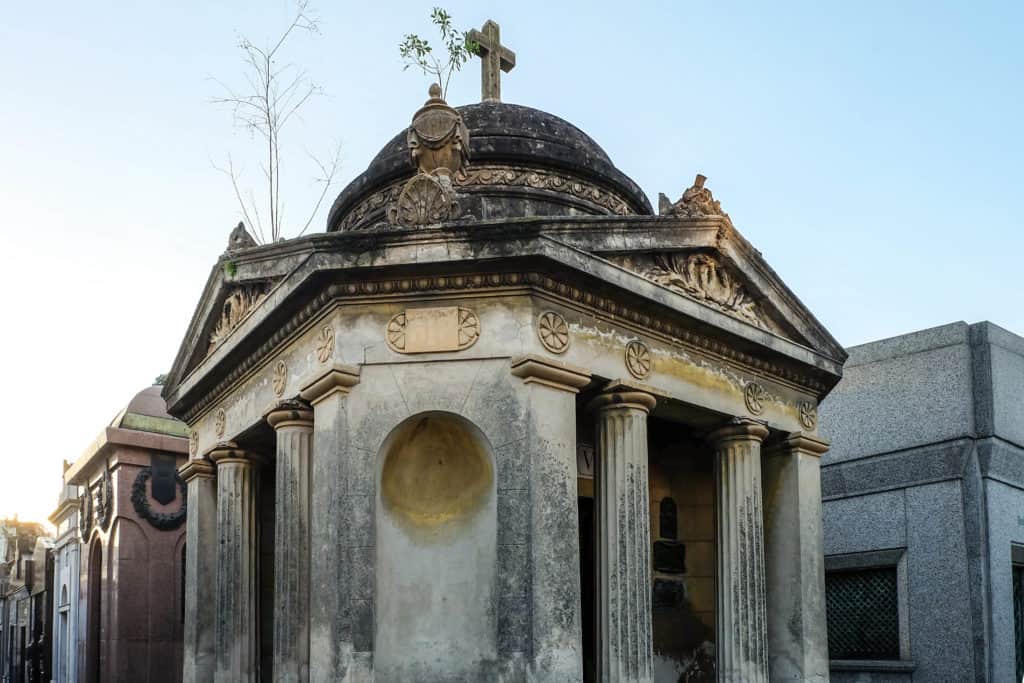 Although cemeteries can be sad and somber places, the mausoleums in La Recoleta seemed to carry some sort of stature as well. I respected how significant it was for families to preserve their loved ones’ stories and lives through these beautiful, “larger than life” structures. Usually cemeteries are located outside big cities, not inside them. I liked how the city of Buenos Aires wants to keep the history and memories of its important citizens close to home.

Romance In Argentina: 5 Things To Do With Your Significant Other In Buenos Aires